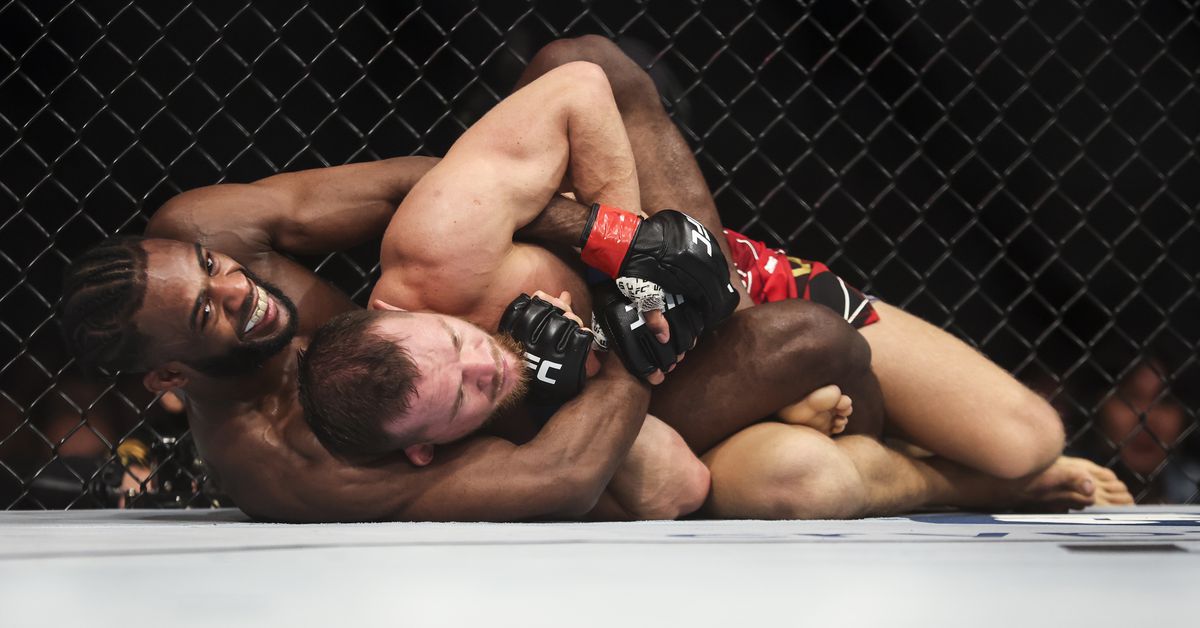 Scoring in MMA was once again a hot topic this week after Joe Rogan suggested some changes to the current unified rules, which already happened to be in place. As it always does, the debate rages on.

Catching wind of Rogan’s comments about damage being a priority over control in the scoring criteria, former three-time UFC title challenger, Chael Sonnen, entered the conversation Thursday. Despite that one time Sonnen joked saying he thought you only lost the round, and not the whole fight when being finished, he’s well familiar with fighting to a decision with 20 in his 49-fight career.

As dominant as they came in the wrestling department, Sonnen believes clarity needed to be provided regarding the lack thereof about the criteria’s assessment of damage.

“Being aware of that, realizing that was a half a decade ago [when the rules were updated], realizing that the UFC champion (Aljamain Sterling) did not know enough to correct the No. 1 voice of the UFC… I gotta tell ya, I’m with them,” Sonnen said on his YouTube channel. “I’m with Sterling and Joe, and I’m well aware of what the rule is. I don’t know that I fully agree that Joe misspoke and that Sterling himself didn’t know the rule. Perhaps they did. But I still somewhat see it in their regard, I really do.

“I’m well aware that the rule says it’s damage over control but that is extremely speculative. That is very open for interpretation and how much damage takes precedence over how much control, I don’t believe you. If somebody’s on their feet, boom they land a straight, boom they land to the body. Those are the two shots, no one else hits anyone for the rest of the round. That comes out, that’s well less than a 10th of a second for those two shots to happen. The other guy takes him down and absolutely controls him. Essentially what Sterling did in his last fight to [Petr] Yan. The only damage that was done if we’re determining that damage can only be done by strikes, that gets interesting. That would make sense that the only way you can do damage is with a strike. If one guy hit the other guy twice in a round and the other guy hit them zero times in a round… Certainly, the damage must have been done by the guy who did [landed] — I don’t agree. I’m not ready to say yes. I would have to see the round.”

Applying the comparison to Sonnen himself as an MMA fighter isn’t quite reasonable as the West Linn, Oregon native was one of the best and most active ground and pound fighters of his era. The damage he dished out was always apparent via his high volume strikes, but back in his collegiate wrestling days, that was a different story.

Obviously, MMA isn’t collegiate wrestling and vice versa. But the disruptions of gameplans and implementation of frustrating an opponent is all too common in MMA and, in a way, damaging the other competitor, argues Sonnen.

Due to the complexity of a sport like MMA, many believe the scoring criteria needs to be a little bit open to interpretation the way that it is. On the other hand, straight-up clarity such as a knockdown equaling an instant 10-8 is also always an enticing idea. Ultimately, at present, it’s simply a matter of perspective using the material given.

“If you take a guy down and he’s trying to get up the entire time, I think Petr Yan would be a fine example. Yan was not staying down [in the Sterling rematch], he was not looking for triangles, he was not looking for armbars, he was not comfortable on his back, he was not wanting to be in that position. He was trying to get off the bottom so desperately that he turned his back. He said, ‘To hell with everything if this is what it’s going to take.’ He demonstrated a very clear preference that he did not want to be in that position. So how you gonna rate that? Where within the unified rules does it say that [damage can only be done with a strike]? It doesn’t. It says damage.”

Nope. Alan Belcher reveals UFC stopped him from boxing on a Roy Jones Jr. card in 2006.

Between the Links featuring Joe Solecki.

The DC Check-In with Joanna Jedrzejczyk.

Heck of a Morning. MMA Fighting’s Mike Heck discusses whether or not Joanna Jedrzejczyk’s long layoff help or hurt her at UFC 275.

This weekend won’t be the first time Joanna and Jiri shared a card together. One of the first times I saw either compete in MMA was on the Fight Nights Global: Battle Of Moscow card back in 2013. They both looked a bit different. pic.twitter.com/LVqZ28il6p

One hell of a wrestling tag team.

Is that blue steel?

Pro tip for PRO fighters: if you are on the right side of the face-off photo (as you look at the stage), go southpaw even if you’re not. Being in your “proper” stance in that moment isn’t as important as people seeing your face. Marketing, recognizability, branding, etc

I just seen a comment about messi scoring the most goals ever or something,
And I shit you not the 1st comment underneath it was… ‘’yes but Ronaldo’s better‘’
Point? You’ll never be good enough ever.
We are reaching a scary level of stupidity day by day on this earth…

This guy @NoBickal is crazy af! He’s asked me to set up grappling matches with the following, all on the same night… @dc_mma khabib, gsp, ben askren and chimaev as an alternate If someone backs out. Lol… would you guys pay too watch this?

GSP once again reminds us why he’s the GOAT. What a jerk.

Happy Friday, enjoy the weekend, and thanks for reading!

Do the unified rules of MMA need more clarity when it comes to scoring a fight?