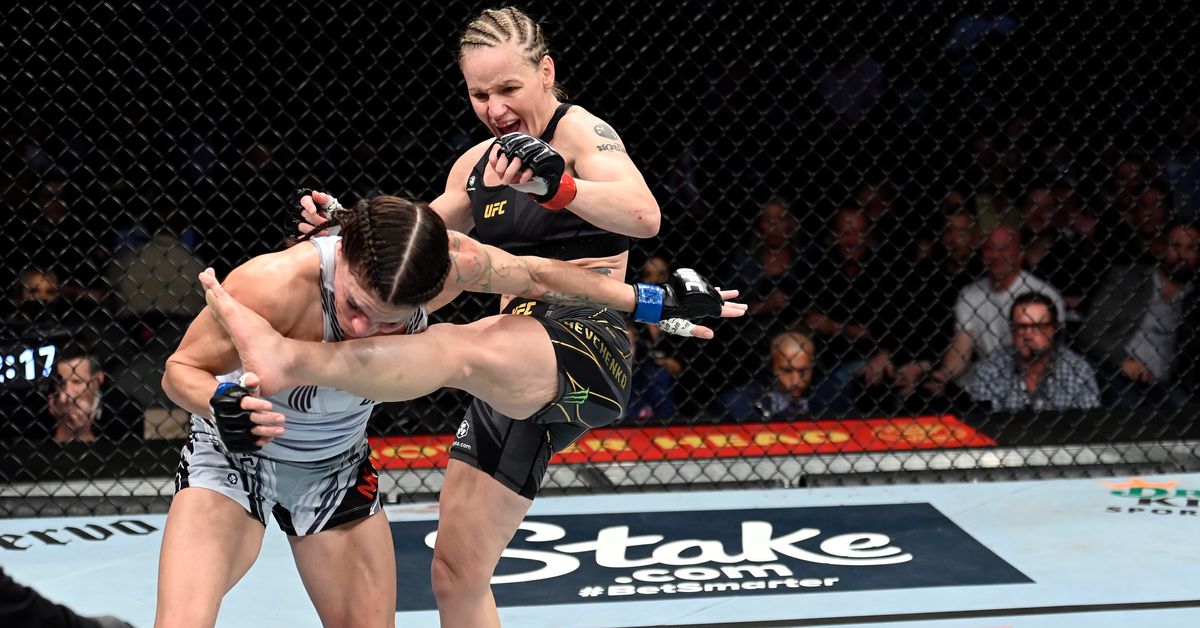 Is Valentina Shevchenko the greatest female fighter of all time? Since dropping to her appropriate weight class of 125-pounds, Shevchenko has been ridiculously untouchable, pretty effortlessly dominating any woman who dares to show up in her weight class. She’s a massive favorite in every title defense, to the point that the promotion is considering sending her back to the Bantamweight title mix to mix things up.

Santos cannot claim to have Shevchenko’s skill set or resume, but the Brazilian is arguably her most formidable threat since at least Jessica Andrade. Lots of contenders enter fights vs. Shevchenko as huge underdogs, but at least Santos hits hard enough to claim a somewhat realistic puncher’s chance.

Let’s take a closer look at the keys to victory for each woman:

Keys to Victory: Shevchenko rarely wastes a movement. She manages range so well that she’s able to really dial into her opponent’s offense and strategies, setting traps with check hooks and heavy kicks. If at any point her opponent gets too wild, expect Shevchenko to toss them in the clinch.

Clinch takedowns seems like the wise path here. Sure, Shevchenko went toe-to-toe with Amanda Nunes at her peak for 25 minutes, but why trade with the power puncher if it’s not necessary?

The strategy here is similar to her fight vs. Andrade, though she won’t enjoy a height and reach advantage this time. Regardless, Shevchenko has the footwork and skill to kick and counter at distance in a relatively safe fashion. When Santos comes forward with a big swing — and she will, it’s her style — Shevchenko can duck into the clinch and work to trip.

Once on top, Shevchenko is damn good at advancing position while wearing his foe down with control.

Keys to Victory: Santos is one of the most athletic women in her division. She’s quick and hits hard, which instantly makes her a more interesting and dangerous threat than many. She’s finished 10 of her opponents via knockout, as well as another three via submission.

Regardless of their personal styles, most Shevchenko foes face a similar challenge on the feet. At range, Shevchenko is crafty with a deep arsenal of kicks, so that’s a no-go. In close, Shevchenko is likely to flip the script with her clinch throws, so that leaves the pocket as the only desirable distance.

Santos isn’t really a boxer, someone who can inch her way into the pocket with six-punch combination and capitalize with defensive head movement. Fortunately, Santos does have the style of movement that can allow her to close more distance than expected, often with powerful punches like the overhand or left hook.

If the goal is to catch Shevchenko off-guard with a sudden advance, then, the key here is feints. Santos has to constantly be showing Shevchenko false starts, feints, broken movement — anything to dull Shevchenko’s defensive reactions. Keeping Shevchenko guessing is a difficult goal, but it’s an essential one if Santos is to land a fight-changing shot.

This is a better women’s Flyweight title match up than most.

Shevchenko is on track to become the first athlete — man or woman — to fill up her fancy new UFC belt with rubies. She’s brutally dominant and defending her belt at a solid pace with few interruptions. At 34 years of age, things have to fall apart for Shevchenko at some point in the next few years, but she’s shown no signs of slowing down.

Victory here likely sets here up for a one-off at 135 lbs.

Few expect much from Santos, but the same could be said of Julianna Pena last year. It’s a similar situation: Santos has the opportunity to shock the world and make history by dethroning a dominant champion. The Brazilian certainly has the physical tools to take the crown, but it’s up to her to make those gifts matter vs. “Bullet.”

At UFC 275, Valentina Shevchenko and Taila Santos will throw down in the co-main event. Which woman walks away with the title?