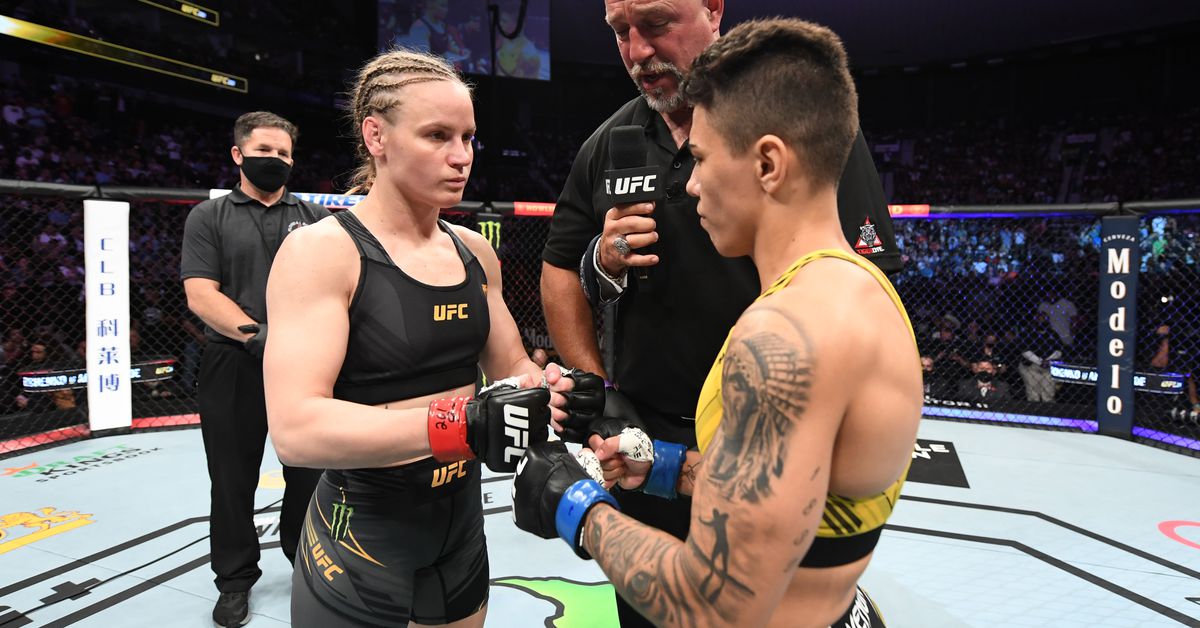 Valentina Shevchenko is a massive favorite going into her UFC 275 fight with Taila Santos this Saturday in Singapore, but former foe Jessica Andrade sees a path to victory for her fellow Brazilian.

Andrade challenged Shevchenko in April 2021 after stopping Katlyn Chookagian in violent fashion in her flyweight debut. But at UFC 261, she was dominated by Shevchenko, who five months later finished Lauren Murphy.

Now, Santos gets her chance at the gold after winning four straight inside the octagon.

“I think Valentina is very tough,” Andrade said in a recent episode of MMA Fighting’s Trocação Franca podcast. “It’s not because I lost to Valentina, but the level of experience she has in fighting and martial arts is so high for a girl that doesn’t train with too many people. She’s so talented, but Taila is on a rise.”

Santos won decisions over Molly McCann, Gillian Robertson and Roxanne Modafferi before submitting Joanne Wood in under five minutes to improve to 19-1 in the sport and earn a shot at the 125-pound queen.

Andrade expects Shevchenko to employ a game plan similar to what she used against Chookagian and Jennifer Maia.

“Valentina has different fighting styles depending on the height of her opponents,” Andrade said. “She was more technical when she fought Chookagian, getting in and out. She closed the distance when she fought me, because I’m shorter than her. I believe with Taila, she’ll respect the distance more and find the right time to hit, and that might help her like it helped Jennifer.

“If Taila studies her game well, maintains the right distance and connects with good strikes, I believe Taila comes out with the victory. Taila is very tough, but Valentina is special, man. You have to go in there knowing she’s unique. You either don’t give her any respect and go for the kill right away, or you stick to the game plan. If you move one tiny bit away from your game play, she gets the advantage and then you’re in deep trouble [laughs].”

Andrade moved from Niteroi, Brazil, to train full-time at the UFC Performance Institute in Las Vegas. She met the Shevchenko and her sister, UFC flyweight Antonina Shevchenko, multiple times in the facility, but said the champion never agreed to training with her.

“It would be great for me, even for the confidence,” Andrade said. “Or maybe I’d say, ‘Yeah, this woman is so good, what am I getting myself into here? Forget the flyweight title.’ [laughs] Or maybe I’d say, ‘Man, I have what it takes to win. If I do this and do that, I’d kill her game and it would work.’ It would be good for both of us if we trained together one day.”

However, Andrade agrees that being a possible opponent for Shevchenko down the line means the flyweight titleholder is smart to decline working with her.

“It would be a different Jessica [in the rematch] because I know how more about her game and what she brings to the fight, and maybe would be more prepared for whatever happens,” said Andrade, who stopped Amanda Lemos and Cynthia Calvillo in her most recent bouts at strawweight and flyweight. “But it’s OK. I think that’s why our schedules never match [laughs].”

UFC 218: Michelle Waterson vs. Tecia Torres Staredown – MMA Fighting
Jose Aldo will compete against Alberto Emmanuel Zambrano in pro boxing debut next month
Kattar Lands a 💣 !!
Conor McGregor accused of attacking woman on his yacht in July: ‘He is a criminal’
Watch The MMA Hour with Edwards, Masvidal, Woodley, and Nicolson in studio now