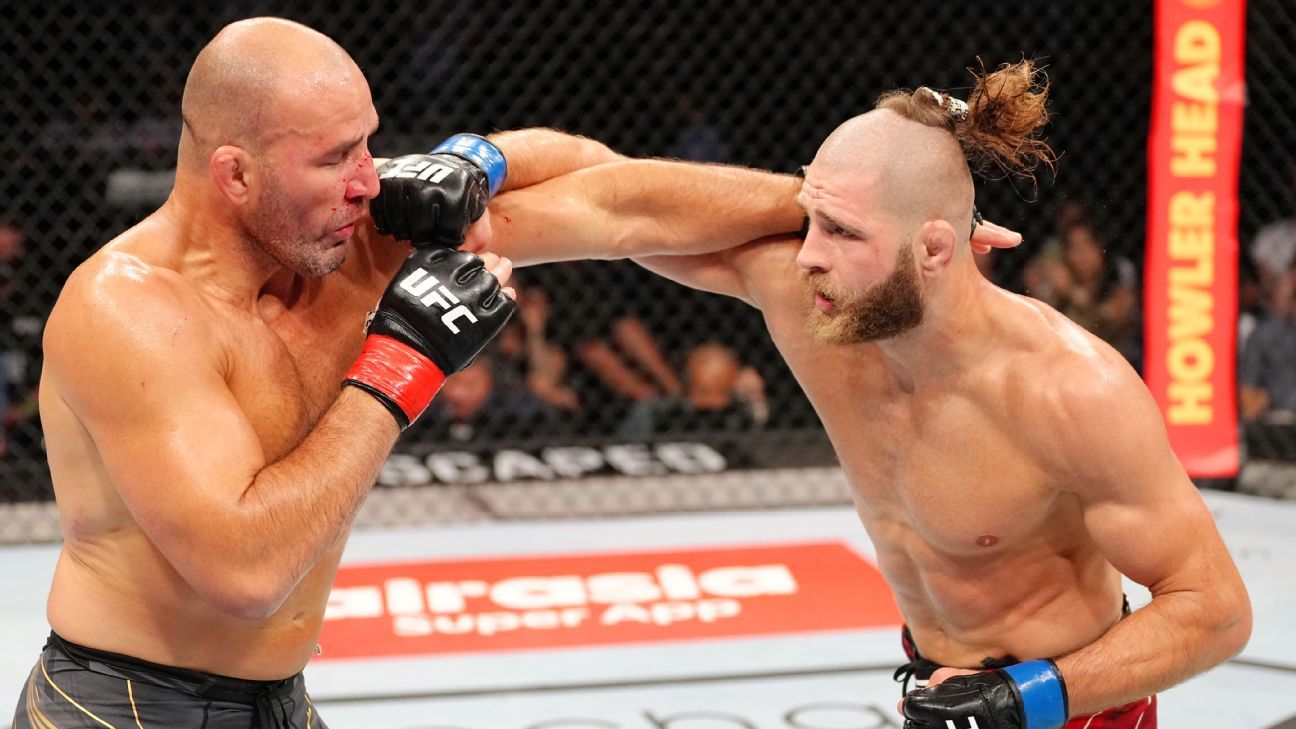 What were the biggest moments at UFC 275? Jeff Wagenheim, Brett Okamoto and Marc Raimondi offer up their takeaways from a highlight-packed event in Singapore.

Are you not entertained?

The UFC has a dozen champions, and there is not one as inventive as its newest, light heavyweight Jiri Prochazka.

It took the 29-year-old Czech only two UFC appearances to earn a shot at the belt. But once that opportunity was upon him in Saturday’s UFC 275 main event in Singapore, Prochazka took a long time — nearly the full five rounds — to wrestle the title away from Glover Teixeira. And adding to the last-minute drama, Prochazka captured gold in the most unexpected way.

While Prochazka showed off his flashy, all-angles striking attacks for much of the fight, he ended up beating the champ at his own game, choking out jiu-jitsu ace Teixeira with just 28 seconds remaining in a bout that the challenger was about to lose on the scorecards. 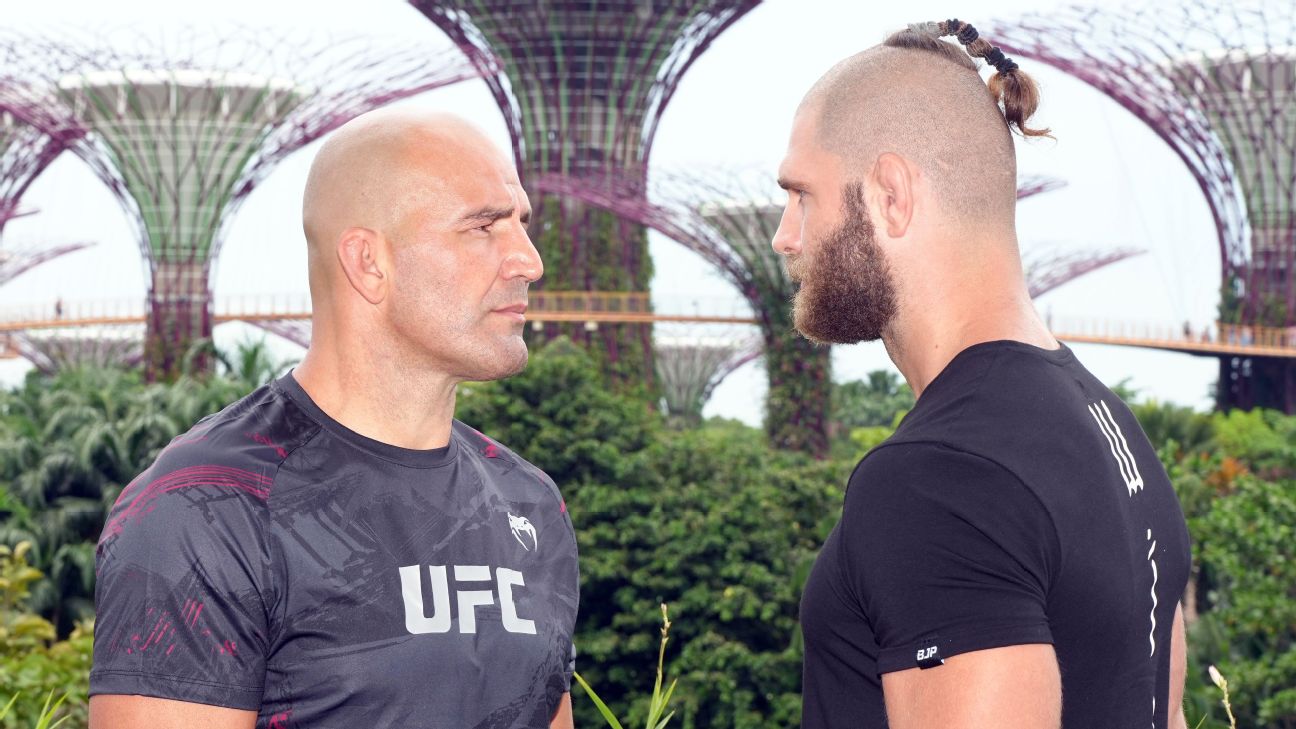 If the PPV was purchased, all fights from UFC 275: Teixeira vs. Prochazka will be available to watch on ESPN+.

There goes Prochazka inventing a new way to show off his free-flowing creativity.

Look out, 205-pounders. The new champ is 29 years old and could reign for a while. Anyone who earns a booking against him is going to have a tough time finding training camp sparring partners capable of mimicking this guy.

But it wasn’t entirely inventiveness that won this fight for Prochazka. He had to dig deep against Teixeira, 42, who was the oldest first-time UFC champ and was not about to be dethroned easily after 20 years to get to the top. Teixeira got takedowns in four rounds and used dominant ground positions to threaten submissions and deliver damage with elbows and punches. The champ appeared on the verge of a decision win when Prochazka reversed position and secured just the third submission of his 29-fight pro career.

Yes, Prochazka leaves himself open for counters while he goes on the attack. And yes, he allowed himself to be trapped in bad positions on the canvas for long stretches. But he defended well on the ground and several times found his way back to standing, something not many fighters have done once under a Teixeira blanket.

And once back on his feet, Prochazka continued to show off unorthodox standup techniques seemingly coming out of nowhere. He landed shots that would have finished a fighter without Teixeira’s toughness.

About that toughness: Although the finish was a disappointment for Teixeira, especially the way it went down and at what time it went down, he can be proud of his short reign. Teixeira came in as a rare underdog champion and did not look like one. He absorbed everything his challenger dealt out, even when it appeared the end was near, and he was in control in the final minute. He would still be the champ if he rode it out to the horn. But that’s not how Teixeira rolls. He went for it.

And so did Prochazka, who now owns the shiny gold belt for his never-say-die efforts. — Wagenheim

Santos should get rematch against Shevchenko

At UFC 275, Valentina Shevchenko looked human for the longest period of fight time during her reign as UFC women’s flyweight champion. And Taila Santos deserves all the credit for that. Potentially being hesitant to feel Santos’ big power, Shevchenko’s game plan was to take things to the ground. The problem was that Santos was as strong as her and out-hustled Shevchenko in scrambles, ending up in top position several times after Shevchenko’s takedown attempts.

Shevchenko ended up winning the fight and retaining her title via split decision. It was not a robbery, but the judge who scored it for Santos was not outright wrong. A case could be made that she won three out of five rounds Saturday in Singapore. On top of that, Shevchenko and Santos clashed heads in the third and fourth rounds, causing major damage to Santos’ right eye, which was essentially swollen shut late in the fourth round and beyond. Santos still managed to gut it out until the end, even getting solid offense in with one eye.

For all those reasons listed above, Santos should get a rematch against Shevchenko. There are no other clear top contenders for Shevchenko at the moment. Shevchenko vs. Santos 2 should be the next fight for both. Not just because Shevchenko could not dominate or execute her game plan perfectly. But the head clashes must be taken into account. Those were not legal blows that damaged Santos, and who knows what would have happened had Santos not sustained that level of damage.

After the fight, Shevchenko mentioned the long, 30-hour trip to Singapore. Maybe that played a factor in her lackluster performance, as well, though you cannot take anything away from Santos. Maybe Shevchenko would also be open to a rematch considering those factors. Surely, she isn’t satisfied coming off her worst performance as champion.

Now, Shevchenko has spoiled us. She’s been so dominant, so nary invulnerable, that no one expects her even to lose a round. That bar is an impossible one to maintain; just ask any dominant champion the UFC has ever had, save for Khabib Nurmagomedov. Shevchenko is allowed to have an off night — and she still won. All the more reason to see what would happen if the two battled again. — Raimondi

Zhang could not have been any more impressive

I’m pretty floored by how good Zhang looked. And I don’t say that lightly because, of course, I expected her to look good — she’s one of the best fighters in the world, period. She’s in her prime. She was favored to beat Joanna Jedrzejczyk. But just how good she looked- it was fun to watch and it’s good for the 115-pound division.

Jedrzejczyk retired immediately after the bout, and it’s fair to question how solid the fighter’s last performance was. I’m not doing that here. I thought Jedrzejczyk was very motivated and fought at more or less the level at which she has her entire career. Zhang was simply dominant. Her wrestling was extremely impressive, adding a powerful, additional wrinkle to her game. She’s always been one of the most physical athletes at 115 pounds, but she’s added timing and technique to that physicality on the grappling side.

Obviously, the finish showed creativity and a high danger factor. She’s going to be favored to beat Carla Esparza when they square off and if she reclaims the belt, she could be one of those stories of a champion who got the belt, lost it, learned from it, and goes on to have a long title reign. I see that potential in her. — Okamoto