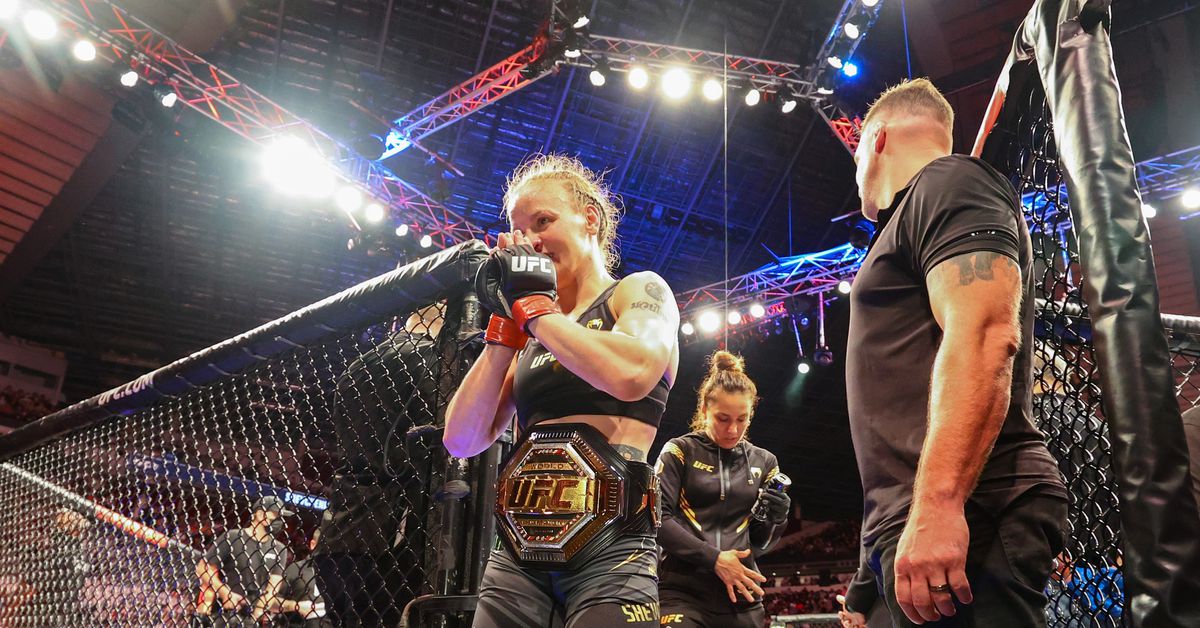 UFC 275 went down last night (Sat., June 11, 2022) in Kallang, Singapore featuring a championship doubleheader on ESPN+ pay-per-view (PPV). In the main event of the evening, Jiri Prochazka pulled off a Hail Mary submission win over Glover Teixeira in the fifth round to with the Light Heavyweight title (highlights). In the co-main event, Valentina Shevchenko survived a very tough Taila Santos to retain the women’s Flyweight strap, while Zhang Weili sent Joann Jedrzejczyk into retirement with a thrilling spinning back fist knockout (see it here).

Who He Should Face Next: Smith vs Ankalaev winner

Prior to the title fight between Teixeira and Prochazka, Ultimate Fighting Championship (UFC) president, Dana White, revealed that the upcoming bout between Anthony Smith and Magomed Ankalaev would indeed be a title eliminator fight. Now that we have a new king at 205 pounds, he has the advantage of knowing who he will face next and he will be an interested observer when these two men collide on the main card of UFC 277 on July 30 in Dallas, Texas.

Who She Should Face Next: Let’s wait and see…

It wasn’t easy, but Shevchenko managed to retain her 125-pound title by winning a split-decision win over a very game Taila Santos, giving her consecutive title defense number seven, passing Ronda Rousey in the record books. As far as what could be next for “Bullet,” believe it or not there are several options around the corner. While Shevchenko has pretty much taken out most of the Top 10, there are still several fighters she has yet to face that could earn a title shot in the coming months thanks to a couple of intriguing bouts scheduled. Up first, Alexa Grasso (No. 5) — who is on a three-fight win streak — will battle Viviane Araujo (No. 7) on Aug. 13. A month later, the No. 1 ranked fighter in the division, Katlyn Chookagian, will battle Manon Fiorot (No. 6), winner of nine straight. Chookagian already has a loss to Shevchenko, but she could earn a rematch with an impressive win. The same goes for any of the other three talented ladies.

Who She Should Face Next: Carla Ezparza title fight

It wouldn’t be my choice, but UFC president Dana White stated that the winner of Weili vs Jedrzejczyk would get the next shot at the title. It was an interesting decision given the fact that Weili was coming off two straight championship losses, and Jedrzejczyk was coming off a loss to Weili and had looked less than stellar over the last four years. Nevertheless, Zhang, the former title holder, will get a shot at “Cookie Monster” next, leaving the rightful owner of the title fight, Marina Rodriguez (No. 3), out in the cold for the time being.

Who He Should Face Next: Jack Della Maddalena

One of the most underrated fighters in the Welterweight division, Matthews picked up a huge win over Andre Fialho, knocking him out in the very first round to put him back in the win column following a tough loss to Sean Brady, With the win, Matthews improves 7-2 over his last nine fights inside the Octagon but still finds himself on the outside of the Top 15 looking in. As for Maddalena, who was also victorious on the main card by knocking Ramazan Emeev in the very first round, so why not pit them up against one another? Mathews has been scratching and crawling inside the Octagon for eight years now, while Maddalena is just two fights deep into his Octagon career and is on a 12-fight win streak. While it may seem like an unequal fight due to inexperience at first sight, let’s not forget that Fialho — the man Matthews knocked out — was only four fights deep into his UFC run. Since Maddalena has some hype and momentum behind him, it could be what Matthews needs to break through if he can stop him. For Maddalena, adding a long-time veteran of UFC like Matthews on his win record further strengthens his resume. Because here’s the thing, while Matthews has been in the promotion longer than Maddalena, he hasn’t moved up during his time while Maddalena is already starting to make waves early into his UFC career.

Sterling Announces Cejudo Fight For March
Could this interaction between Thompson and Holland been any more friendly? 🥹
No Bets Barred: Can Stephen “Wonderboy” Thompson turn it around against Kevin Holland at UFC Orlando?
UFC Orlando weigh-in video
Pimblett Countdown To UFC 282