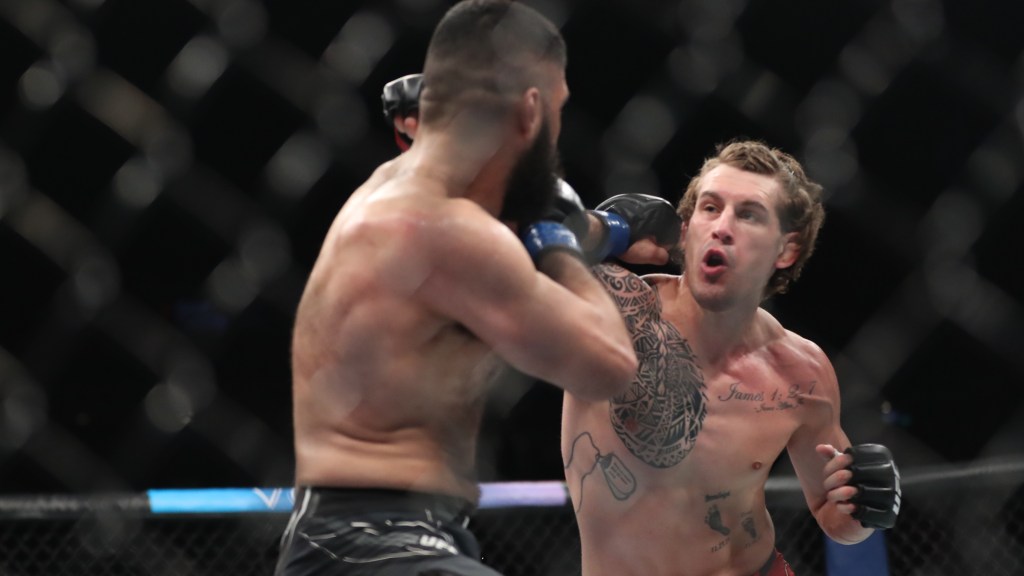 By Matthew Wells and Abbey Subhan |

SINGAPORE – Middleweight Brendan Allen emerged victorious at UFC 275, but he wasn’t at all pleased with his performance.

Entering Singapore Indoor Stadium looking to remain in the win column after a second-round submission win over Sam Alvey, Allen (19-5 MMA, 7-2 UFC) took on Jacob Malkoun on the prelims of the pay-per-view event. While he accomplished his goal of defeating Malkoun (6-2 MMA, 2-2 UFC), Allen wasn’t exactly pleased with how he performed in the unanimous decision victory.

“I’m super disappointed,” Allen told reporters during the post-fight news conference. “I’m disappointed for the fans. I come to fight, I always come to fight. I think we can show from what I was doing or trying to do. Obviously, I was too complacent in the second, I just kind of laid there and hit him a lot from the bottom, but he wasn’t doing nothing. I don’t think I have a mark on my face. I don’t feel anything. He wasn’t doing nothing but holding and this is a fight.

“Overall, I take the responsibility. I should have done more. I shouldn’t have been complacent in the second for whatever reason, but overall, I’m super disappointed in myself, not at him.”

Allen said he expected that type of fight from Malkoun, but felt that he could have done more throughout the 15 minutes inside the cage to make it a more entertaining bout for the fans.

“Fighting a guy like that is always really hard to do because they just want to lay there,” Allen said. “They don’t want to do a whole lot. They don’t try to improve really. Every time he tried to improve, I swept him. Any time I wanted to come up, I come up. Only thing I can really say for him is he had the good single against the cage. I was anticipating it, but I think I worked on it maybe too late. But I started getting that timing at the end and what we worked on. Overall, super disappointed.”

The fans didn’t react well when the decision was read, announcing Allen as the winner, notching his seventh win with the promotion. The Louisiana native feels that is in part to the fight taking place closer to Malkoun’s home territory of Australia in addition to how the fight played out.

“I don’t like to fight like that,” Allen said. “I have 20-something pro fights and none of them have been like that. I’m disappointed for the fans. I come here to put on shows, all my UFC fights show that.”