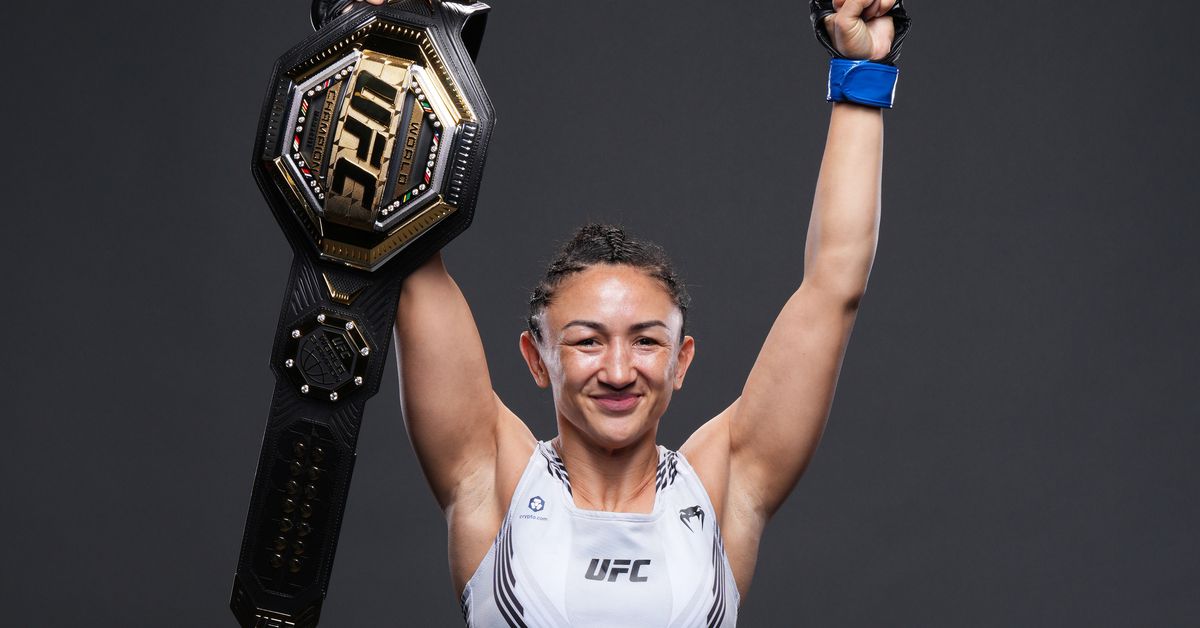 Zhang Weili has suggested a time and location for a potential showdown with Carla Esparza, but the champ isn’t sold just yet.

UFC 275 provided several highlight-reel finishes and memorable moments, one of which belonged to China’s Zhang, who once again picked up a victory against Joanna Jedrzejczyk. A rematch of one of the greatest fights of all time, both women delivered in round one with a mixed variety of action, Zhang primarily outwrestling and ground and pounding her foe before a late Jedrzejczyk onslaught of punches.

Round two saw the action continue to accelerate, and unfortunately for Jedrzejczyk, she marched her way into a lethal spinning back fist that faceplanted her to end not only the fight but a great career.

Before the contest, UFC President Dana White declared that the winner was next in line for Esparza and that will likely hold considering the former titlist’s excellent showing. In her post-fight scrum, Zhang suggested an October meeting in Abu Dhabi at UFC 281 with “The Cookie Monster.” However, the champ isn’t ready to let her challenger call the shots.

“I definitely don’t feel like I’m in a position where I should rush just because Weili wants a certain date,” Esparza told New York Post. “I’m not trying to go on her timeline. I’m the champion, and I feel she needs to go on my timeline.”

Esparza became only the second woman to become a two-time UFC champion when defeating Rose Namajunas, the first two-time champion, via split decision last month at UFC 274. Coincidentally enough, Esparza’s first run with the title also began with a Namajunas victory after their stints on The Ultimate Fighter 20 in 2014.

The inaugural UFC strawweight title didn’t belong to Esparza for long though, as the aforementioned Jedrzejczyk was primed and ready to start her lengthy reign of terror just four months after Esparza won.

“That was honestly a big regret of mine, letting the pressure push me into jumping back so quickly after having gone through so much fighting [on] The Ultimate Fighter. ” Esparza said of her first run with the title. “That was my fifth fight in eight months. It’s really draining. That was a big regret of mine, not letting myself recover a little bit and jumping straight back into it because feeling pressured and wanting to make the UFC happy. But in the end, if I’m losing my title, then what was it all worth anyway?”

Although she is once again the champion, Esparza’s rematch with Namajunas was met with unanimous criticism as one of the worst fights in MMA history, if not the worst.

A lot of the blame from the MMA community landed on Namajunas’ approach and her coaching from partner and former UFC heavyweight, Pat Barry. The pair were very vocal about their thoughts on why they should have been the celebrating party after the fight, but there’s no bad blood towards Esparza.

“You’re in there, you can feel one way, and that’s not necessarily how it looks on the outside,” Esparza said of the Namajunas rematch. “I still felt very confident that I won the fight after watching it, but it was nice to have a better understanding of everything that happened.

“He (Barry) sent me a message, and he was super positive and congratulatory and was basically like, ‘You guys both had a game plan. You guys are both super talented. Nobody broke the other’s will. And that’s just kind of how it goes.’ He was really cool about it. And [I] have all the respect for them.”

Assessment. Anthony Smith on Jiri Prochazka vs. Glover Teixeira: “I think both of those guys had the worst performances of their life”

Bummer. Rani Yahya out of UFC Vegas 58 fight with Cody Garbrandt due to neck injury

Who Had the Best Submission So Far This Year? | Bellator MMA

Not talking trash, but this is real

I don’t give a fuck what any of you say. I’m doin’ this for me. About damn time. To everyone that’s helping me, love you ladies and gentlemen- Champ ❤️‍ -CSO- It’s good to be back, I missed me too ⚔️ # All In pic.twitter.com/bpUEhWeVCJ

As goofy as Floyd exhibition matches are, he brings the eyeballs and I’m always all for more eyeballs on RIZIN. I certainly expect Mikuru to do better than Tenshin, too… Thanks for reading!

Friday: 85% of 334 total votes answered “Yes” when asked, “Do the unified rules of MMA need more clarity when it comes to scoring a fight?”

Wednesday: 94% of 771 total votes answered “Valentina Shevchenko” when asked, “Who wins this weekend?” Shevchenko def. Taila Santos via split decision in the co-main event of UFC 275.

Monday: 78% of 561 total votes answered “No” when asked, “Was the Alexander Volkov vs. Jairzinho Rozenstruik stoppage too early?”

Who is your early pick?