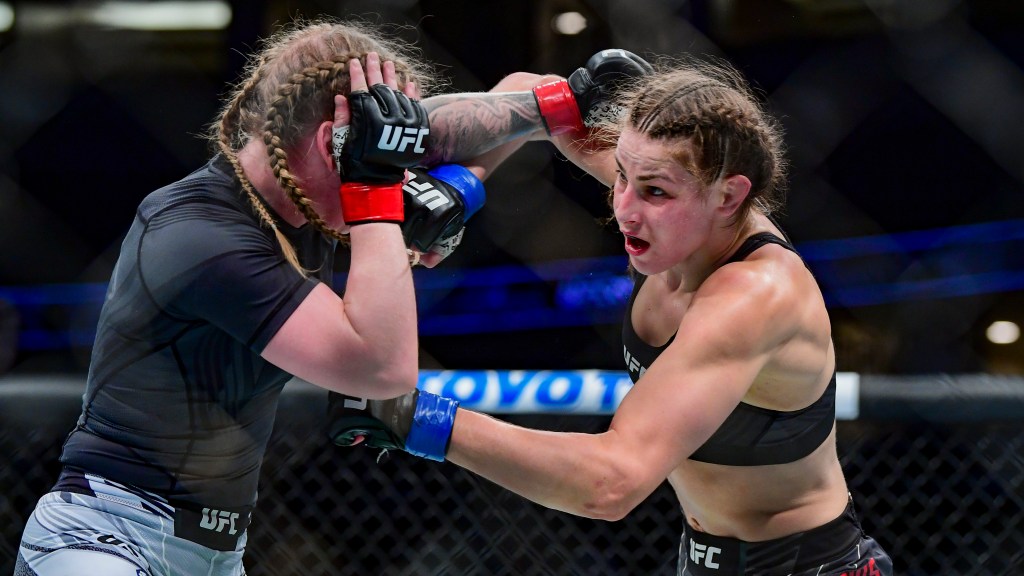 By Farah Hannoun and Nolan King |

Now that her octagon jitters are out of the way, Jasmine Jasudavicius is looking to let loose at UFC on ESPN 37.

Jasudavicius (7-1 MMA, 1-0 UFC) defeated Kay Hansen in her promotional debut this past January at UFC 270. It was a solid performance for the Canadian prospect, but Jasudavicius admits she was being cautious against Hansen.

However, when she meets Natalia Silva (12-5-1 MMA, 0-0 UFC) in a flyweight bout on Saturday’s event at Moody Center in Austin, Texas, Jasudavicius plans on showing off more.

“I was obviously happy with my performance. It was a pretty clean performance,” Jasudavicius told MMA Junkie. “That being said, I didn’t get to, like, f*cking bang. I didn’t get to swang and bang, and so I was playing it very, very safe. I don’t want to go in there for my UFC debut and get a loss. I believe that the only way Kay was beating me is if I put myself out of position, and she exploited that.

“So I was being very calculated with what I was doing, and the game plan obviously worked for that particular fight. For this one, I feel like I’m in the UFC, so I can get a little bit crazy. I’m still obviously gonna be calculated. I’m gonna try to not make any really detrimental mistakes. That being said, I want to open up more in this fight.”

Jasudavicius is one of the few Canadian fighters on the UFC roster. She takes inspiration from former UFC welterweight and middleweight champion Georges St-Pierre and aspires to reach his level of popularity at home.

UFC on ESPN 37 takes place Saturday at Moody Center in Austin, Texas. The card airs on ESPN and streams on ESPN+.

Dana White responds to Nate Diaz tweet ‘Tell me when there isn’t something crazy going on’
Video: ‘Bigfoot’ Silva KO’d For Fifth Time In A Row
Cat Zingano: Cris Cyborg offer wasn’t on table – but I want to ensure drug testing if it happens
Big things are happening in PFL with Bruno Cappelozza and Renan Ferreira
PFL 5: Can Bruno Cappelozza and Anthony Pettis continue their strong 2022?