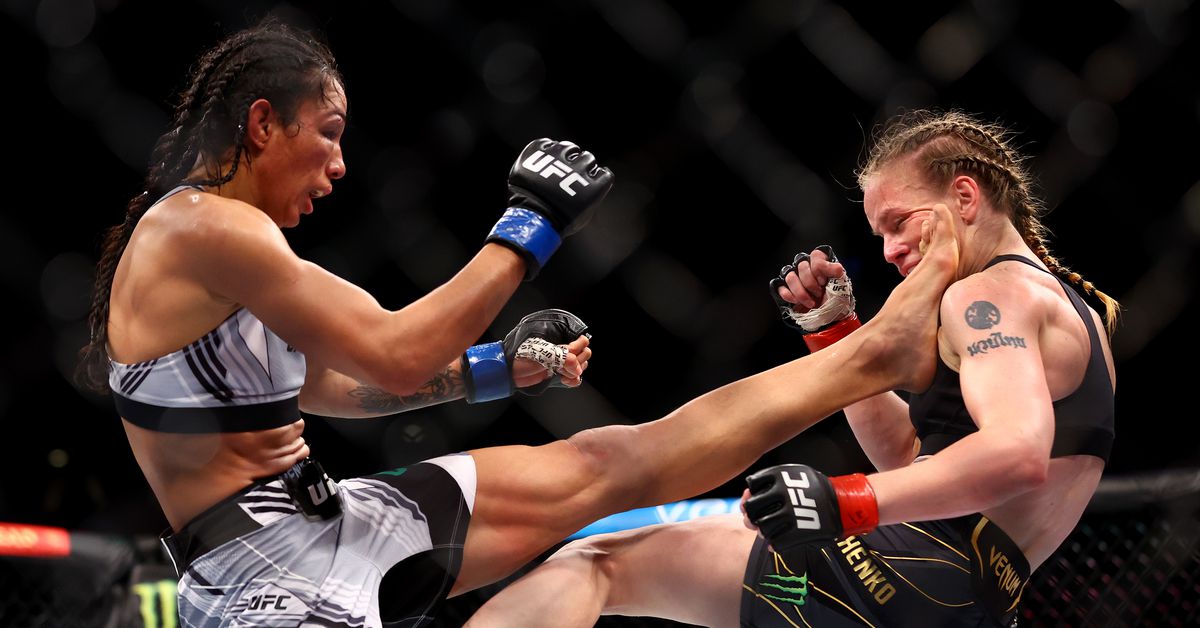 Typically, Shevchenko’s title defenses have been one-sided showcases of the champion’s superior skills in all aspects of mixed martial arts (MMA). That wasn’t the case against Brazil’s Santos, however, as the two battled to a highly competitive split decision that resulted in Shevchenko retaining (watch highlights).

“Everybody sees her as this monster, the boogeyman,” Santos told MMA Fighting. “After I fought her, I could see she’s not all that, you know? She’s very tough and intelligent, of course, but nothing abnormal. I felt very confident. I didn’t feel any supernatural power. The way people talked about this woman, I thought to myself, ‘Wow, I won’t be able to take her down.’ I imposed my takedowns and managed to do everything I wanted. I expected [more from her]. It was easy to [take her down] and get her back. I expected it to be tougher.”

Perhaps the biggest difference-maker in the fight can be credited to an accidental head clash that broke the orbital bone of Santos. As the fight progressed following that critical moment, it began clear quickly that Santos’ vision was being affected. She’ll now undergo surgery in the coming weeks but once cleared to compete again hopes for an instant rematch with “The Bullet.”

“I think that [I won] up until the third round when my eye was still okay, but I still managed to get her down in the fourth,” Santos said. “I ended up getting taken down in the last round but took her down in four rounds. I think the first [three rounds] were mine. I haven’t sat down to analyze the fight yet; I have to re-watch it. But I was able to take her down in the fourth as well and control for a bit, but she got back up quickly.

“I was waiting for [Bruce Buffer to announce] my name,” she continued. “Deep in my heart, I was expecting to hear ‘Taila Santos,’ but that’s not the name he said. But I kept my head high … I’m not going to say I should have won, otherwise the belt would be here with me, but what matters the most is I’m happy with my performance. I’ll get better, train more, and I’m sure this is not my only opportunity [for the belt]. I’m young and I’m sure I’ll show a lot more.”

For Santos, the loss comes as only her second in 21 professional bouts. It remains to be determined what UFC plans to do with Shevchenko going forward, but due to the close nature of the bout, it’s been a fight fans have been interested in seeing run back — especially considering the injury off an accidental collision.

“When I looked to the ground [in between rounds], I could see everything normal,” Santos said. “When the round started and I looked at her, I couldn’t see anything. I freaked out, ‘What am I going to do? How am I going to attack her? I can’t see anything.’ The eye could become a target for her, too. I was scared. I had to find a way. I didn’t know where to hit, so it was quite complicated. I would never quit, but I was scared.”

Do you want to see Taila Santos get an immediate rematch against Valentina Shevchenko?