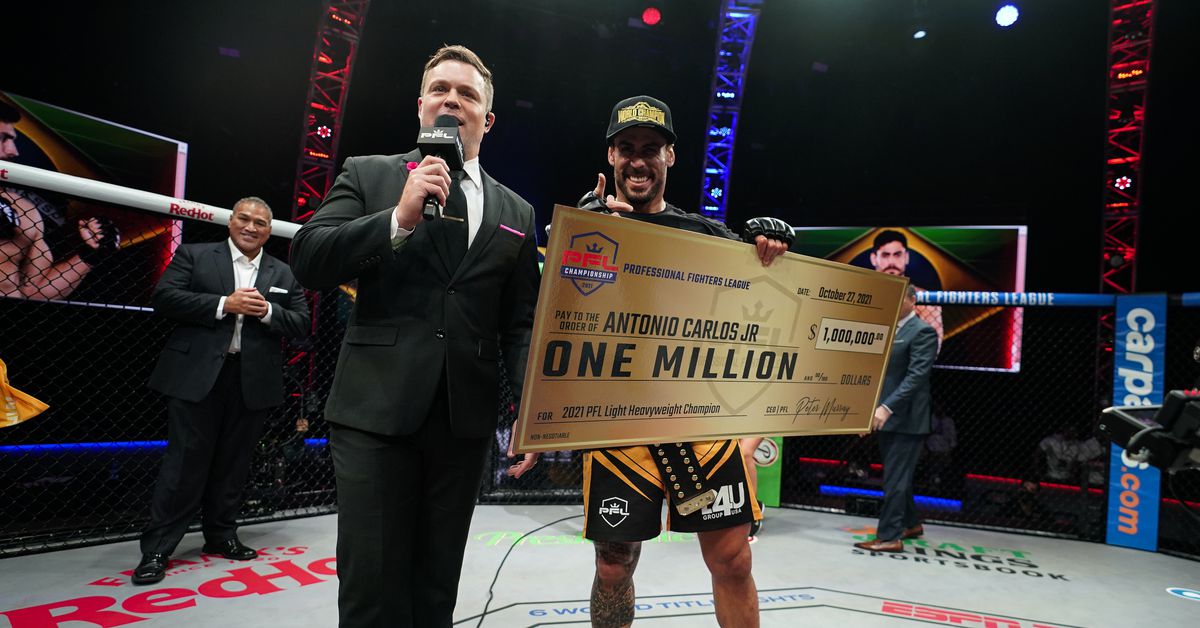 Antonio Carlos Junior wants to make it clear that he holds no ill will toward the UFC. But he said leaving the promotion was ultimately the best possible career move.

The former Ultimate Fighter winner exited the promotion after 13 fights and has since gone 4-0 (1 NC) in five PFL fights. He also earned $1 million as the light heavyweight winner for the 2021 PFL season. It was a huge financial windfall after his previous UFC contract, a 10-fight deal from the reality show.

“Moving to PFL, I’m making a lot more money. I love what I do, but money is also important. We fight for that, too. I made a lot more money last year than I made in my whole career in the UFC. It’s worth it to leave the UFC and go to PFL for sure.”

Earning a seven-figure payday not only helped the Brazilian provide better for his family – it also provided financial freedom to the point where money wasn’t as much of a concern before fights.

While many athletes often live paycheck-to-paycheck in MMA, Carlos Junior benefitted greatly from his success, as it allowed him to prepare even better for the 2022 season.

“I don’t have to worry about the money,” Carlos Junior explained. “I’m just fighting because I like it. I feel more comfortable. I feel no pressure. I’m always fighting as I used to do in jiu-jitsu. When I used fight in jiu-jitsu, I used to fight every month, every two months or whatever. That’s what I’m doing now.

“As I said, you keep the spirit of competition, it’s always alive in you. It’s not like, ‘Oh, I only fought one time this year and the next year is going to be the same.’ No, I want to constantly fight, and this is happening now.”

Aside from the money, the 32-year-old submission specialist also feels like he’s finally starting to truly understand MMA after he got onto The Ultimate Fighter with very little experience. He was just three fights into his pro career when he scored a slot on the reality show. While he has no regrets whatsoever about taking that route, he was still largely learning on the job in the UFC.

“I had to learn with the lions, with the biggest names in the division. It was a tough way to learn, but I finally find a way. I feel I’m at my peak. I feel I’m at the best moment for sure.”

With his next fight scheduled on Friday at PFL 4 in Atlanta, Carlos Junior is ready to go get another win, prepare for the playoffs and hopefully cash another $1 million prize check when the season is over.

“I feel that it was the best thing that I did,” Carlos Junior said about leaving the UFC. “All the PFL is pretty positive. The environment is really great. There is no pressure. Always fighting. I’m constantly fighting. Every two months I’ve got a fight so it’s pretty good. I keep the rhythm and I keep the competition inside myself, I’m always working.”