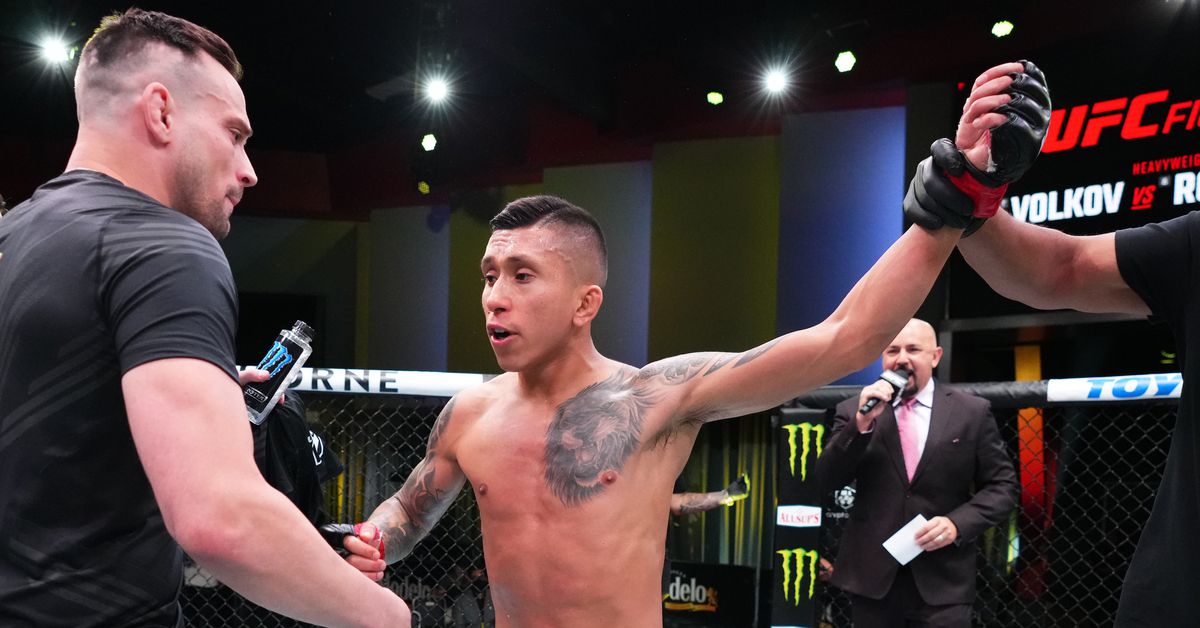 This past Saturday at UFC Vegas 56, Molina won a narrow split decision over Zhalgas Zhumagulov to improve to 3-0 in the UFC since joining the promotion in April 2021. The outcome was in doubt after 15 minutes of action, with even Molina appearing unsure of the outcome. After the first two scores were read out — a 29-28 for Molina and a 29-28 for Zhumagulov — the third was announced as a 30-27, and Molina immediately reacted in disappointment, walking away from the referee before he discovered that he had actually won the bout.

Having had time to review his performance, Molina only feels more confident the judges made the right call, and he explained his dramatic reaction on The MMA Hour.

“I’ve watched that fight at least 10, 15 times now,” he said. “I’m my world’s biggest critic. I’m the same way after every fight. I do think I won that fight. I think the first and third rounds were mine.

“As far as me walking away at the end of the decision, I’ve been on the s*** end of the stick of a split decision before, and I think that maybe that was just the pessimist in me thinking, ‘They gave it to you again.’

“At the end of the fight, I thought I won. I thought I’d done enough. I do remember getting clipped in the second, so I gave him the second just off damage, but I felt that the biggest criteria in the sport is damage, and the first and third round, I had that. He was holding me against the fence. He came to hold me, I came to fight, I think that’s why I walked away with the win.”

It was the tenth straight win overall for Molina, who hasn’t lost a fight since dropping a split decision in his third pro bout to Nate Smith at a Victory FC show in September 2017. He has wins over Zhumagulov, Daniel da Silva, and Aoriqileng, a run that has him just outside the top 15 of MMA Fighting’s Global Rankings at flyweight.

Still, Molina gives Zhumagulov plenty of credit for a competitive fight and also gives himself a bit of a break for having to compete on a UFC event that started at 1 p.m. ET, much earlier than most Saturday Fight Night cards.

“Frustrated with how I showed up that night — or day, I should say,” Molina said. “We fought early as s***. Let your boy drink some coffee before he gets into a fistfight. Our report time was 8 a.m. in the hotel lobby – cup, mouthpiece, ready to rock. Still frustrated at the performance. I feel like it was just an off day.

“It wasn’t my best performance. I’m going to get better from this. I feel like Zhalgas doesn’t have the best track record in the UFC, but the dude’s good. He’s got some big wins outside the UFC. He’s got wins over [Tagir] Ulanbekov, [Ali] Bagautinov, Tyson Nam – two of those guys are UFC staples today in the flyweight division and those were five-round fights. I feel like he hasn’t had the best track record in the UFC and it doesn’t take away from what he’s done in the sport. The guy’s good and he came with a good game plan. I’m just frustrated with my inability to break the bodylock – the dude’s strong against the fence – but I think the judges had it right. I came to fight, he came to hold me, and kudos to him it’s a smart game plan and I’m going to get better from this.”

Molina’s spotless UFC record has made him a target for his fellow flyweights, and shortly after his fight, he was called out by both Ode Osbourne and Muhammad Mokaev, the latter of whom wrote on social media that he’d like to see Molina in France or Abu Dhabi.

The Oct. 22 Abu Dhabi event, currently scheduled as UFC 281, suits Molina’s timeline better as he mentioned that he is targeting that month. Even if it doesn’t happen this year, he believes he’s destined to someday fight the undefeated Mokaev.

“As far as the [Mokaev] fight, we’re going to cross paths in the future,” Molina said. “I tell my manager this, I tell [my head coach James Krause] this, if they like it, I like it. I’ll say ‘yes’ to anything they like. So if they say ‘yes,’ I tell them to sign for me. They don’t even have to talk to me about the fight. Tell me the date, tell me when I’ve got to be there, and tell me who I’m fighting. Me and him will cross paths, it’s inevitable.