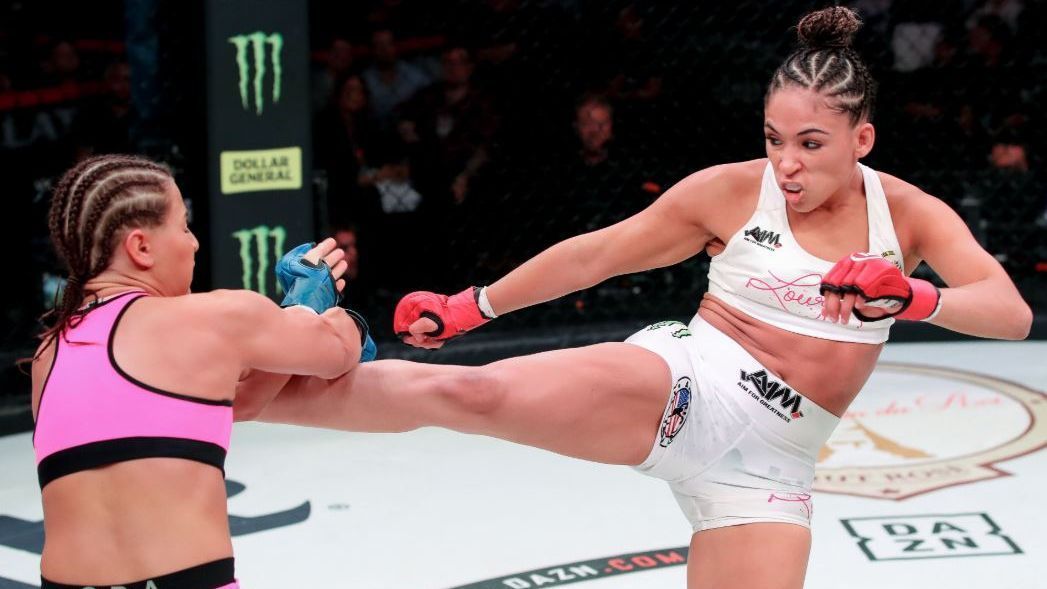 Valerie Loureda, a top women’s MMA prospect with Bellator, has signed a multiyear contract with WWE, she told ESPN on Wednesday.

Loureda, 23, said she’ll move to Orlando from Miami and report to the WWE Performance Center on July 19. She’ll remain under contract with Bellator, the promotion told ESPN in a statement, but now she’ll be a full-time WWE athlete.

“I’m an entertainer,” Loureda said “I love glamour. I love production, I love storytelling. And when I saw the WWE, I realized this is everything I’m good at in one place. Not only that, but I saw the opportunity to be the first Cuban American woman to be a WWE superstar.”

Loureda said she attended WrestleMania and immediately fell in love with the glitz and spectacle of WWE, comparing it to the Super Bowl. She had a tryout in late April and early May with WWE and became so addicted with performing in the ring that she didn’t want to leave even though she hadn’t been signed yet. Loureda said she actually called her manager, Abe Kawa of First Round Management, crying.

“I said, ‘Abraham, I know I don’t have a contract, but is there any way I can stay here? I’m losing a week of training,'” Loureda said. “I just want to get better.”

Sources told ESPN that WWE coaches praised Loureda’s ability and view her as a high-ceiling talent after her tryout, which included a match. Loureda signed with WWE soon after. She will remain under Bellator contract, though, per promotion president Scott Coker.

“Valerie Loureda is a very young and talented athlete who can accomplish plenty in MMA for years to come, but for now we wish her the best of luck as she pursues her dream of becoming a WWE Superstar,” Coker told ESPN in a statement. “She will remain an active and under contract fighter with Bellator, and we look forward to welcoming her back into the cage in the near future. We take great pride in allowing our athletes to test themselves in additional arenas such as boxing and pro wrestling.”

Up until the last few months, Loureda said she was committed to her MMA career with Bellator. But earlier this year, Loureda’s manager Abe Kawa of First Round Management was having a conversation with former UFC executive James Kimball about WWE’s name, image and likeness (NIL) deal with AJ Ferrari, a college wrestler repped by First Round. Kawa brought up Loureda and Kimball, WWE’s senior vice president of global talent strategy & development, was interested.

Kimball suggested Kawa bring Loureda to WrestleMania, but Loureda initially was not interested. She wanted to focus on her MMA career.

“I had to beg her to come out to WrestleMania with me,” Kawa said. “I kept telling her over and over again, just trust me. When you come see this, this is you. I would never take you to something that’s not you. This is everything for you. You will fall in love with it. And she did.”

Loureda said she was sold almost instantly when she arrived at AT&T Stadium in Texas for WrestleMania 38 in early April.

“The moment I stepped into the suite and I saw the WWE organization, the professionalism and the production, I fell in love,” Loureda said. “I had goosebumps like the first time I saw MMA on the TV.”

Loureda, who is 4-1 as a pro fighter and projected to be a future star for Bellator, said her goal is to make NXT television by the end of the year and be on the WWE main roster within one year.

“I have big goals and I’m a little crazy,” Loureda said with a laugh. … “I just know what I’m gonna be able to do in the WWE. There’s no limits. I’m limitless.”