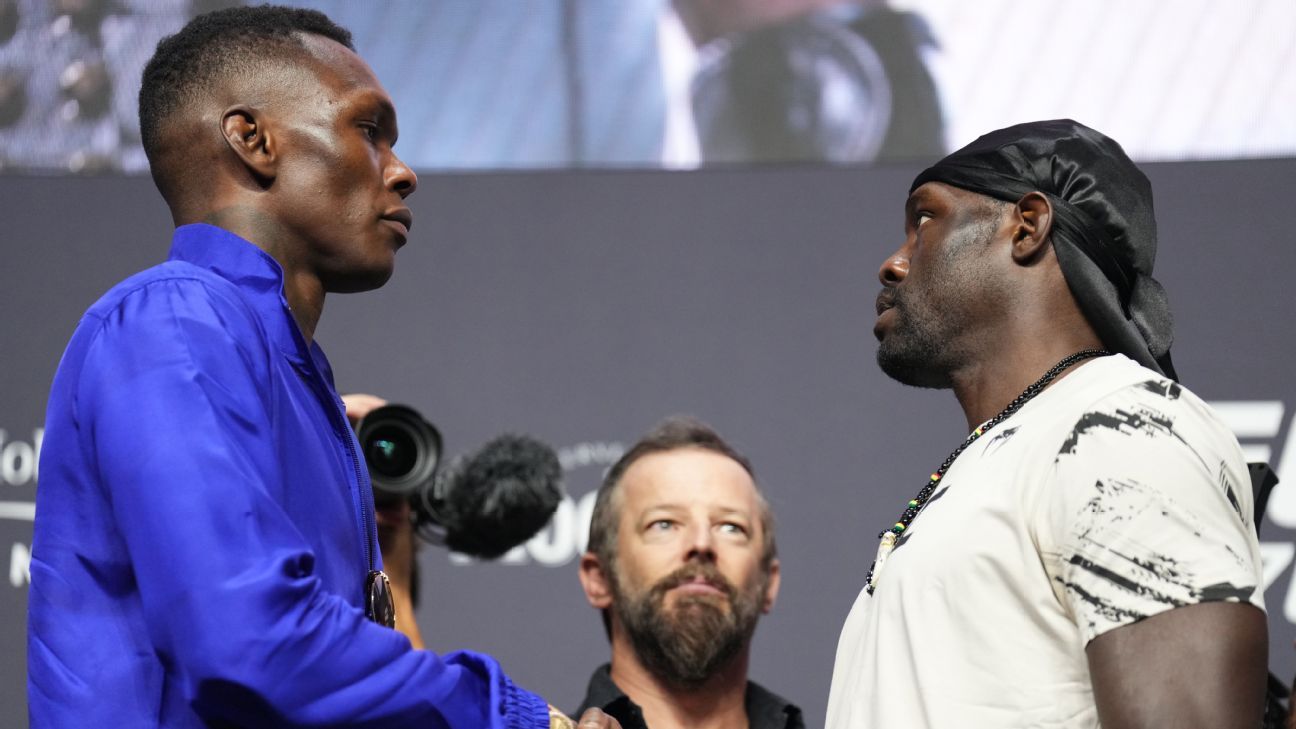 LAS VEGAS — Israel Adesanya had a look into a proverbial crystal ball Thursday at the UFC 276 news conference. Behind him on the dais were Sean Strickland and Alex Pereira, a pair of middleweights on the undercard this weekend.

The winner of that fight will likely be next in line for Adesanya’s middleweight title — and “The Last Stylebender” spent more time going back and forth verbally with Strickland and Pereira than his actual next opponent.

Before Adesanya can open up the door to his next challenge, he has to successfully defend his UFC middleweight title Saturday night against Jared Cannonier in the UFC 276 headliner at T-Mobile Arena. And the hard-hitting Cannonier is not one to look past, even if Adesanya is a -490 favorite, per Caesars.

Adesanya is one of the best fighters in the world. ESPN ranks him No. 3 in the world on its pound-for-pound list. At middleweight, Adesanya is ranked No. 1 and Cannonier is No. 3.

Adesanya (22-1) is undefeated at 185 pounds, a perfect 11-0 in the UFC in that weight class. The Nigerian-born New Zealand resident is coming off a unanimous decision win over rival Robert Whittaker at UFC 271 in February. Adesanya, 32, has four successful middleweight title defenses after unifying the belt with Whittaker in 2019. His lone pro MMA loss was up in weight, for the UFC light heavyweight title against Jan Blachowicz at UFC 259 in March 2021.

Cannonier (15-5) has won two in a row and five of his past six. The Arizona resident is coming off a second-round knockout of Derek Brunson at UFC 271. Cannonier, 38, has finished fights in three different weight divisions: heavyweight, light heavyweight and middleweight. His only middleweight loss came against Whittaker in 2020.

Volkanovski (24-1) has won 11 straight UFC fights and 21 in a row overall. The Australia native has three successful title defenses after winning the belt from Holloway in 2019. Volkanovski, 33, has beaten Holloway twice, the most recent a close, split decision victory at UFC 251 in July 2020.

Holloway (23-6) has won two straight following back-to-back losses to Volkanovski. Holloway, 30, held a version of the UFC featherweight title from 2016 to 2018 with three successful title defenses.

Also on the card, Strickland and Pereira will meet in what is likely a middleweight title eliminator. Strickland is one of the most prolific trash talkers in the division, while Pereira is 2-0 against Adesanya in kickboxing, including a knockout victory. In addition, former UFC welterweight champion Robbie Lawler takes on Bryan Barberena, and top bantamweight prospect Sean O’Malley takes on veteran Pedro Munhoz in O’Malley’s toughest test to date.

Follow along as Brett Okamoto and Marc Raimondi recap the action in Las Vegas or watch the fights live on ESPN+ PPV.