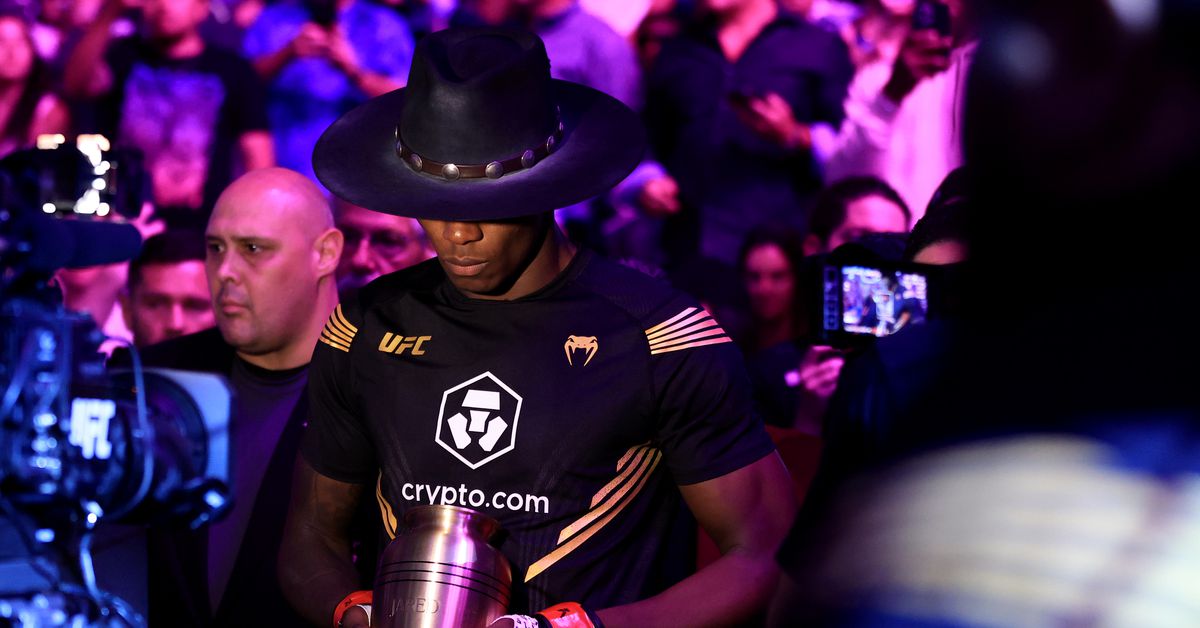 Israel Adesanya had no idea WWE executives Vince McMahon, Stephanie McMahon and Triple H (real name Paul Levesque) would be in attendance at UFC 276 when he decided to mimic one of the most famous entrances in professional wrestling history for his walkout.

When the lights dropped, a loud gong echoed inside the T-Mobile Arena and the music that followed was the theme song for WWE Hall of Famer The Undertaker, with Adesanya following his exact routine, including a dark black hat covering his eyes and even an urn with opponent Jared Cannonier’s name inscribed on the front.

According to Adesanya, the idea for the pro wrestling style walkout came to him during training camp when he was using theme songs from the WWE to help him push through a practice.

“It just works, the theme for me. I’m an artist. It just works,” Adesanya said at the UFC 276 post-fight press conference. “Wednesday night is when we wrestle. Towards the end of the rounds, 12 rounds, towards the end, the last three or four rounds, I’ll chock on my playlist from YouTube, WWE Attitude from the Attitude Era. I have like 20 different tracks from superstars I admire and that would get me in that zone, and the Undertaker’s theme was one of them.

“So as I was sitting down feeling it on Tuesday, it just made sense, and also big shout-out to the UFC production team because they were really accommodating and helpful to make it a show. This is the UFC. You want to give them a show. I said all week this feels like WrestleMania. Who’s undefeated at WrestleMania? The Undertaker, and I’ve been feeling dark all week.”

Adesanya said he worked hand-in-hand with the UFC’s live production team to help him enhance the walkout, which included smoke filling the arena and the signature purple spotlights that always decorated The Undertaker whenever he made his way to the ring in WWE.

Nothing was by mistake, with Adesanya even going as far as attending the production meeting in the arena just so he could see how the entrance would look as he walked out.

“I was very hands on,” Adesanya said. “I felt like I was a producer today when I was at the arena. I was talking [to a producer] and just walked through and I happened to look at the screen, seen what it looked like on TV, seeing what it looked like in the arena and they were so accommodating, which I appreciate that. I like to put on a show and I like to entertain, and I did just that.”

Of course, prior to Adesanya setting foot in the octagon, the WWE had their own “Money in the Bank” pay-per-view just down the street at the MGM Grand Garden Arena in Las Vegas.

Following the conclusion of the event, McMahon and his family — along with popular personality and WWE commentator Pat McAfee — made their way into T-Mobile Arena to catch the final fights at UFC 276.

Adesanya didn’t learn that the team from WWE would be witness to his fight until Saturday morning, but it worked out perfectly that he chose The Undertaker’s theme with McMahon and company in attendance.

“It wasn’t a thing I planned,” Adesanya said. “Like I said, the universe just provides and it’s a weird synergy, a weird crossover, but I like it because I grew up on that s***.