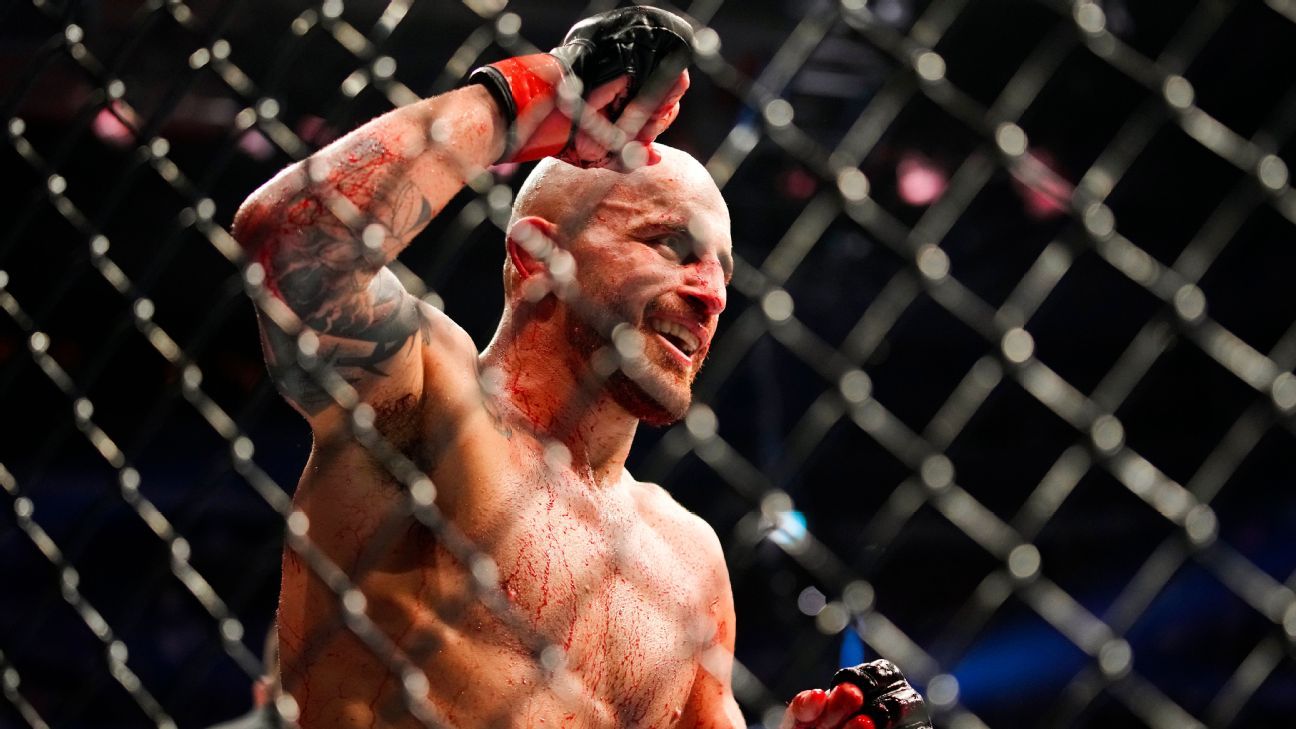 LAS VEGAS — It’s safe to say Alexander Volkanovski has buried his rivalry with Max Holloway for good this time.

Volkanovski (25-1) defended his featherweight championship for the fourth time Saturday night, defeating Holloway (23-7) via unanimous decision in their highly anticipated trilogy bout. All three judges scored the 145-pound title fight, which co-headlined UFC 276 inside T-Mobile Arena, a clean 50-45 sweep for the defending champ.

Saturday’s five-round contest was, by far, the most definitive result of the trilogy. The two first met at UFC 245 in December 2019 and again at UFC 251 in July 2020. Volkanovski won both by decision, but the fights were extremely close — particularly the rematch. Immediately after the rematch, some in the sport still considered Holloway the true featherweight champion, but that sentiment is long, long gone after UFC 276.

“Look, Max Holloway is an absolute beast,” Volkanovski said. “That intensity he brought, that we both had the last few days, I needed it. I really needed it. I had to get him out of here. I knew I’m the best. I needed to remind myself.”

Volkanovski, sporting a wrapping around his left wrist at the postfight news conference, said afterward that he broke his hand in the second round.

Saturday’s fight played out entirely on the feet, with neither featherweight even attempting a takedown until the final round. Holloway, of Waianae, Hawaii, moved forward throughout the bout but struggled to land any consistent offense on the defensively sound Volkanovski. Volkanovski, meanwhile, punished Holloway throughout. He opened a deep cut on Holloway’s left eyebrow in the second round and damaged his nose with shots in the fourth.

According to UFC Stats, Volkanovski outlanded Holloway in total strikes 204-161 — and the difference felt more pronounced than that for those watching the fight. Volkanovski’s defense was simply superb, and he regularly landed heavy counter right hands as Holloway came darting in with punches. It was Holloway, his face a bloody mess, who sought the takedown, unsuccessfully, in the final round.

Volkanovski, of Australia, has emerged as arguably the best pound-for-pound fighter in the world since taking Holloway’s belt in their first fight. He has now defended the title against Holloway twice, as well as against Brian Ortega and Chan Sung Jung. Volkanovski is eyeing a move up to lightweight to challenge for a second belt, a proposal on which UFC president Dana White has already voiced his support.

“I want to be in this Octagon as much as possible,” Volkanovski said. “I want to be busy. I don’t think this division can keep me busy by itself. I want to move up.”

Beyond a potential move to lightweight, Volkanovski’s next featherweight title defense might be linked to a key matchup between Ortega and Yair Rodriguez on July 16.

Volkanovski has now won 22 fights in a row, including 12 in UFC. He is the fourth fighter in UFC history to win his first 12 fights in the promotion, joining Anderson Silva, Kamaru Usman and Khabib Nurmagomedov. He also is the third fighter in UFC history to win three fights against a single opponent, joining Frankie Edgar (over BJ Penn) and Tito Ortiz (over Ken Shamrock).

Holloway sees a two-fight win streak snapped. His only losses at featherweight dating back to 2014 have come against Volkanovski.