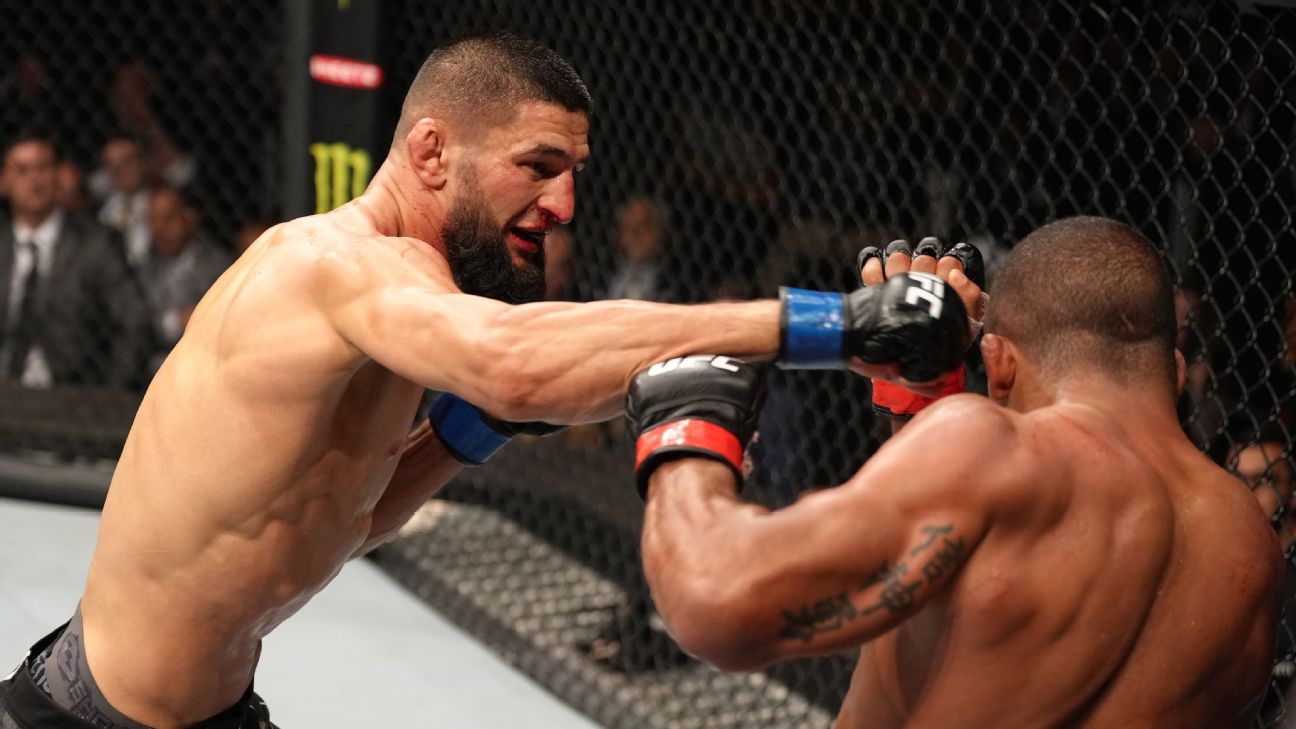 LAS VEGAS — Max Holloway was walking backstage at the UFC Apex last week, just three days before he challenged Alexander Volkanovski in a trilogy bout for the featherweight title at UFC 276.

When pressed with a question, the former featherweight champion — long one of the top fighters on the planet — stopped in his tracks to think. The inquiry: Who will be the best fighter in the world in 2025?

In three years, Holloway figured, he wouldn’t still be competing himself. So, if not “Blessed,” who will be the MMA pound-for-pound king that far in the future? It’s nearly impossible to predict, Holloway said.

ESPN asked more than two dozen athletes and coaches for their prediction on who would be the best MMA fighter in the world in 2025 and there was no clear consensus. The one pattern in their answers: geography.

The majority of responses were fighters from the Caucasus — the Eurasian region between the Black and Caspian seas — and its surrounding areas. The most mentioned names were the likes of Khamzat Chimaev from Chechnya, Russia, now residing in Sweden; Islam Makhachev from Dagestan, Russia; and Shavkat Rakhmonov, born in Uzbekistan and now fighting out of Kazakhstan.

“I would not be surprised if it’s someone from that region of the world that has that strong, heavy wrestling base that allows them to dictate where the fight takes place,” said former UFC double champion and newly inducted UFC Hall of Famer Daniel Cormier, a former pound-for-pound great himself.

Chimaev, 28, is arguably the most promising fighter in the UFC, a surefire future star. He’s 5-0 in the promotion and is coming off a unanimous decision win over Gilbert Burns at UFC 273 in April. ESPN has Chimaev ranked No. 3 in the world at welterweight, and he has also competed successfully at middleweight. He finished his first four fights, with the first three coming in just 66 days, a record for the fastest 3-0 start in modern UFC history.

“I’ve seen and trained with Khamzat,” Xtreme Couture MMA coach Eric Nicksick said. “And I see his work that he puts in and I see the team that he’s around and the people he surrounds himself with and his work ethic. He has that mentality of a guy who you could see being a champion for a long time.”

Makhachev, 30, is the longtime friend and training partner of former pound-for-pound king Khabib Nurmagomedov. He has won 10 straight and is closing in on a lightweight title shot. ESPN has him ranked No. 4 in the world at 155 pounds.

Rakhmonov, 27, might be the best up-and-coming prospect in the world. He has won his first four UFC fights via finish and just took out stalwart Neil Magny via second-round submission. ESPN currently does not have Rakhmonov ranked at welterweight, but that is likely to change.

“I see something in [Rakhmonov] that I saw in [current pound-for-pound king Kamaru] Usman,” said Rakhmonov’s coach, Henri Hooft of Kill Cliff FC. “Not style-wise. But how professional he is, how relaxed he is. It’s scary sometimes to even see how calm he is after the fight — even during the fight.”

American Kickboxing Academy’s Javier Mendez coaches the Nurmagomedovs and Makhachev. And he’s bullish about the 26-year-old Umar being on the top of the mountain in 2025.

“He beats everybody up in the gym,” Mendez said. “Islam [does], too. But Umar is the young [Khabib].”

Outside of the Caucasus region and Eurasia, the one fighter who got the most responses was current UFC middleweight champion Israel Adesanya. He’s been in the UFC for four years and has been a champion since 2019. But the Nigerian-born New Zealander is only 32 years old and hasn’t taken a lot of punishment in fights.

“Not just because he’s so dominant, but the division isn’t super deep,” Fight Ready MMA striking coach Eddie Cha said. “He fights so smart, there’s not much damage. He can fight that style for three more years at a high level with no wear and tear. He knows how to take care of himself.”

Like Adesanya, Sean O’Malley is another striker who hasn’t taken much damage and who several fighters and coaches think could be a future pound-for-pound standout. The bantamweight fighter is still only 27 years old and is already being treated by the UFC and fans as a future crossover star.

“He’s just so f—ing athletic and he’s got this hunger to keep improving, keep getting better,” O’Malley’s head coach Tim Welch said. “He has the athleticism and the work ethic. By 2025, he’ll be in this athletic prime and ready to be the best fighter on the planet.”

When asked who would be the best fighter in the world in 2025, several fighters chose themselves, including UFC welterweight contenders Belal Muhammad and Vicente Luque and featherweight contender Giga Chikadze.

“I can’t wait for 2025, because I believe that’s going to be exactly the year when I’m going to be the pound-for-pound No. 1,” the 33-year-old Chikadze said.

On the women’s side, there was no consensus either. Some of the names frequently mentioned were two-time PFL featherweight champion Kayla Harrison, UFC flyweight champion Valentina Shevchenko and former UFC strawweight champion Zhang Weili. Shevchenko is ESPN’s current No. 1 pound-for-pound female MMA fighter, but many think her dominance will continue.

Other women named by coaches and fighters were potential sleeper picks such as Brazilians Taila Santos and Natalia Silva and Scottish flyweight Casey O’Neill, who is recovering from a torn ACL.

But, like with the men, no one name stood out among the others. Several in the MMA community pointed at the unpredictability of the sport and how much it evolves in a short period. The UFC isn’t even 30 years old yet and three years in mixed martial arts can seem like an eternity regarding the progression in skills and technique.

It’s possible the best fighter in the world in 2025 is someone currently unknown to the mass audience.

“I don’t think we’ve seen him yet,” UFC lightweight Drew Dober said of the best fighter in 2025. “Not in the UFC yet. I think the guys we have currently, they’re showing a lot of growth and fantastic abilities. But that star power? The next Conor McGregor? He’s fighting locally in a regional circuit somewhere. In my humble opinion, someone is going to be lighting it on fire here come soon enough.”