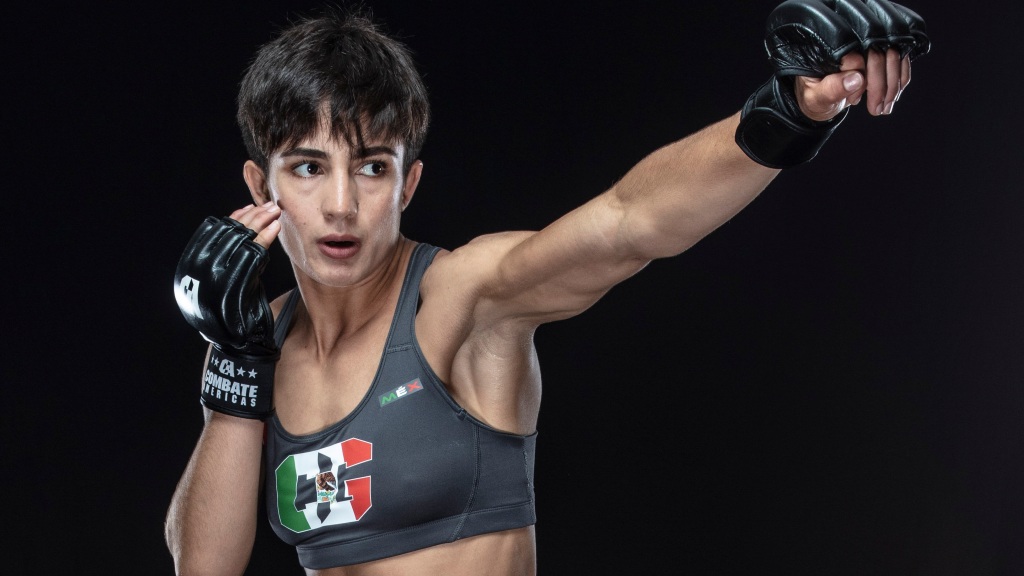 The unbeaten Mexican women’s strawweight prospect already is being projected as a top contender and a future champion by former UFC titleholder Brandon Moreno. Jauregui is one of the biggest personalities and most promising fighters from Entram Gym, Moreno’s former home gym.

Jauregui (8-0) may not be known by the masses in the MMA world just yet, but she promises that will change soon. She’s set to make her UFC debut against Brazil’s Istela Nunes on Aug. 13 at UFC on ESPN 41.

MMA Junkie caught up with the Mexican fighter to get her thoughts on signing with the UFC. You can check out Jauregui’s interview below, as well as a brief scouting report on why Jauregui is one of the most promising Hispanic talents today.

She began fighting professionally at 19 in late 2018 and debuted with a first-round TKO victory in an all-female, regional promotion called Fearless Woman MMA in Mexico. Just a few months later, Jauregui signed with Combate Global, where she spent the majority of her career prior to signing with the UFC.

Under Combate Global, Jauregui fought a total of six times, picking up four knockout victories. Three of those fights were in one night when she won an eight-women tournament for the promotion in August 2021.

Jauregui is a machine at strawweight. She’s a good athlete with reliable cardio, explosiveness and speed. She pairs her physical gifts with classic, aggressive Mexican-style boxing. Jauregui also has good kicks, but her hand speed, knockout power and aggressive boxing stands out the most. Jauregui is a well-rounded product who also is competent in the clinch and grappling departments.

How did you find out you were signed to the UFC?

“I found out like a month ago, more or less. We were figuring out contractual stuff and things worked out very well, and now I’m fighting Aug. 13. It’s a good date for me and my preparation, and I’m extremely happy with the news.”

What are your goals now in the UFC?

“I have many goals, both short and long term. The short-term goal is winning this fight, my debut in the UFC, which is the most important at the moment. The next one is to keep fighting and remain undefeated, God willing. The one after that is to enter the top, that’s another goal. Go and climb the rankings and whatever comes along the way. But the main goal is to take a belt, God willing.”

Brandon Moreno has already put you as a future UFC champion. How does that make you feel?

“I’m in no rush; personally (I) never have (been). It’s been a year since I fought, and I’m taking this first fight (in the UFC) with calmness, and I’m in one of the best moments in my career. Little by little, things will come. Little by little, you earn your spot. I don’t want to rush. I’m very happy and grateful for Brandon and his comments toward my career. He’s been a big part of my process, as well, because he’s a big inspiration for me. He knows what we’re made of, and God willing I’ll take a belt in the future.”