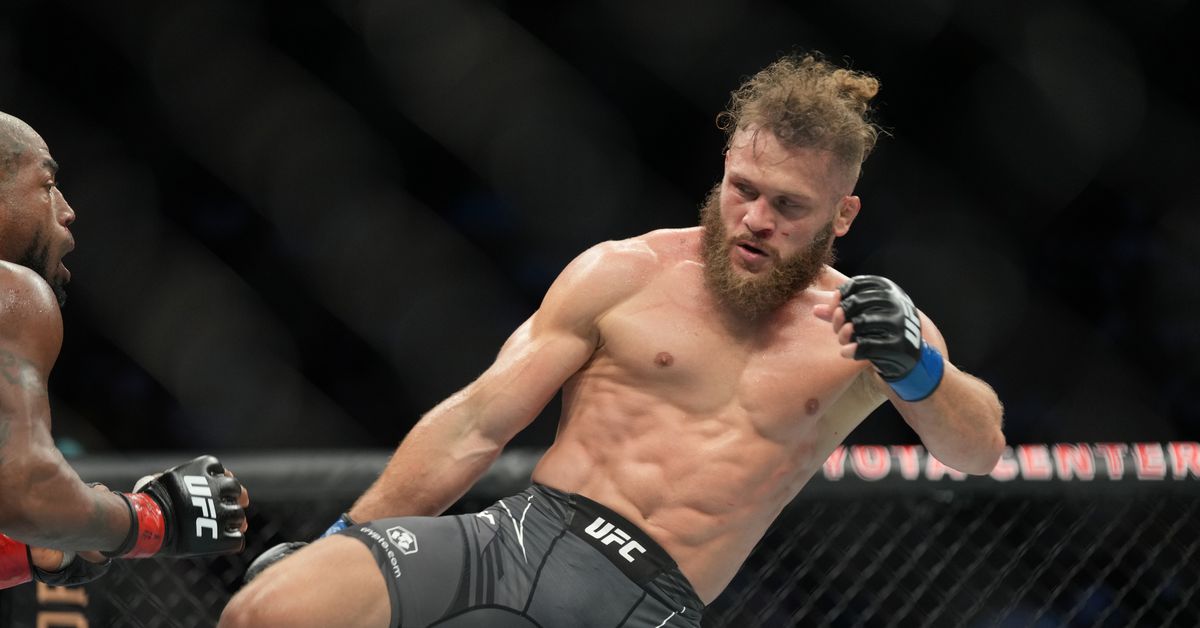 Rafael Fiziev wants to remind Conor McGregor that real life striking is a lot different than the movies.

Ahead of his headlining bout with Rafael dos Anjos on Saturday at UFC Vegas 58, Fiziev found himself in a lively Twitter discussion with “The Notorious” after McGregor commented on a tweet that featured Fiziev in action.

In the clip, Fiziev is shown dodging strikes with his signature lean back, a defensive strategy McGregor said could be countered with a modified axe-kick.

This is awesome. Change the roundhouse to an axe kick. Roundhouse into and axe kick and this defense eats the full of the heel.
I’m telling you. If their reaction to a high kick is this, implement the axe. https://t.co/Nxg0BemzoO

Conor, I invite you to @tigermuaythai where we can show you how to kick and defend the kicks properly so you can stop living in fantasy world where you think it’s possible to land an axe kick in this situation https://t.co/N6BQ89Ssyx

Fiziev responded to McGregor with a quote tweet and later elaborated on the exchange during an appearance on The MMA Hour on Wednesday.

“I don’t feel like it was disrespectful,” Fiziev said. “I also talked to him with respect, I’ve always talked about him with respect. This guy does a lot for MMA, for this industry, and this guy is a big name and I always respect him. But I don’t know why he doesn’t like my lean back.

“He always talks about it. He started talking about it before my fight with Moicano. I respect him and I’m really inviting him to my gym, to Tiger Muay Thai, to show him how to kick, show him good training.”

McGregor continued to tweet at Fiziev, replying to the initial “fantasy world” comment by pointing out that Fiziev’s defense is “penetrable.”

“Fantasy world” is thinking that this major defensive habit you have developed is impenetrable. It is, very much so penetrable. Habits are opportunities to set traps. Good luck.

The two appeared to end their conversation amicably, though McGregor snuck in a jab by writing, “Don’t disrespect you are yet to do anything significant in this sport” while Fiziev added that training at his Tiger Muay Thai gym would be “much better camp than you had in Dubai before.”

Thank you for the offer. When I am in Thailand I will head here for sure! Don’t disrespect you are yet to do anything significant in this sport. Good luck in your upcoming fight.

No disrespect meant either, training together will be beneficial for both of us. Trust me it will be much better camp than you had in Dubai before.

As for McGregor’s specific critique, Fiziev laughed it off and said McGregor is dreaming if he thinks his suggestion has practical value.

“You cannot change if you start the high kick and halfway you’re gonna change to an axe-kick. How do you do that? Bro, this is crazy.”

Fiziev emphasized how much respect he has for McGregor and made it clear his offer to have McGregor train with him is genuine.

“It’s just facts,” he said. “It’s always respect, it’s not disrespect. I always talk with respect. I really like him and I really know this will be a very good experience for him if he comes to Tiger Muay Thai.”

Asked if he might potentially cross paths with McGregor in the cage someday, Fiziev answered that it might only happen if he can’t get past dos Anjos this Saturday. Fiziev has won five straight fights, two of those by spectacular knockout, and a win over a former UFC champion could vault him into title contention.

With a loss, he can see himself being matched up against McGregor, who has just one win since 2016.

“Maybe he sees me an opponent,” Fiziev said. “That’s why he starts talking about my lean back from a long time ago.”

“I think if I win against RDA, this fight doesn’t happen,” he added. “I need to lose to RDA for this fight with McGregor [to happen]. I don’t know.”

No bother pal, sound. Think of me as tiger woods with a 12 iron and your nose as the golf ball. And think of me sprinting for it with a running switch kick and fuck your little bend back. You little bend back nobody bitch. Oh you bend over, wow, that’s awesome. Congrats pal haha