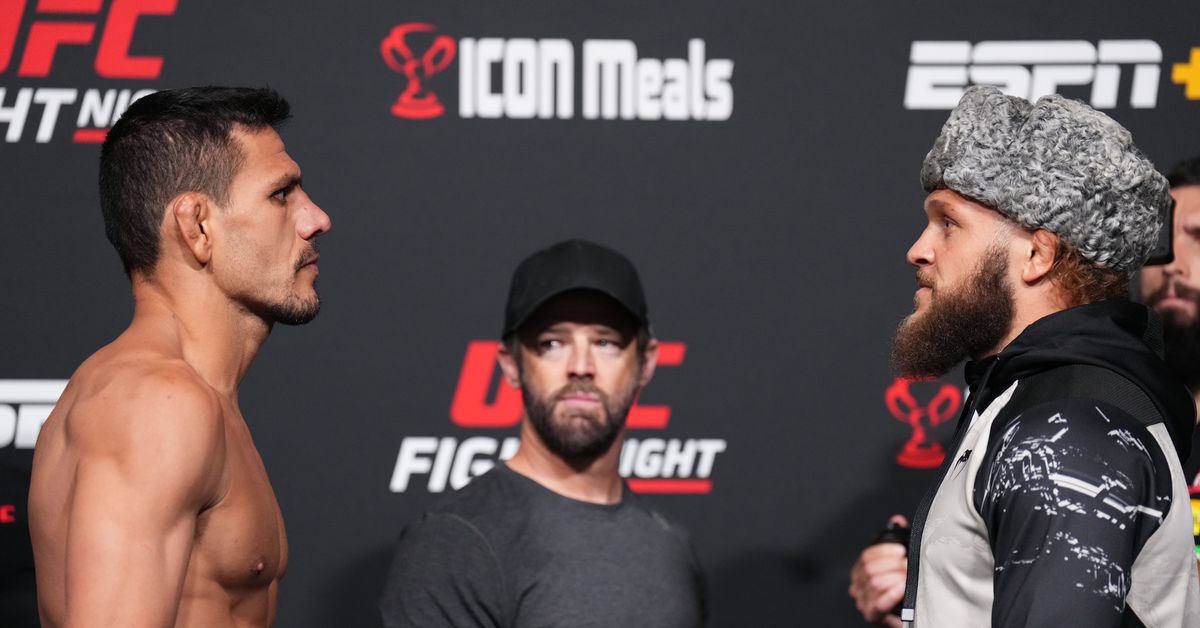 Dos Anjos is a former UFC Lightweight champion who has been with the promotion since the Spike TV era. He’s walked to the Octagon 31 times and holds the record for the most unanimous decision wins in UFC history. He is also tied for sixth most total wins in promotional history. He’s 3-3 in his last six fights with wins coming over Kevin Lee, Paul Felder and Renato Moicano. His last four losses are to Michael Chiesa and Welterweight elites Colby Covington, Leon Edwards and Kamaru Usman.

Fiziev, meanwhile, is a relative newcomer to UFC (and MMA). He joined UFC in 2019 off the back of a storied kickboxing career. The Tiger Muay Thai product dropped his UFC debut, losing via technical knockout to Magomed Mustafaev, but he has won five fights since then. His most recent victory was a “Performance of the Night”-winning effort over Brad Riddell in Dec. 2021.

Record: 31-13
Key Wins: Paul Felder (UFC Vegas 14), Robbie Lawler (UFC on FOX 26), Neil Magny (UFC 215), Donald Cerrone (UFC on FOX 17, UFC Fight Night 27), Anthony Pettis (UFC 185), Nate Diaz (UFC on FOX 13), Benson Henderson (UFC Fight Night 49).
Key Losses: Michael Chiesa (UFC Fight Night 166), Leon Edwards (UFC on ESPN 4), Kamaru Usman (TUF 28 Finale), Colby Covington (UFC 225), Tony Ferguson (TUF LA3 Finale), Eddie Alvarez (UFC Fight Night 90), Khabib Nurmagomedov (UFC on FOX 11).
Keys to Victory: The biggest advantage dos Anjos has over Fiziev is his grappling. “RDA” is a fourth-degree black belt in Brazilian jiu-jitsu. He’s not always shown this in the Octagon, though. His talent, and perhaps over confidence on the feet, has seen him get pieced up in the past, but when he does decide to commit to his ground game he can be an absolute terror.

The elite wrestlers he’s faced have been able to nullify this threat (by taking advantage of his less than stellar takedowns), but Fiziev is not that. Fiziev has never come close to a grappler of dos Anjos’ caliber. If dos Anjos can get the fight to the ground, it seems highly likely that he will be able to set up and finish a submission on his striking-dominant opponent.

For this plan to work, though, dos Anjos needs to recognize the threat Fiziev poses in the stand up game. We’ve seen RDA get roughed up on the feet early and then gut it out to lose a unanimous decision before. He simply can’t afford to do that here. If he believes he can overwhelm Fiziev with strikes and is hoping to show that, then it could be a painful night for the Brazilian. However, if he’s smart and focuses on evading Fiziev’s power early and then testing him on the ground, dos Anjos should prove to be the victor.

Record: 11-1
Key Wins: Brad Riddell (UFC Vegas 44), Bobby Green (UFC 265), Renato Moicano (UFC 256), Marc Diakiese (UFC Fight Island 2).
Key Losses: Magomed Mustafaev (UFC Fight Night 149).
Keys to Victory: Fiziev has to hurt dos Anjos early and often to earn his best chance for the win here. And he’s no slouch at getting out of fights early. More than half of his professional fights have come by first round stoppage.

If Fiziev can’t finish dos Anjos in the first few rounds he’ll have to wade into uncharted territory. His first UFC main event is also the first time he has the potential of going five rounds. He’s only ever gone to a three round decision twice in his career. None of his professional kickboxing bouts logged more than three rounds, either.

We haven’t seen enough evidence to suggest Fiziev is going to gas when coming into a potential fourth round. But, his chance of failure in the latter stages of the fight are greatly affected by who he’s facing: a grizzled veteran who has gone five rounds — against stiff UFC opposition — eight times. Indeed, RDA has a total fight time in UFC of seven hours and 33 minutes (second all-time behind Frankie Edgar). Dos Anjos may be on the wrong side of 35, but there doesn’t seem to be any signs that his conditioning has plummeted — he looked great over five rounds last time out versus Renato Moicano.

So, it would probably favor Fiziev if he held off experiencing 25 grueling minutes of combat until he is facing someone who is not an expert in that department.

Another key to victory for “Ataman” would be to keep the fight standing. Fiziev is a dynamic and creative striker with elusive footwork and Matrix-style head movement. You’d favor him in any fight in this division if the opponent decided to stand and bang for as long as they could take it. If dos Anjos doesn’t opt for that it will be up to Fiziev to keep the fight on the feet, where he has the best chance of winning.

This fight represents a crossroads for both men.

The 37-year-old dos Anjos has won two straight since returning to 155 pounds, but he’s lost a lot in the past four years. This fight feels a try-out for UFC’s gatekeeper class. A loss to Fiziev will surely regulate him to being a testing ground for the long line of Lightweight up-and-comers. If he wins, he staves off that possibility, and might continue to score main events and the chance to build up to another title run.

For Fiziev, this could be his big break in MMA. He’s impressed so far in his UFC career and put together quite the highlight reel, but he doesn’t have a big name on his record. And he needs one. He’s already 29 and must sense that he has to make things happen quickly if he stands a chance at making a tangible impact on the stacked Lightweight division. If he loses, maybe he’s just a fun fighter who we’ll see in wars opening pay-per-view (PPV) events. But, if he wins, he’ll leapfrog dos Anjos in the rankings into at least the seventh spot. If that happens, the only men ahead of him will be title challengers.

At UFC Vegas 58 it’s a battle of the Rafael’s with flashy newcomer taking on a battle-tested Octagon veteran. Will it be dos Anjos or Fiziev who comes out of this one with his hand raised?

Remember that MMAmania.com will deliver LIVE round-by-round, blow-by-blow coverage of the entire UFC Vegas 58 fight card right here, starting with the ESPN/ESPN+ “Prelims” matches, which are scheduled to begin at 6 p.m. ET, then the remaining main card balance (on ESPN/ESPN+) at 9 p.m. ET.

To check out the latest and greatest UFC Vegas 58: “dos Anjos vs. Fiziev” news and notes be sure to hit up our comprehensive event archive right here.