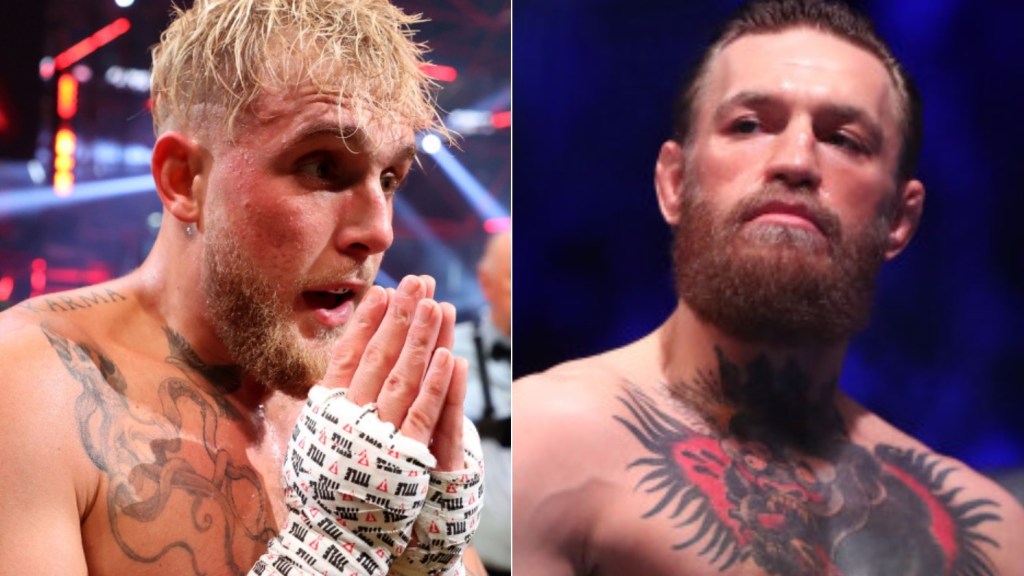 Fight fans probably shouldn’t get their hopes up for an actual matchup, but Jake Paul and Conor McGregor continue to take aim at each other.

After Paul’s Monday appearance on “The MMA Hour”, in which he said a fight between the two probably would result in a $75 million to $100 million payout per man, McGregor hopped on Twitter and called Paul a “flop” and a “nobody.”

Paul’s response to that Tuesday was a little more vitriolic – and came with some pretty hefty accusations, including one that McGregor takes the steroid Trenbolone and another that he is unfaithful to his wife.

“Conor, Conor, Conor – you’re more active on Twitter than you are in the octagon,” Paul said in a video posted to his Instagram account. “Stop taking Trenbolone and start taking fights. You’re more actively cheating on your wife than you are in the octagon. Your priorities are mixed up. Put down the bottle and get back to fighting. You haven’t won a fight in five f*cking years, and the last time you did was against (Donald) ‘Cowboy’ Cerrone – who hasn’t won a fight against anyone since fighting you.

“I’m a ‘nobody,’ you say in this tweet. Well, yeah, you’re right. I’m just a f*cking kid from Ohio – I really am a nobody. But this is where you fought your sixth fight: There’s literally two people in the crowd. And this is where I’m going to be fighting my sixth fight: Madison Square Garden, the mecca of boxing, Aug. 6. I know you’ll be watching, kiddo.”

Paul then compared dollar figures and said McGregor made $150,000 in his 18th pro fight, which was a win over Dustin Poirier at UFC 178. By contrast, Paul said he made $15 million for his fifth pro boxing match. It should be noted McGregor’s $150,000 was just the payout disclosed by the UFC – he made $75,000 to show and $75,000 as a win bonus. He also made $50,000 for a Performance of the Night bonus and made have gotten other discretionary non-disclosed “locker room” bonuses.

But then Paul doubled down on his claim earlier in the video that McGregor isn’t faithful to his wife, Dee Devlin, and showed a clip of a video he said McGregor’s public relations team is trying to keep from getting out.

The authenticity of the video appears to be questionable, at best.

“You have a lot to say about me, but I’m sharing millions of dollars with underpaid fighters while you’re sharing hookers with Dana White,” Paul said. “Ooops – I’m sorry, Conor. I know your PR team is trying to hide that video. You shouldn’t have f*cked with me, Conor. This is my game. There’s a new king in town. I’m running sh*t now.

“Fix your calcium deficiency, stop breaking your bones, and let’s get in the ring and make $200 million. Conor, no matter how you slice it, we’re just not on the same level. I’m my own boss. Yeah, you made $100 million when you fought Floyd (Mayweather), but Dana took half of it. So no matter what you do or what you make, cut that sh*t in half.

“If we went net worth for net worth, I would sh*t on you, Conor. Put the bottle down, get off of Twitter, get back in the ring and shut the f*ck up or I’m going to put you back on a leash. F*ck you, Conor.”

‘One of the best fighters ever’: Twitter reacts to Rory MacDonald’s retirement announcement
Morning Report: Khamzat Chimaev unsure of title shot if he and Kamaru Usman win next fights: ‘The guy’s scared of me’
UFC 278 Embedded, Episode 3: ‘I’m looking forward to going out there and shocking the world’
Yazmin Jauregui reveals what Dana White told her after stellar UFC San Diego debut
Jamahal Hill Calls For Title Fight Next: ‘I Want The Shot At Jiri’ | UFC on ESPN 40