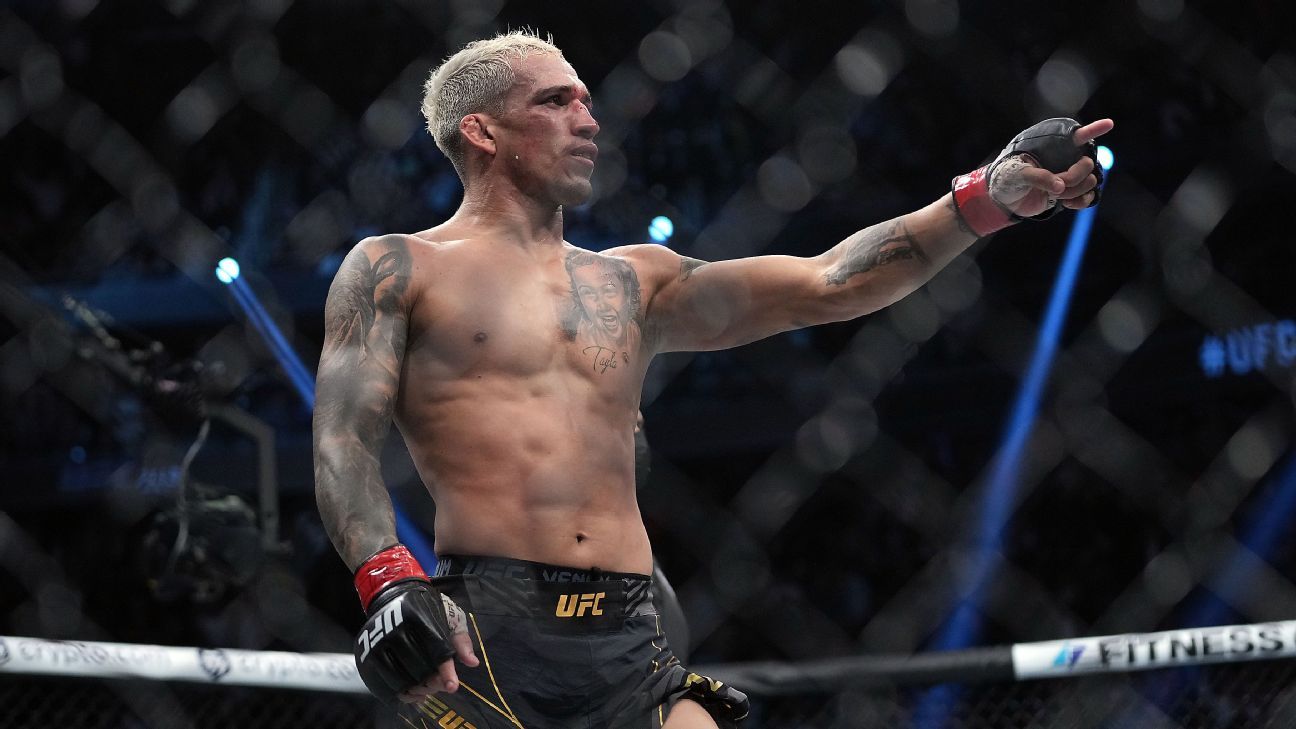 Any mixed martial arts fan will tell you that one of the best things about following this sport is the never ending string of storylines to follow. There is no off-season, and there is always something going on inside and outside the Octagon, and things can change instantly. Never a dull moment, as they say.

So far in 2022, the top story revolves around UFC lightweight “champion” Charles Oliveira. The Brazilian was sensational in his only appearance this year, a first-round submission over Justin Gaethje in May. Yet, he lost his title due to missing weight before that fight at UFC 274. What happens next with Oliveira is the No. 1 thing to watch for the rest of the year. He’s not the official champion, but he’s undoubtedly viewed as the champ. It’s a fascinating situation for a man who sees himself (and expects to be paid) as one of the top draws in the sport. And he’s been calling out Conor McGregor.

Beyond Oliveira, other 2022 first-half storylines include Jorge Masvidal falling to 0-3 in his last three fights and then allegedly sucker-punching Colby Covington on a Miami sidewalk. How that incident impacts both of them moving forward is still to be seen. We’ve also been waiting for news on Nate Diaz‘s UFC return, in what is the final fight on his UFC contract. We’ve seen some emerging star power in a London event (Tom Aspinall, Paddy Pimblett, Molly McCann, Valentina Shevchenko) finally challenged at flyweight, dominance from champs like Israel Adesanya and Alexander Volkanovski, and several new champions crowned.

There’s still a lot to look forward to in the year’s second half. In the meantime, here are ESPN’s midyear MMA Awards.

Okamoto: Remarkable things are happening at featherweight and lightweight right now. Volkanovski has cemented himself as one of, if not the best pound-for-pound fighter in the world. His five-round dismantling of an all-time great in Max Holloway in July was a career-defining moment. Volkanovski is firing on all cylinders and will be a tough man to dethrone.

The same can be said about Oliveira, whose stock rose in May when he defeated Gaethje, even if he officially lost his title. He appears to be headed for a matchup against Khabib Nurmagomedov protogé Islam Makhachev. Beyond that, there’s also McGregor and — quite possibly — Volkanovski. It should be no surprise that there is a lot of interest in seeing the top two fighters of the first half square off in late 2022 or 2023.

Wagenheim: The 2022 sample is small — Zhang has fought just once this year, for less than three minutes — but it was spectacular. Her first-round knockout of Joanna Jedrzejczyk at UFC 275 last month was a stunner, particularly the spinning-back fist that closed the show. The shot sent Jedrzejczyk into retirement and propelled Zhang to the front of the line in a strawweight contender scrum that not long ago had looked entirely different for the 32-year-old former champ (and her opponent, for that matter).

Zhang and Jedrzejcyk both have two losses to Rose Namajunas, who was the reigning champion at the time when this fight was booked. So the stakes seemed murky for a pair of 0-2 women in limbo. But, a month before their fight, Namajunas was dethroned by Carla Esparza, which upped the ante for both fighters. Zhang capitalized and is now in a position to reclaim the strawweight title.

Raimondi: Maybe the secret to Holland’s success is only fighting in even-numbered years. The Texan went 5-0 in 2020, the most wins for a middleweight in a calendar year in UFC history. Last year, Holland was winless in three fights. However, things flipped for him in 2022, as moving down to welterweight has netted two wins thus far, both by finish. The difference? It seems like he’s patched up his biggest weakness: wrestling.

Outside the Octagon, Holland is like a modern-day superhero. Earlier this year, he helped subdue a gunman in a Texas sushi restaurant and saved a driver from an overturned tractor-trailer. They’ll make a movie about his all-around exploits if Holland keeps this up.

Raimondi: It’s difficult to have a better first two fights in the UFC than Della Maddalena. The Western Australian-born fighter debuted at UFC 270 in January with a first-round knockout of Pete Rodriguez via a beautiful counter left hand. At UFC 275, he returned with another first-round finish. After scrambling to his feet following Ramazan Emeev‘s takedown attempts, Della Maddalena boxed Emeev up and stopped him with a gorgeous left to the liver.

For those counting at home, that’s 2-0 in the UFC in five months with a pair of highlight-reel finishes. Della Maddalena’s team is very high on him, and it’s clear to see why after he earned his way into the UFC from Dana White’s Contender Series last year. The Aussie has some serious hands and looks like he could box with anybody in a tough welterweight division. It’s easy to get excited about what could be next for him.

Wagenheim: Some submissions make you go “Wow!” The reflexive response to this one was “What?” How was it possible that a standup wildman with 25 knockouts among his 29 victories would tap out a Brazilian jiu-jitsu black belt who had not been submitted in 40 professional fights. With all due respect, Teixeira had been in bouts with much better grapplers than Prochazka and had never tapped out. Yet that is precisely how the 29-year-old took the light heavyweight title from Teixeira.

The rear-naked choke happened in the final minute of Round 5, a circumstance that always shines a brighter light on a finish, especially when the fighter suddenly tapping had been looking like the fresher man. It was not so much the artistry of this submission as the preposterousness of the final execution.

Okamoto: Chandler’s front kick knockout of Tony Ferguson will be a tough highlight to beat for 2022’s Knockout of the Year. It was sudden, unexpected and the definition of devastating. And to make it even wilder, Chandler later revealed he doesn’t even practice front kicks.

If there was any downside to this KO, it came against a fan favorite in Ferguson, who looked like his old self in the fight before Chandler put him away. On the other hand, the fact it came against Ferguson makes it even more impressive. No one puts out Ferguson’s lights, let alone like that. Chandler’s finish was one of the most impressive MMA highlights of the last several years.

Raimondi: Easy choice. This fight is not only the best in 2022, it’s one of the greatest fights in UFC history — perhaps the best title fight ever. This bout had everything you want in a high-level MMA fight. There were hard shots on the feet and exciting grappling exchanges on the mat as both men dug deep to make it into the fifth and final round, where Prochazka ultimately submitted Teixeira. Remember that Teixeira, the submission specialist among the two, had never tapped in his 20-year MMA career.

If there was one knock on the UFC 275 main event, it would be that both men made costly errors that changed the course of the fight on several occasions, including Teixeira going for an ill-advised guillotine choke in that fifth round. But that didn’t take away from the excitement of the battle. Instead, it increased it, highlighting how desperate both men were to finish and win while exhausted.

Wagenheim: There were no title fights on this card, not even a No. 1 contender eliminator. But, in the main event, a contender announced his arrival among the heavyweight elite when Aspinall, born in Manchester, England, and fighting out of Liverpool, sent the crowd home with a first-round armbar of Volkov. It was the main card’s third straight first-round finish, all authored by Englishmen. There were four more in the prelims.

And that was just stuff that happened inside the Octagon. Add Molly McCann giving fight fans and soccer legend Wayne Rooney the total “Meatball” experience and Paddy Pimblett leaving the cage to celebrate with Dana White. The O2 Arena was on edge the entire night.

The drama show in London was full tilt that night: The cageside judges were shaky, fighters were finishing fights quickly and the party was raucous all evening. The UFC will be back in London on Jul. 23, and fight fans would be well served to mark their calendars and get ready for another party in The O2.

Raimondi: Chandler’s postfight interview with Joe Rogan after he knocked out Tony Ferguson at UFC 274 was everything you want when you put a microphone in front of an athlete’s face. Chandler made jokes, complimented Ferguson and then was clear and charismatic about who he wanted next — the winner of that night’s main event between Oliveira and Justin Gaethje. And if those two weren’t up for a rematch with Chandler, then he had another idea: How about Conor McGregor? Chandler said he’d even do it up in weight at 170 pounds.

The crowd was hanging on every one of Chandler’s words, and when he mentioned Oliveira, Gaethje and McGregor, the fans in Phoenix popped. Chandler capped the interview with his catchphrase: “See you at the top.” That’s the stuff that would make even pro wrestling’s most iconic promo artists — like Ric Flair, “Stone Cold” Steve Austin and The Rock — give a chef’s kiss.