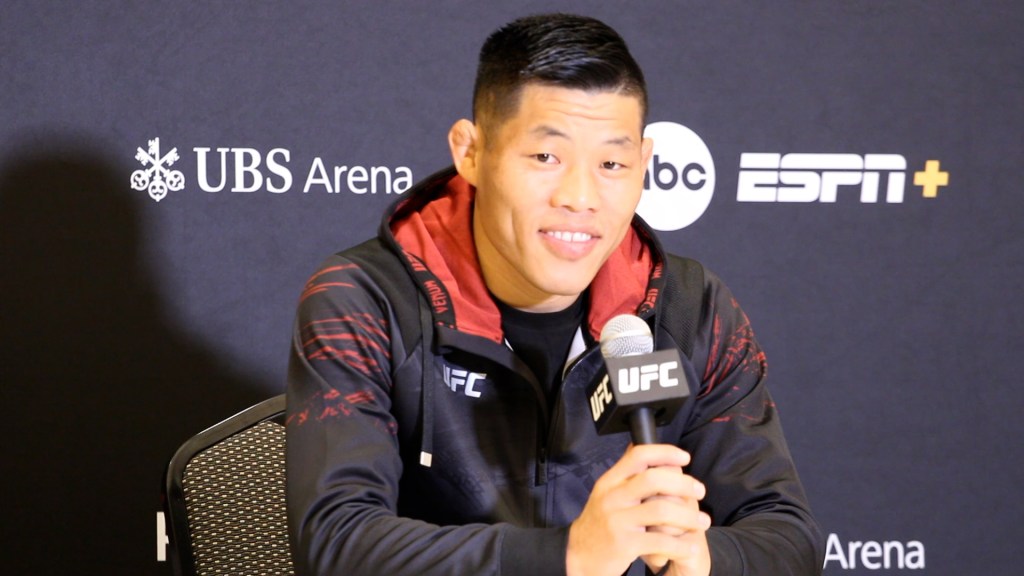 UNIONDALE, N.Y. – Li Jingliang suffered the same fate to Khamzat Chimaev as most opponents have, and he’s ready to rebound.

After scoring a signature knockout of Santiago Ponzinibbio in January 2021, Jingliang (18-7 MMA, 10-5 UFC) was quickly submitted by unbeaten star Chimaev (11-0 MMA, 5-0 UFC) last October at UFC 267, where he wasn’t given much of an opportunity to get going.

Looking to get back in the win column, Jingliang meets Muslim Salikhov (18-2 MMA, 5-1 UFC) on Saturday’s UFC on ABC 3 main card, which takes place at UBS Arena in Elmont, N.Y. The main card airs on ABC and streams on ESPN+ following prelims on ESPN/ESPN+.

“I think I gained a lot from that loss,” Jingliang told MMA Junkie and other reporters during UFC on ABC 3 media day on Wednesday. “I think I learned a lot. The experience of fighting from the Khamzat fight, I think I can learn more from my loss than the wins. So I lost five times in my UFC career. I think I learned more from those losses than from my victories in the UFC.”

He continued, “After the Khamzat fight, I spent more time with my family because I’m a dad of two lovely kids. So I spent more time with family and after the Chinese New Year, I came to the U.S. in April with my team and just focused on the training camp. I hope I can have two more fights this year to give more to my fans.”

After running through Jingliang, Chimaev outlasted former title challenger Gilbert Burns at UFC 273, where he absorbed more strikes in that fight than his entire career combined.

Jingliang still rates Chimaev’s skills highly but thinks he has a bit more to prove before he’s championship ready.

“I acknowledge that he’s a very, very high-level fighter,” Jingliang said. “But if he’s as good as a champion, I think he still needs maybe one or two more fights to prove his championship level.”

He continued, “He’s a very smart fighter actually, and he has a very good game plan, so that is what we need to learn from him.”

‘One of the best fighters ever’: Twitter reacts to Rory MacDonald’s retirement announcement
Commission: Nam should move up after UFC win
UFC 278 Clash: Pedro Vs. Hunsucker!
Cruz Explains What Will Make The Difference In Yan/O’Malley
Vera KOs Cruz in 4th round at UFC San Diego