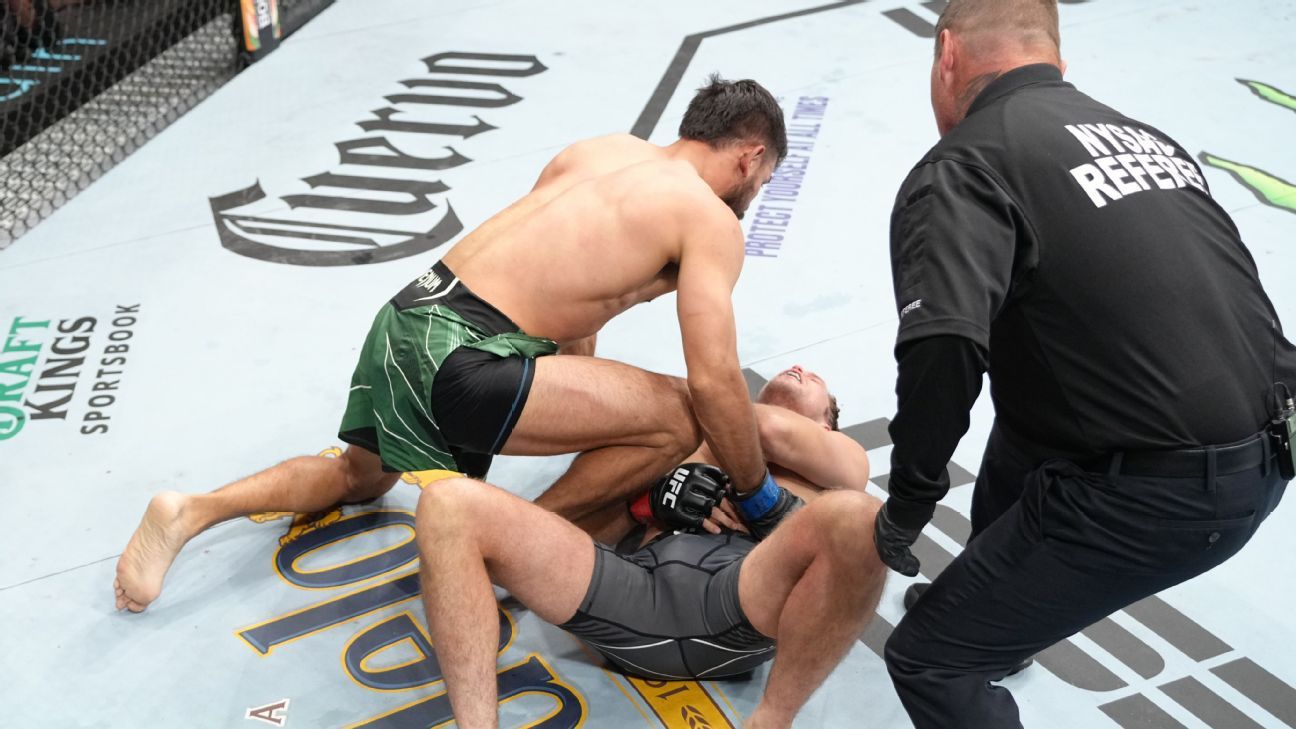 What were the biggest moments at UFC Fight Night in Long Island? Marc Raimondi and Jeff Wagenheim offer up their takeaways from a fun-filled event in Elmont, New York.

There is plenty to unpack from a disappointing UFC Long Island main event. How does Yair Rodriguez‘s victory following a Brian Ortega injury affect the UFC featherweight title picture? We’ll get to that. But first, it’s important to state that Rodriguez should be given credit for this as a real win. Yes, Ortega’s shoulder popped out, leading to the TKO finish. And sure, in typical cases that kind of thing does not usually happen; Rodriguez was not attempting to pop Ortega’s shoulder out with a particular technique.

However, Rodriguez was attempting an armbar from the bottom position and Ortega injured his shoulder while trying to defend said submission attempt. That’s a legitimate victory. Ortega didn’t slip and injure it, and he didn’t step the wrong way and hurt his ankle and knee. The injury was sustained while battling for position with Rodriguez on the ground. So, while Rodriguez was not attacking the shoulder with a submission or a strike specifically, the shoulder was damaged during an actual offensive move by Rodriguez and a defensive move by Ortega.

This result absolutely alters how the UFC plans out out the top of the featherweight division. Rodriguez was likely to get a title shot against Alexander Volkanovski with a win. He did win and it was a real victory, but it wasn’t the kind of victory that usually leads to title shots. While the UFC could certainly do Volkanovski vs. Rodriguez — and it would be an absolute banger of a fight that few would complain about — it now seems more likely that we could be looking at Rodriguez against Josh Emmett in a No. 1 contender fight.

Meanwhile, Volkanovski fought just two weeks ago against Max Holloway and needs surgery to repair a thumb injury. UFC president Dana White said in the postfight news conference Saturday that the UFC is considering an interim title, which seems like a disservice to Volkanovski considering how active he has been as champion. If the interim title comes to fruition, then Rodriguez vs. Emmett would make the most sense. Rodriguez was cut under his left eye Saturday night, but that will heal quickly. Emmett took more damage in a win over Calvin Kattar on June 18, though those were also mainly superficial cuts and bruises.

Volkanovski has also talked about moving up to lightweight and challenging for that title. One would have to imagine that has to be put on the back burner now due to the thumb injury and the booking of Charles Oliveira vs. Islam Makhachev for the vacant lightweight title at UFC 280 in October. It seems realistic that there could be an interim featherweight title fight between Rodriguez and Emmett before the end of the year, with Volkanovski fighting the winner early in 2023 to unify the belts.

Potentially, former flyweight and bantamweight champion Henry Cejudo, who is coming out of retirement, could be in the mix, too. But it appears the UFC would prefer Cejudo at bantamweight, not featherweight, upon his return.

Hopefully, Ortega can make a full recovery as soon as possible, because he did deserve better Saturday night. No one knows what would have happened if the fight had continued. Ortega is one of the most resilient fighters in the UFC, and the contest was a total tossup before it ended abruptly. If there is any way to do Rodriguez vs. Ortega 2 down the road, the UFC has to make it happen. And if it does, let’s hope that matchup makes more sense geographically. Rodriguez is Mexican and Ortega is a first-generation Mexican American. Long Island made no sense for that bout, when it very well could have happened somewhere in Southern California or the Southwest in front of thousands of avid fans. — Marc Raimondi

Many MMA fans crave nothing more than big knockouts, while others favor slick submissions. I’m all about perseverance through dire circumstances in a fight, and we saw two heart-thumping examples of it on Saturday. 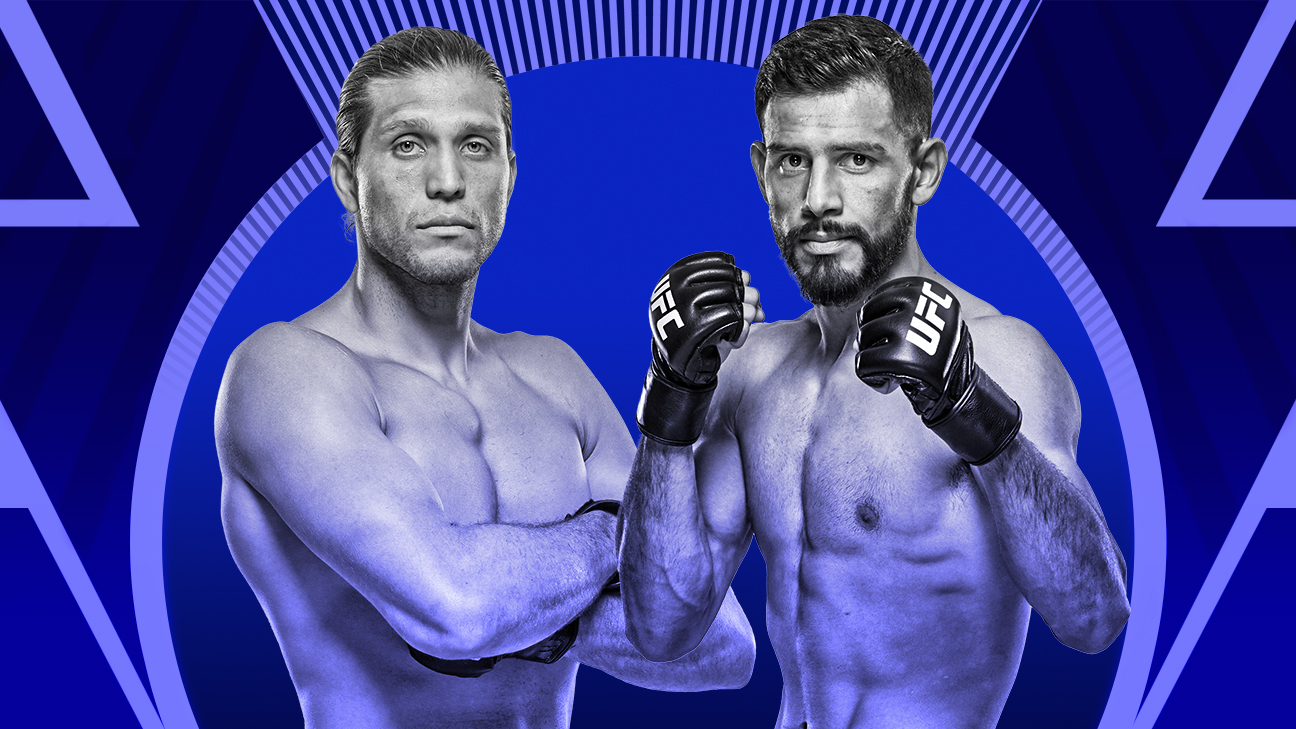 All fights from UFC Fight Night: Ortega vs. Rodriguez will be available to watch on ESPN+.

The first was Bill Algeo‘s survival in the danger zone of Herbert Burns‘ submission game. Burns came into the featherweight prelim with eight submissions among his 11 victories and a decorated background as a gold medalist in multiple no-gi jiu-jitsu competitions. He wasted no time putting Algeo in massive trouble, taking the fight to the canvas early in Round 1 and sinking in a triangle choke. But Algeo, a black belt himself, did not panic. He slowly worked his way out of the submission try, and after fending off an armbar and a leg attack, he got the fight back to standing.

Now the fight was in Algeo’s world. He unloaded on Burns to such an extent that when the fight went back to the mat, Algeo was threatening — with ground-and-pound. When Algeo opted to back off and let Burns stand, it took the sagging Brazilian a while to climb to his feet. The fight could have ended between rounds, as Burns had no energy on his stool. But it was just a matter of time. For nearly two minutes in the second round, Algeo continued the beatdown, in the standup and on the canvas. When Algeo again backed off to allow Burns to stand, Burns barely moved. The referee waved off the fight at 1:50, giving Algeo the victory in a battle that tested his will in the face of scary adversity.

Yet, even more adversity was soon to come. Matt Schnell was staggered several times but finished early in the second round of his flyweight fight with Sumudaerji. Had the referee jumped in at any of these moments, with Schnell on sea legs, few fans would have complained. But they would have been deprived of an unthinkable comeback. Schnell turned the tide by landing a desperate right hand that briefly staggered his opponent, leaving an opening to take the fight to the canvas, where Schnell unloaded elbows and punches. As this was happening, the Long Island crowd was roaring, but it was the fans watching at home who got the added treat of hearing commentator Daniel Cormier‘s voice go high-pitched and barely audible as he tried to capture the stunning moment.

A few minutes later, after Schnell finished the job with a triangle choke in the final seconds of Round 2, Cormier was inside the cage, asking Schnell to explain how he’d done the job. “I think he got tired from beating on me,” Schnell said.

What a sport this is. — Jeff Wagenheim

Miesha Tate deserves one more try at flyweight, even as a gatekeeper

It made sense when Tate announced she’d be moving down to flyweight from the bantamweight division, as Tate looked tiny against Ketlen Vieira in a loss last November. After five years away from MMA competition, things have certainly changed in the landscape, and Tate was logical in trying to make that adjustment. The problem is that in Tate’s debut at 125 pounds, the UFC gave her Lauren Murphy, herself a former bantamweight and arguably the physically strongest fighter in the division, save for champion Valentina Shevchenko.

That is not a criticism of matchmaking at all, by the way. The UFC was setting up a potential title shot for Tate if she beat Murphy, who was coming off a championship challenge against Shevchenko. But it didn’t work out for Tate. Murphy defeated her via unanimous decision and damaged her severely, blasting Tate with elbows and punches that put a hematoma under Tate’s left eye. Hopefully, the injury is not too severe.

Tate is 36 years old and now 1-2 since she returned from retirement. But if she doesn’t want to hang up the gloves, there are still fights for her at 125 pounds. She is a former UFC women’s bantamweight champion, a women’s MMA pioneer and one of the most popular female fighters ever. She does deserve another chance to prove herself at flyweight, to see what went wrong here and make adjustments. The first fight at a new weight class can present a unique set of challenges, from the weight cut to cardio to the speed and power of new opposition.

The only issue is that this loss might position Tate as a gatekeeper, meaning her next opponent might be an up-and-coming fighter, like a Maycee Barber, Tracy Cortez or Amanda Ribas. An exciting matchup would be Tate and Natalia Silva, who looked fantastic in her UFC debut last month. If Tate has no issue with that type of matchmaking and wants another go at 125 pounds, these are the kinds of opponents who make sense. And Tate is still a big enough name that she’s only a win or two away from a top contender bout or title shot. — Marc Raimondi