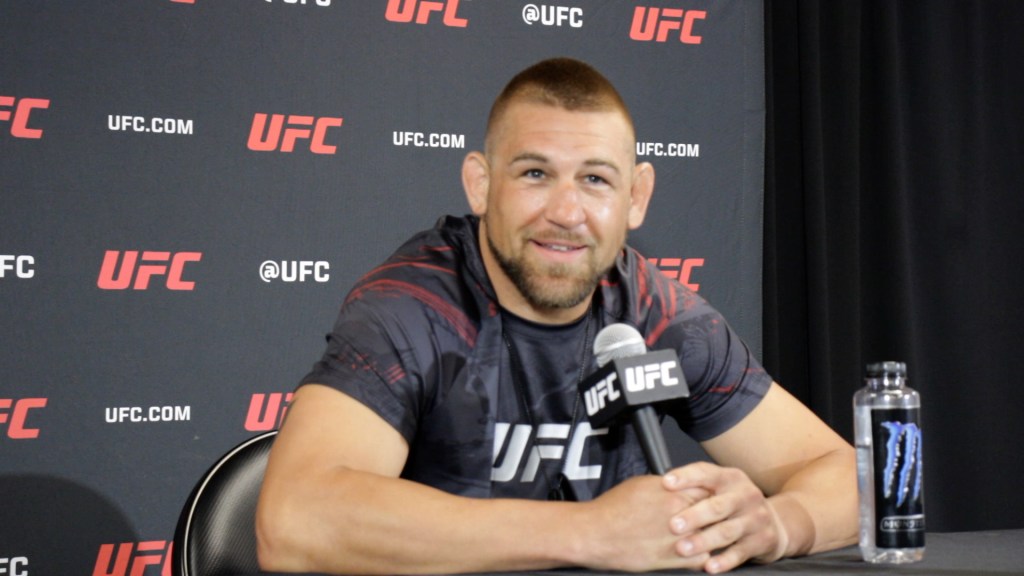 ELMONT, N.Y. – Dustin Jacoby has had plenty of fights between MMA and kickboxing, so when he had some nerves ahead of his UFC on ABC 3 bout, it may have seemed strange.

With an eight-fight unbeaten streak since his return to MMA after a kickboxing foray, including a 5-0-1 run in the UFC, he got a step up in competition Saturday. Jacoby (18-5-1 MMA, 6-2-1 UFC) rose to the occasion with a first-round one-punch knockout of Da-un Jung (15-3-1 MMA, 4-2 UFC), which got him his first UFC post-fight bonus, to boot.

Jung hadn’t lost a fight since his third pro bout nearly seven years ago in his home country of South Korea. In the UFC, he was out to a 4-0-1 start with three finishes before he ran into Jacob’s fist.

“They had offered Jung, and I knew it was going to be a tough test,” Jacoby told MMA Junkie at his post-fight news conference. “I knew he was solid, had that long unbeaten streak, and very worthy. I just put it in my mind I had to defend my spot.

“Jumping in the top 15 and fighting that fight first – it’s pretty risky. I had more nerves this fight than usual, but I’m such a veteran I knew they were going to work in my favor. The guy that was working my corner, part of the commission, he told me afterwards, ‘I’ve got one word for you: Composure.’ He’s like, ‘From the time I saw you walk in, you were completely composed.’ I felt cool, calm and collected and went out there and did my thing. I knew it was going to be a great day.”

Jacoby lost two UFC fights in 2011-2012 and found himself outside the promotion. In 2020, one fight into his return to MMA, he won his way back through Dana White’s Contender Series.

He’s 6-0-1 in the UFC with three knockout wins since he came back, and now with near certainty, Jacoby can expect more solid tests at light heavyweight.

Check out Jacoby’s full post-fight interview in the video above.

Sean O’Malley Wasn’t Expecting Petr Yan To Accept At UFC 280: ‘It’s A Risky Fight For Him’
Terrance McKinney Pitches Two UFC Veterans For His Next fight
Vera KOs Cruz in 4th round at UFC San Diego
Dana White explains why Bo Nickal was not given UFC contract after looking ‘incredible’ at DWCS
What’s Next For Dominick Cruz?