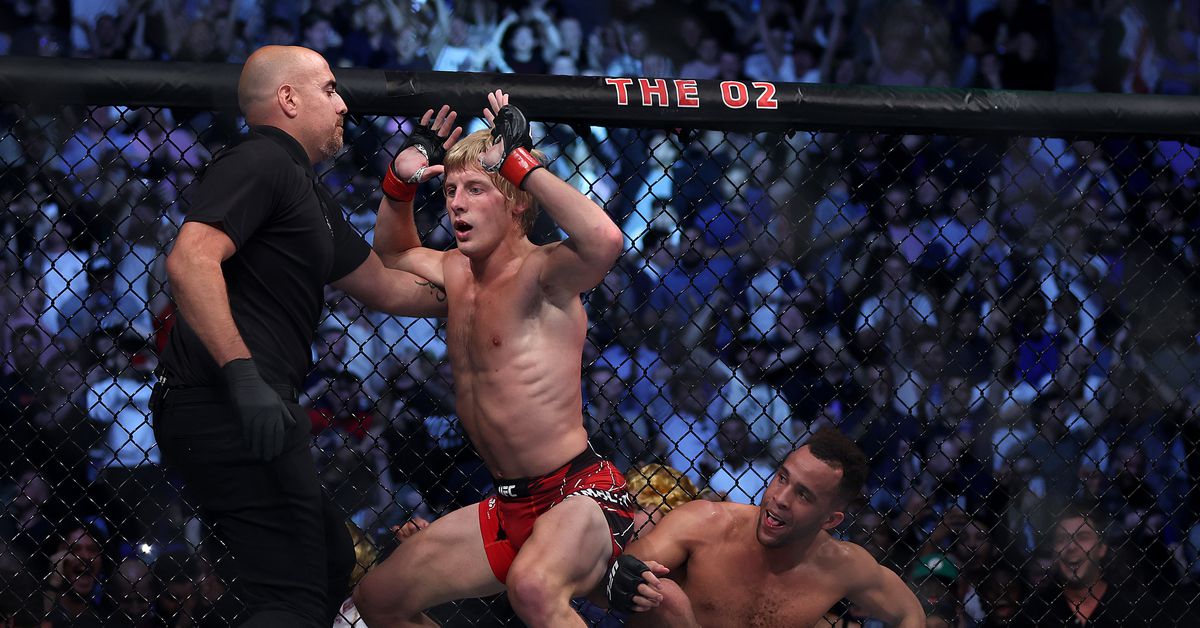 Muhammad Mokaev does not condone the behavior of rising lightweight star Paddy Pimblett and he’s letting “The Baddy” know about it.

Mokaev, who defeated flyweight Charles Johnson yesterday afternoon (Sat., July 23, 2022) at UFC London live on ESPN+ from inside O2 Arena in London, England, caught up with reporters after the fight to discuss his performance. Pimblett’s name was brought up and Mokaev held nothing back in addressing the Englishman’s negative affect on the sport.

“There’s so many guys that don’t get a lot of media attention that should get it,” said Mokaev (via Cageside Press). “Example, Arnold Allen. It’s Leon Edwards. It’s Tom Aspinall. Nathaniel Wood. These guys are amazing, good examples. I don’t disrespect the media, but you give a bulls—t guy like Paddy Pimblett attention.

“These guys never reach the top 15. Like, realistically, [if you understand MMA] he’ll never reach it. I don’t think he’s a great role model for young guys. Please follow Tom Aspinall, Arnold Allen, Leon Edwards, real men inside the cage and outside the cage. I’m proud to be on the same card as a man like Tom Aspinall.”

Pimblett, who was one of the biggest attractions on the UFC London card, delivered in his main card showdown with fellow lightweight Jordan Leavitt. “Baddy” secured a second-round submission before utilizing his post-fight interview to raise awareness for mental health. It was a great moment to say the least, but Mokaev is looking at the big picture and doesn’t believe Pimblett is setting the right example.

“This guy pulls his pants down,” Mokaev said. “A man doesn’t do this. Women don’t do this stuff. Pulls his pants down, get fat, drink beer, like animal. Men in Liverpool, I know real Scouse people, they don’t do stuff like this. This guy is just too much. I’m not a hater, I just want to see a newer generation follow real men. If you talk about UK guys, there’s Tom Aspinall. There’s Arnold Allen. Leon Edwards. Men of the world, of what they’re doing, they will back you up.

“Not this guy, walk behind security when he sees a camera then he’s like a real guy, but when there’s no camera he’s hiding. I see this. I know this energy. I’m not some kid like, ‘Everybody push me to the cage, go fight please.’ I grew up crazy too.”

What do you think, fight fans? Is Pimblett doing too much or is he playing right into the hands of MMA fans everywhere?