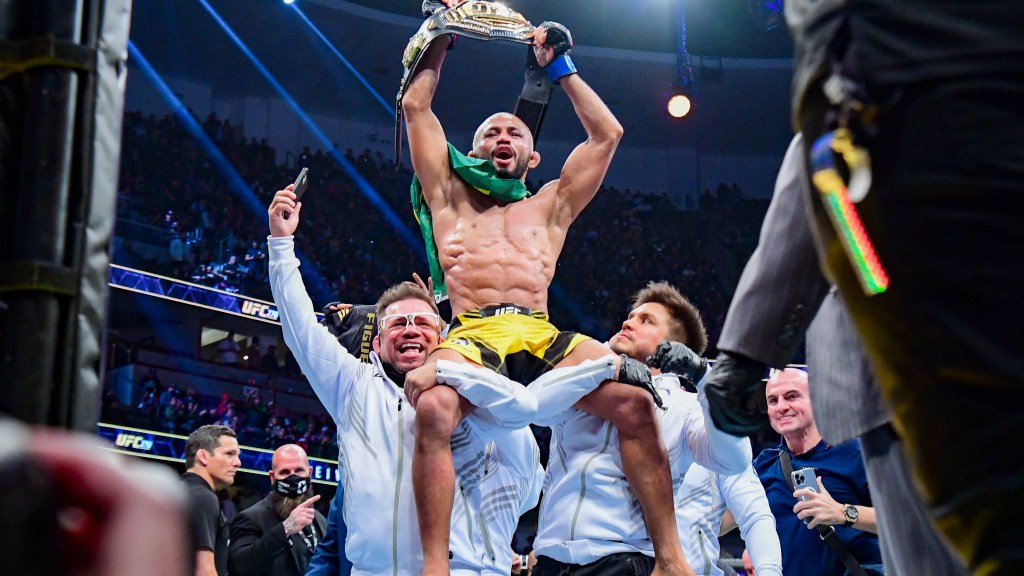 Deiveson Figueiredo claims he has no rooting interest in tonight’s UFC 277 interim title fight between Brandon Moreno and Kai Kara-France.

Figueiredo (21-2-1 MMA, 10-2-1 UFC), the reigning UFC flyweight champion, has been dealing with a hand injury for the past several months. It caused him to decline a title defense against Moreno (19-5-2 MMA, 7-2-2 UFC) in what would be their fourth consecutive meeting, so the promotion opted to create an interim belt and bring Kara-France (24-9 MMA, 7-2 UFC) into the mix.

If one thing has been proven by the UFC over the years, it’s that the schedule stops for no one and the organization will continue pushing forward with events regardless of who is available. In this particular circumstance, though, Figueiredo said he didn’t have any issues.

“I was so banged up,” Figueiredo told MMA Junkie through an interpreter. “I couldn’t accept this fight right now. I understand they were going to fight for this anyway and it’s important for them to fight. The belt is mine. They’re going to come for my belt. Surely by the end of the year, the start of next year I will be ready to go and ready to face whoever wins this.”

Figueiredo has not competed since January, when he regained the 125-pound belt with a split decision win over Moreno at UFC 270. The time off has been a blessing in disguise, however, because it’s allowed Figueiredo to make some major adjustments to his career.

Not only did the Brazilian switch management teams to join VaynerSports, but he said he’s likely to relocate full-time to Arizona where he can work closely with Henry Cejudo at Fight Ready MMA.

Figueiredo has also been very vocal about his UFC contract, and how he thinks he should be paid more after what he’s done inside the octagon during his tenure. He said he’s allowing his new team negotiate with the UFC brass, though, and expects everything to come out smoothly.

For the UFC I’ve always put on a show,” Figueiredo said. “The UFC got me to put on a show and I have not let them down. I have always given them a show an I always go into that octagon to make things happen. They are a great company to work for. I love being there and I do have very good management. He’s handling it and that relationship is well managed and I’m sure everything is going to work out to compensate me well.”

As Figueiredo gets all his ducks in a row, he will wait for his next opponent to emerge from UFC 277, which takes place at American Airlines Center in Dallas with a main card that airs on pay-per-view following prelims on ABC/ESPN and ESPN+.

Although Figueiredo has history with Moreno and they remain deadlocked at 1-1-1 in their trilogy, he said he’s not hopeful for one winner over the other. But he said Moreno, who has taken some shots at him during fight week, better have his focus in the right place.

“As far as any dealings I would have with Brandon Moreno, as far as any unfinished business, there’s nothing to be said there,” Figueiredo said. “The only communication between me and Brandon Moreno is me hitting his face. He has made racist comments in the past, I’m always going to touch that point. … He doesn’t need to worry about me, he needs to worry about Kai Kara-France, because Kai Kara-France wants to rip his head off. That’s the guy that’s going to come for you. Whoever comes to me they’re going to want the belt, so I’m not worried about picking at this point.”