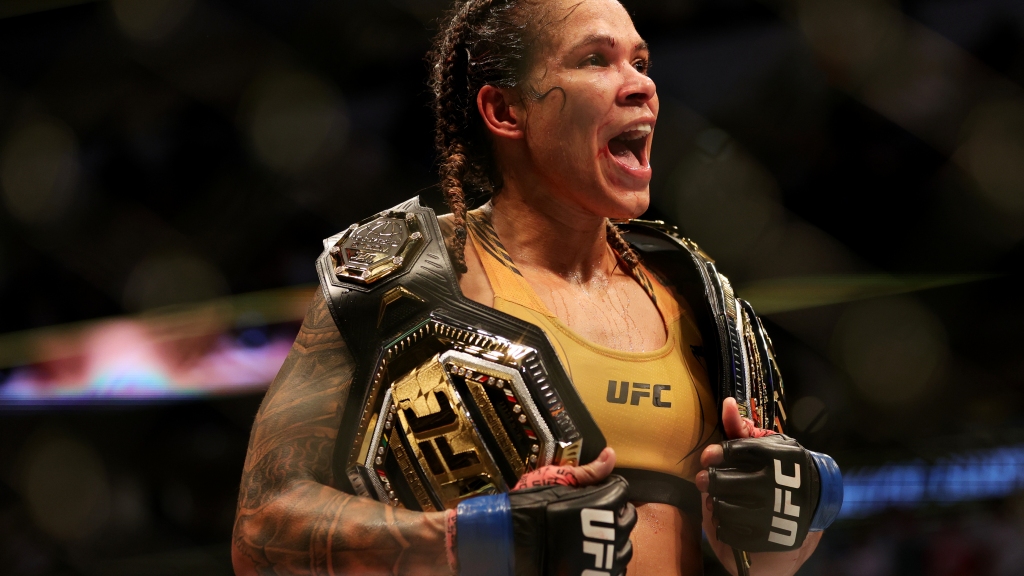 The UFC closed out an absolutely packed July schedule Saturday with UFC 277, which took place at American Airlines Center in Dallas and featured two championship fights at the top of the bill.

The main event saw Amanda Nunes (22-5 MMA, 15-2 UFC) show why she’s considered the greatest female fighter of all time when she won back the women’s bantamweight title from Julianna Pena (11-5 MMA, 7-3 UFC) by unanimous decision after losing it in a massive upset this past December.

For more on the numbers, check below for MMA Junkie’s post-event facts from UFC 277.

UFC 277 marked the 10th event in UFC history to feature two or more finishes stemming from body strikes. UFC on FOX 31 was the only event with three.

The UFC Promotional Guidelines Compliance payout for the event totaled $313,500.

Debuting fighters went 1-2 on the card.

Betting favorites went 11-2 on the card.

Betting favorites improved to 16-10 in UFC headliners this year.

Nunes’ 10 victories in women’s UFC title fights are most in company history.

Nunes has defeated seven fighters who once held an undisputed UFC belt, the most of any active fighter in the organization.

Nunes’ 15 victories in UFC competition are most for any female in company history.

Nunes’ 12 victories in UFC women’s bantamweight competition are the most in divisional history.

Moreno improved to 5-1-2 since he returned to the UFC for a second stint in September 2019.

Moreno has earned 15 of his 19 career victories by stoppage.

Moreno became the fourth fighter in UFC history to win a championship bout with a knockout stemming from a body kicks. St-Pierre, Johnson and Ronda Rousey also accomplished the feat.

Pavlovich’s four-fight UFC stoppage streak is tied for the third-longest streak among active fighters in the company behind Tuivasa (five) and Jalin Turner (five).

Pavlovich has earned 13 of his 15 carer victories by stoppage. He’s finished all of those wins by knockout.

Pavlovich has earned all four of his UFC victories by first-round knockout.

Lewis has suffered seven of his eight career stoppage losses by knockout.

Ankalaev’s eight-fight UFC winning streak at light heavyweight is the second-longest in divisional history behind Jones (13).

Ankalaev has earned all five of his UFC stoppage victories by knockout.

Smith fell to 11-6 since he returned to the UFC for a second stint in February 2016.

Smith has suffered 14 of his 17 career losses by stoppage.

Matthew Semelsberger (10-4 MMA, 4-2 UFC) has suffered both of his UFC losses by decision.

Rafa Garcia (14-3 MMA, 2-3 UFC) has suffered all three of his career losses by decision.

Morales has earned both of his UFC victories by knockout.

Adam Fugitt (8-3 MMA, 0-1 UFC) has suffered both of his career stoppage losses by knockout.

Edwards has earned all three of her UFC victories by decision.

Kim has suffered all six of her career losses by decision.

Negumereanu has earned 11 of his 13 career victories by stoppage.

Potieria has suffered both of his career stoppage losses by knockout.

Diamond suffered the first decision loss of his career.