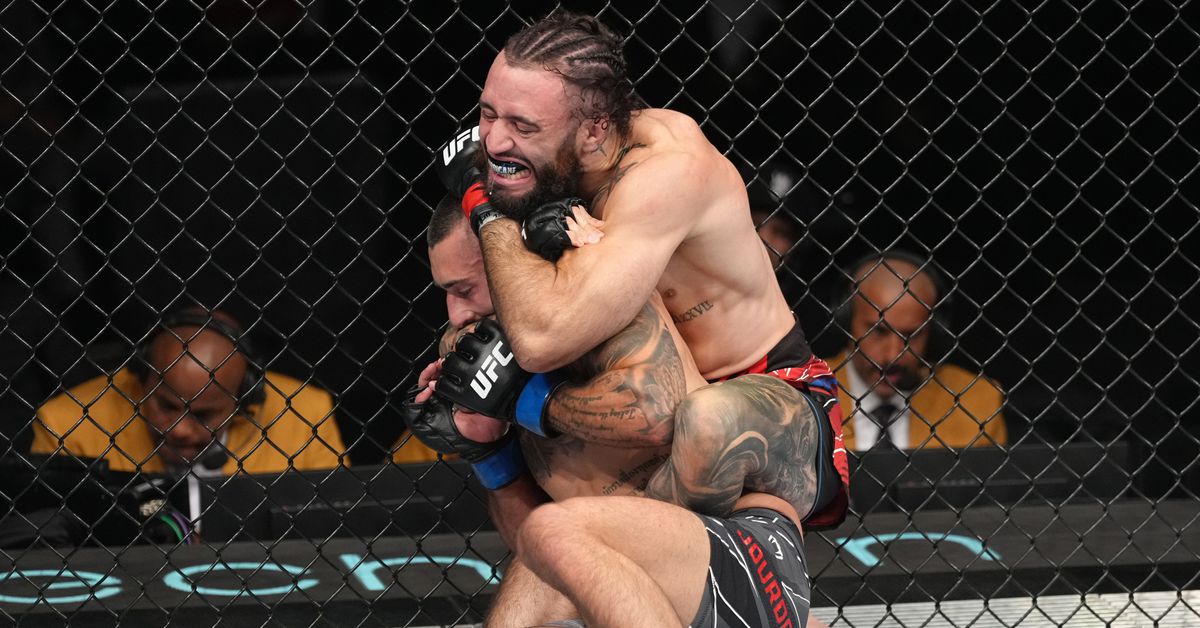 When Shane Burgos scored a hard-fought decision over Charles Jourdain just a couple weeks ago at UFC Long Island, the Featherweight contender fulfilled the final fight of his UFC contract. Burgos opted to fight out his contract, essentially betting on himself to perform well and win, lest he enter the open market on a rough patch.

“I was thinking about it the whole time,” Burgos explained (via MMAFighting). “I feel like you just double down on yourself, and it shows a level of confidence. It puts a ton of pressure on you, 100 percent, because you don’t want to go out on a loss – you don’t have any leveraging power over anything, and it’s just a bad look, for sure. But I don’t let that kind of pressure get to me. The pressure more so was on me to get a finish.”

While the finish didn’t materialize, Burgos ultimately did win. 15-3 as a pro and ranked inside the Featherweight Top 15, Burgos is an accomplished scrapper in the prime of his career. He’s also known for being highly entertaining, and he’s now in a position to field offers from UFC and rival promotions alike.

“I love being in the UFC,” he said. “I love being a UFC fighter. But it doesn’t make sense for me to not ‘test the waters,’ but we’ll see what they come back with. It would be negligent of me and disrespectful to my family to not even hear other numbers, and I would love to hear some other numbers. I’m not going to be sitting back for four or five months waiting for a deal, but yeah, you want to throw some numbers at me, I’m definitely open to listen.”

Burgos continued on to explain that this type of fielding offers has grown more common in recent years.

To an extent, UFC competition has risen a bit, particularly as UFC continues to release established athletes in favor of younger talent. Organizations like Bellator, PFL, and One are more willing to compete for contracts, which can absolutely benefit the athletes. At the same time, it remains something of a risk, ask negotiations can mean costly months spent on the sidelines too.

The best part of UFC 277 was that we got not one, but TWO body shot stoppages!

Dober showing that it doesn’t take that many solid body shots (just 12 by my count here) to put someone out, especially when you’re a powerful puncher. pic.twitter.com/LCiedet2eX

I might actually have to watch a BKFC event. This is a crazy signing!

A big match up at women’s Flyweight:

Return of “The Lioness.”

Pantoja has to be one of, if not the best back taker in the UFC right now. Even in his losing fight against Askarov he somehow manages to go from bottom position with Askarov standing on top of him, to between Askarov’s legs and sit Askarov down in back control. pic.twitter.com/gfMxAYaGbp

Quick team mate highlight: Ryan Loder only started training MMA in 2020, and he’s already built up a 4-0 professional record with three stoppages similar to this one. Of course, being an All-American wrestler and collegiate wrestling coach certainly helps advance one’s fight career quickly …

You know you want to click through and watch an entire thread worth of Mark Hunt knockouts.

Heel to the gut:

This is what we refer to as a close call.

Midnight Music: I vaguely feel like I may have posted this already, and I apologize if so.