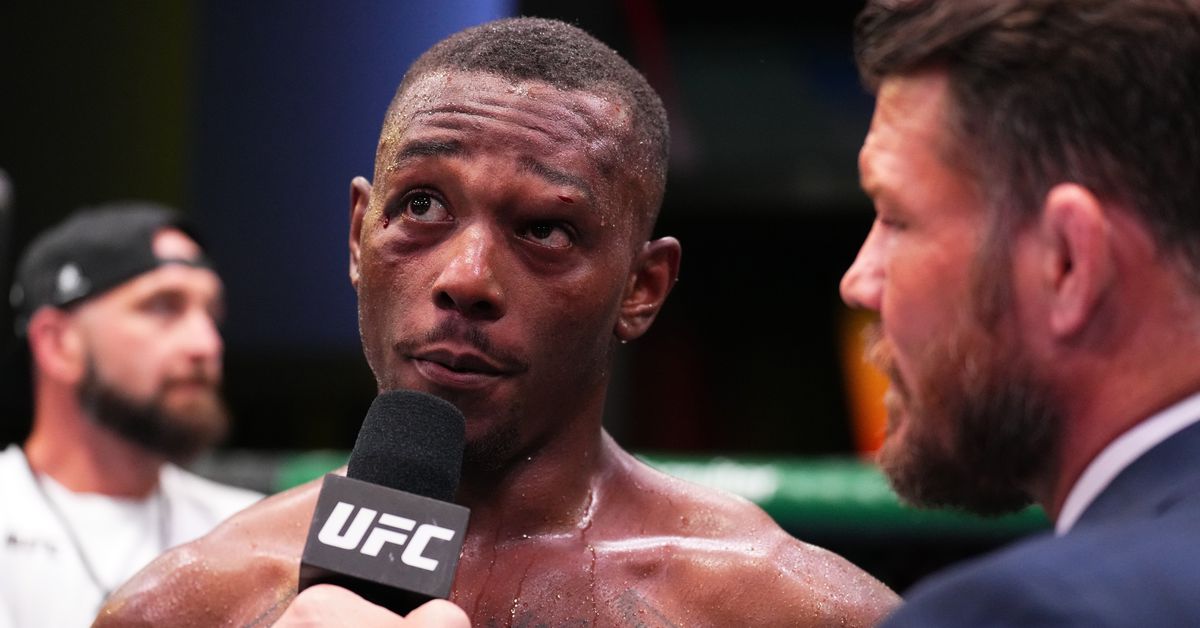 Fresh off a knockout win over Thiago Santos in the UFC Vegas 59 main event, Jamahal Hill isn’t giving up hope that his next fight could be a title shot.

As much as that might seem like wishful thinking with UFC light heavyweight champion Jiri Prochazka welcoming an immediate rematch against Glover Teixeira in his first title defense, Hill hasn’t seen any contracts signed or announcements made on that matchup.

That’s why he doesn’t see any reason he shouldn’t be in consideration for the opportunity, especially after Prochazka earned his own shot at gold after only two fights in the UFC.

“We’ve seen it before,” Hill said on The MMA Hour. “That’s how [Jiri] got the belt. He jumped [the line] and got the belt. Go down a weight class, Alex Pereira [fighting Israel Adesanya]. That’s not a jump? Everybody else is getting jumped around. Why not jump ‘Sweet Dreams’ around?”

Perhaps even more than the title shot, Hill has always liked the way he matches up with Prochazka since the Czech native first arrived in the promotion. It’s a fight he’s wanted for quite some time, but he couldn’t imagine a better scenario than facing Prochazka for the belt.

While he’s not exactly giving up any secrets or revealing his potential game plan, Hill said he’s seen tendencies in Prochazka’s recent fights that give him an even stronger belief that he would win should they ever meet.

Even as Hill commends Prochazka on the durability he showed in his first fight against Teixeira, the 31-year-old contender promises the same mistakes in a fight against him would end in disaster.

“I think he showed a lot of toughness [against Teixeira],” Hill said. I think he showed great athleticism, great strength, durability and physical ability, but I also saw some holes in his game that I can take advantage of and things that I do well that I feel would give him trouble and lead to his downfall.

If Prochazka is ultimately unavailable, Hill realizes his options suddenly become a lot more limited. There are potential matchups against Magomed Ankalaev or Jan Blachowicz out there, but based on the current UFC rankings, it seems more likely the pair would face either other in a No. 1 contender’s matchup. That leaves Hill on the outside looking in.

Add to that, Anthony Smith is just about to have surgery on a broken leg, and Aleksandar Rakic is recovering from major knee surgery, which takes both of them off the board for the remainder of 2022.

One possible option could be Scottish submission specialist Paul Craig, who handed Hill the only loss of his career. But he doesn’t really see that as a viable option based on what both of them have done since that first encounter. While he’s on a three-fight winning streak with every victory coming by way of knockout, Craig most recently suffered a unanimous decision loss to Volkan Oezdemir in July.

“I mean that’s definitely one I want to get back, but coming off the performance that I’m coming off of and his last performance, that don’t benefit me at all,” Hill said. “If we’re talking main event pay-per-view, hell yeah, let’s run it.”

Until he’s told otherwise, Hill is just going to keep pushing for a title fight against Prochazka. Stranger things have happened before, and he would jump at the opportunity if it was granted.