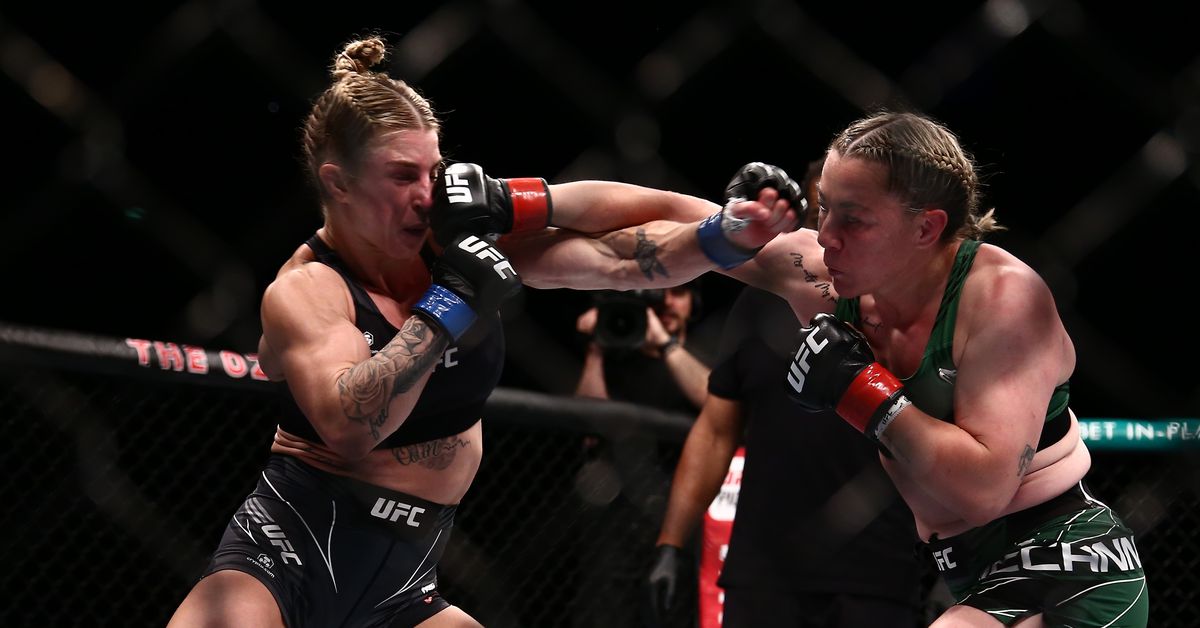 The second UFC London event of 2022 couldn’t hold a candle to the first show. The crowd was lively as ever, but the fights simply weren’t as good! Still, one highlight of the evening was Molly McCann’s star-making win over Hannah Goldy, her second spinning elbow finish of the year. McCann is not the textbook fan favorite, but she’s done well to maximize her stardom and earning potential by building a dedicated base of fans.

As it turns out, her opponent has creative marketing ideas as well. Goldy is one of quite a few members of the UFC roster who has turned to OnlyFans (OF) as a side hustle — that’s how Felice Herrig made bank off feet pics! More recently, genuine Top 10 contenders Raquel Pennington and Tecia Pennington (formerly Torres) announced they’d be using OnlyFans to fund their wedding.

In short, having an OF account alone is hardly breaking new ground for UFC fighters in 2022. However, Goldy is the first woman that I’ve heard about who auctioned off underwear from an event in which she was badly knocked out (H/T CalfKicker). Now, to be clear, Goldy wore the sold garments to her weigh-ins, not the event itself, but you’d have to ask someone more knowledge than me about whether that specification increased or decreased the value.

The auction began two days after UFC London concluded. Goldy posted on her Facebook, “I’m auctioning off the UFC panties I wore to weigh ins. DM me with your bids.” Sadly, the private nature of the bidding means that we’re unlikely to ever learn the final dollar amount.

The latest round of UFC roster cuts continued to feature a surprising absence … also, Ramazan Emeev is good!

UFC President Dana White as a fully realized tomato really made this comic for me.

If you’re looking for a list of old events to rewatch, you could do worse than this!

Tonight’s UFC event is the first event in 8 years that’s had a 100% finishing rate.

It’s now a part of only 10 events in UFC history with 100% finishing rates.

RIP to the great Leandro Lo, a hugely influential figure in modern BJJ.

More of the specifics on Anthony Smith’s unusual injury:

Sean O’Malley is really going hard on the intimidation angle vs. Petr Yan.

Honestly, is this the most legendary knockout in UFC history? Anderson Silva utterly embarrassed a recently dethroned champ a division up — next level stuff.

Goncalves did some nice work backing his foe into the fence and landing, but he got a bit too confident that nothing was coming back his direction.

A kick that never works until it does!

Some higher quality footage of a massive brawl that took place during festival dedicated to the 450th anniversary of the Battle of Molodi pic.twitter.com/eHBk6OG8mJ

Midnight Music: Mavis Staples covering Talking Heads is not a combination I ever thought I’d stumble upon, but I dig it!