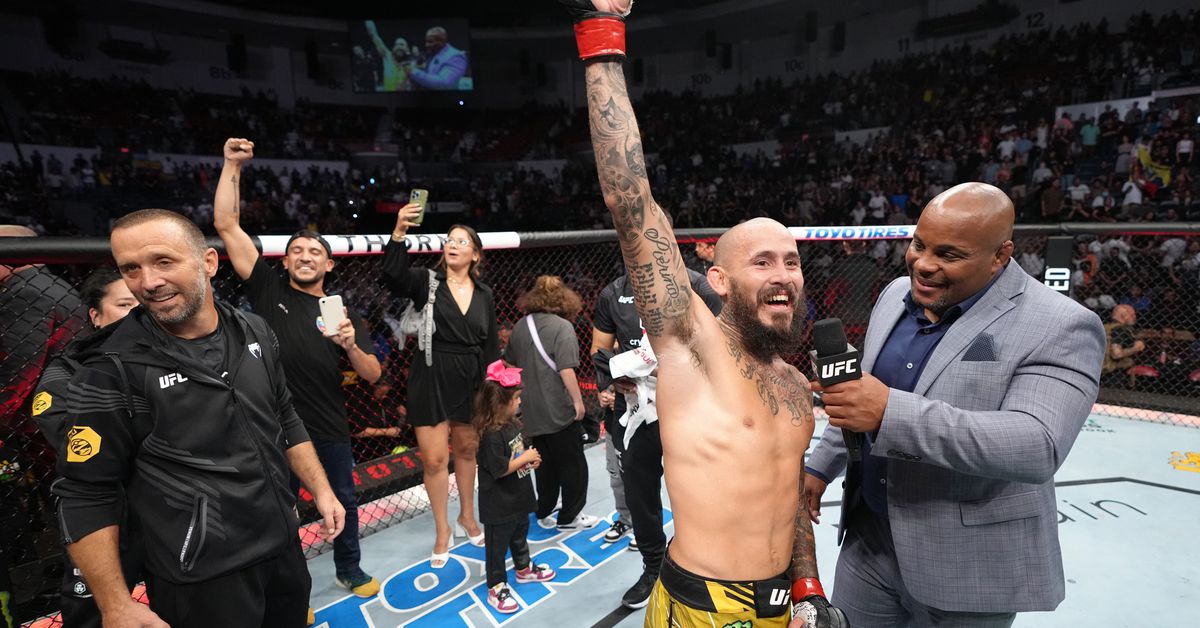 UFC San Diego went down last night (Sat., Aug. 13, 2022) from inside Pechanga Arena in San Diego, California. In the main event of the evening, Marlon Vera knocked out Dominick Cruz to win his fourth straight fight (highlights). In the co-main event, Nate Landwehr and David Onama went to war for 15 minutes to earn “Fight of the Night” honors (see it here).

Going into the fourth round, Vera was likely down all three rounds on the scorecards because “The Dominator” was just a tad bit quicker to the punch than “Chito,” despite the Ecuadorian dropping the former world champion a couple of times. But Vera made sure the judges didn’t have a say in the matter by knocking out Cruz with a nasty head kick and ensuing follow up strikes to seal the deal. Winner of four straight, “Chito” could cause some waves in the Top 5 come next week, meaning that he is one step closer to fighting for the title. It’s been a long an grueling road for Vera to get to this position, and now that he is nearing a world title shot, he is determined to make the most of it after years of struggling to get into the mix and to get the respect he truly deserves.

Jauregui’s UFC debut couldn’t have gone any better. The 23-year old Mexican Strawweight showed why she deserved a spot right in the middle of the main card after she and Iasmin Lucindo — who was also making her UFC debut — put on a show of non-stop action for 15 minutes. In the end, only one could prevail and Jauregui did just that, earning the unanimous decision as well as the adoration of fight fans around the world, as well as that of Dana White’s, who gave them a standing ovation in between rounds, and met with both ladies as they exited the cage to give them their props. All respect to Lucindo, as well, because she was a willing dance partner who will also have a bright future inside the Octagon. But this moment belongs to Jauregui, who remains undefeated at 9-0. She can only get better, which isn’t exactly what the rest of the division wants to hear.

In what was perhaps the wildest fight of 2022 so far, Landwehr and David Onama put on a show for the ages. Landwehr was in trouble early on, but toughed it out to deliver a performance worthy of a $50,000 bonus. Landwehr not only got the win, but he also earned a whole new fan base because he played to the crowd all night. When he had great position on Onama, he opted to stand up to keep the fight going on the feet. And when he did, he delivered, landing several big shots while absorbing plenty from Onama, as well. Landwehr now has two straight wins and plenty of momentum moving forward.

Coming into the event, Calvillo took our spot for the person “Who Needs A Win Badly” having lost her last three fights inside the Octagon. And once the dust settled in her fight against Nina Nunes, the women who was once hailed as the next Conor McGregor or Ronda Rousey suffered her fourth straight loss, losing a split-decision. There is no telling what’s gone wrong for the once-surging star who started her career with an impressive 9-1-1 record, but one has to wonder what the promotion plans on doing with her as a result of her skid. But if Sam Alvey can stick around following a dreadful drought that saw him go 0-7-1 before finally getting the boot after his loss to Michał Oleksiejczuk a week ago, then Calvillo can rest easy knowing she might get one more fight to prove her worth.