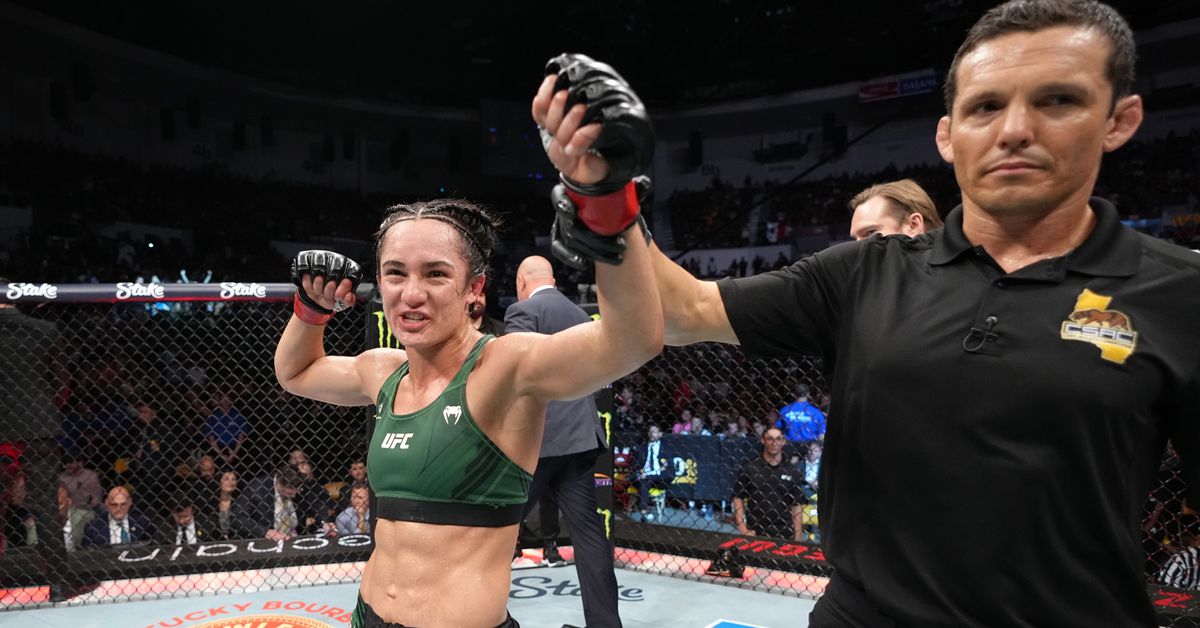 UFC San Diego went down last night (Sat., Aug. 13, 2022) from inside Pechanga Arena in San Diego, Calif. Headlining the event was a Bantamweight bout between Dominick Cruz and Marlon Vera, which saw “Chito” knockout “The Dominator” via a devastating head kick (see it here). In the co-headlining act, Nate Landwehr defeated David Onama via majority decision after a wild back-and-forth affair.

Who He Should Face Next: Yan vs. O’Malley winner…or Sterling vs. Dillashaw winner?

Vera scored another highlight reel knockout after sending Dominick Cruz packing in the fourth round with a vicious kick to the head. Now the winner of four straight, “Chito” could infiltrate the Top 3 following his latest conquest, inching him closer to a shot at the title. And that very well could be next for the Ecuadorian striker, as division king, Aljamain Sterling, and former champion, T.J. Dillashaw are set to collide at UFC 280 in October. Vera could get the winner as long as Petr Yan (ranked No. 1), doesn’t score an impressive knockout over Sean O’Malley, also at UFC 280. Speaking of which, it is very possible UFC opts to give Vera the winner of Yan vs. O’ Malley. “Chito” and “Suga’s” history is well-documented, so a rematch would sell big. As for a fight against Yan, it would be an entertaining fresh matchup to see who gets the next title shot.

Who He Should Face Next: Jonathan Pearce

Now with two straight wins under his belt, Landweher could be headed toward a fight against Pearce, who has won four straight fights. Pearce was last seen defeating Makwan Amirkhani a little less than a month ago in London, England. Like Landwehr, Pearce is trying to slowly carve his way up the ladder in the hopes of one day making it into the Top 15. It’s a tall order since the division is so stacked, but the winner of this fight could make a huge stride toward that goal.

Winner: Yazmin Jauregui
Who She Should Fight Next: Emily Ducote

Jauregui made a successful UFC debut by defeating Yasmin Lucindo, who was also making her first appearance inside the Octagon, in a back-and-forth scrap. As for what’s next for Jauregui, a fight against Ducote sounds like fun. Ducote — the former Invicta FC Strawweight champion — made a successful UFC debut of her own by defeating Jessica Penne just a few weeks ago. Meanwhile, Juaregui is still a baby in the UFC fight game but showed just what she brings to the table with the potential of only getting better at 23 years of age.

Winner: Azamat Murzakanov
Who He Should Face Next: Kennedy Nzechukwu

Murzakanov extended his undefeated win streak to 12, improving to 3-0 inside the Octagon with three consecutive finishes, as well, after stopping Devin Clark via ground-and-pound that was set up by a vicious body shot. Up next for “The Professional,” a fight against Nzechukwu seems ideal. Nzechukwu is coming off a win over Karl Roberson just last month, knocking him out in the third and final round. A seven-fight veteran of the UFC, Nzechukwu could up his own stock if he can hand Murzkanov his first-ever defeat. On the flip side of that coin, Murzakanov can improve his won resume by taking out another experienced UFC fighter that will have the edge on him, as far as time in the Octagon goes.

Winner: Priscilia Cachoeira
Who She Should Face Next: Montana De La Rosa

Cachoeira picked up her second straight win with a ferocious knockout win over Ariane Lipski in the very first round, bringing her record to 4-1 in her last five fights. “Zombie Girl” is starting to find her groove, so let’s give another matchup in quick fashion in the form of Montana De La Rosa. Coming off a loss to Mayce Barber this past April, De Las Rosa would be a great challenge for the Brazilian bomber, and it would give her a chance to get back on track against a rising contender who is starting to find some momentum.

Winner: Gerald Meerschaert
Who He Should Face Next: Andre Petroski

Meerschaert got back in the win column in impressive fashion after he scored a submission win over Bruno Silva, which was set up by a nasty left hook. During his post-fight victory speech, “MG3” called for a fight against Andre Petroski based on some sort of beef they apparently got going. Petroski is currently on a three-fight win streak and was last seen choking out Nate Diaz’s protege, Nick Maximov. If they both want it, there’s nothing to it but to do it.