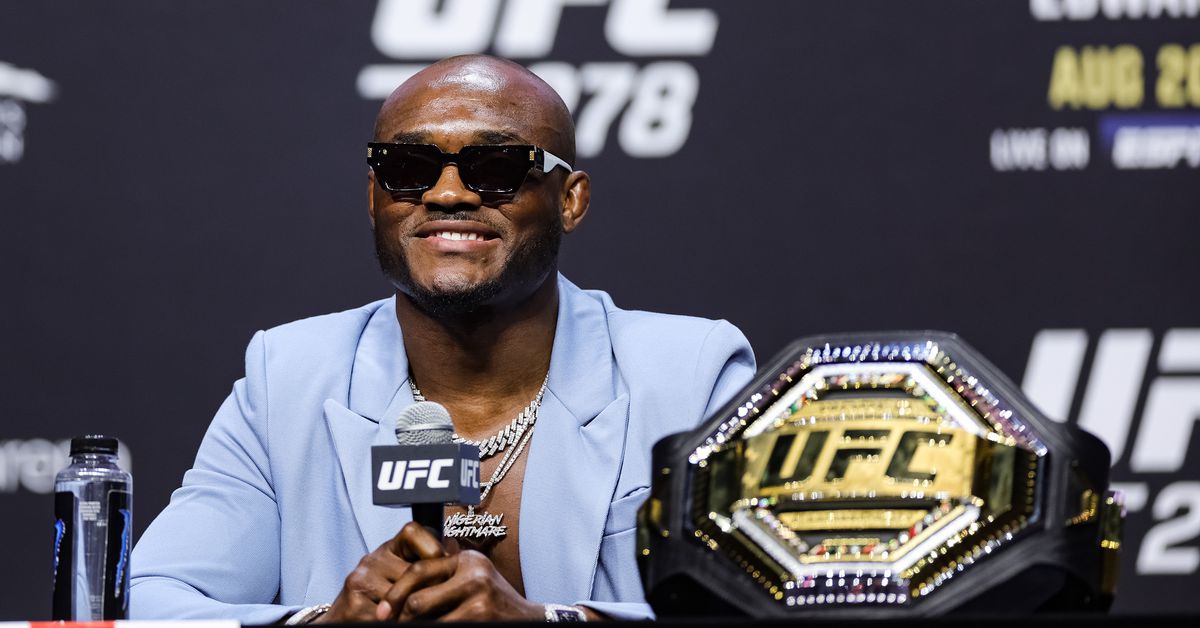 Kamaru Usman is looking to leave no doubt when it comes to who the best fighter of all-time is.

Fighting and winning is literally the key to carving out a lasting legacy in MMA, it’s just a matter of the fashion in which it’s done in along the way. Typically, the sport has seen champions like Georges St-Pierre, Anderson Silva, and Jon Jones establish themselves as some of the best ever by having long reigns within their divisions, taking out any and all comers.

At UFC 278 this Saturday night, the current welterweight champion Usman will aim to continue displaying his dominance with a sixth consecutive title defense and second win over Leon Edwards. After that, the “Nigerian Nightmare” wants to do something completely unheard of: jump over the middleweight division and claim light heavyweight gold.

“A lot of times nowadays, everyone’s throwing around this, ‘G.O.A.T., greatest of all time…’ That’s relative,” Usman told ESPN. “For me, what I want, and this is kind of why I got into the sport … I’m just a competitive guy. I got into sports and I just realized it was something burning inside me that I wanted to compete and compete. I wanted to best that guy. This is the ultimate, mono-e-mono, the sport to do it.

“With that being said with respect to that, I want to be respected. So, when I get in there and I bested everyone, I want you to show me that respect. So, if I bested everyone in my division then I said I will skip one and I just want to prove to you — everyone says pound-for-pound, but that’s just kind of a scenario. You just throw that out, ‘If they were the same weight class, could this guy best that guy?’ And I want to prove that. I want to be able to do that. No one’s ever done it. If I can do that, hey, you put whatever title you want to put on it but ultimately I want the respect.”

At present, Usman is widely considered by the community as the best fighter on the planet regardless of weight class and sits atop the official UFC pound-for-pound rankings at No. 1. Before Usman can even attempt to get a second title, however, he’ll need to have another successful work night against England’s “Rocky.”

Usman and Edwards first went to battle in Dec. 2015, resulting in a unanimous decision victory for Usman and what is currently Edwards’ last loss. Despite the good gap of time since then along with a relatively one-sided showing for the now-champion, Usman admits to a specific moment lingering in his mind from part one of their series.

“There’s just something about Leon,” Usman said. “I respect him so much, he’s a great competitor, tough guy. He’s grinding through it. I’ve said it before, when I’m inside that octagon, I’m the judge, jury, and I will be the executioner. When he said those things, boom. It stuck with me and it’s there to where I replay the whole first fight. Replay his attitude, his mood, his demeanor, and hey, he gave me a little shove in that first fight. I’m still not over it. And I don’t feel like I got enough in that first fight. There’s tons of motivation in this fight to go out there and do what I do.”

State of the UFC welterweight division.

Welcome to the Twitters, Yazmin (and the UFC).

Where does the time go?

So, what did I tell you guys about Jauregui? Thanks for reading!

Friday: 58% of 496 total votes answered “Yes” when asked, “Was the Prochazka vs. Teixeira rematch the right light heavyweight title fight to make?”

Tuesday: 79% of 526 total votes answered “No” when asked, “Will Cris Cyborg vs. Kayla Harrison ever happen?”