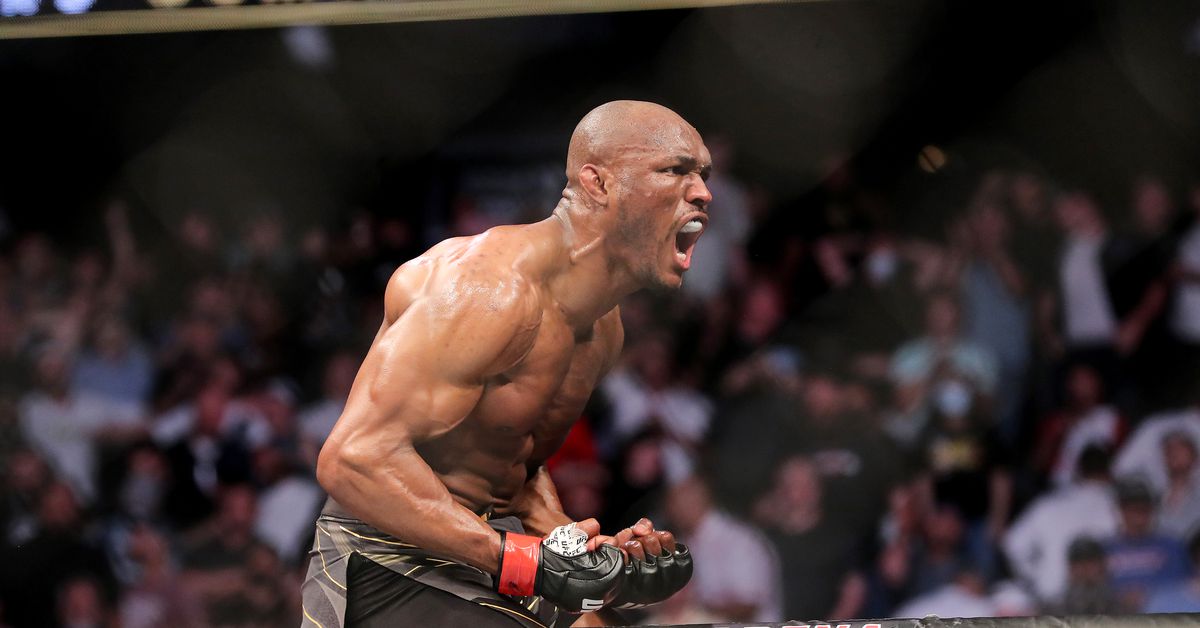 Usman is at the top of his game. He’s racked up five title defenses and a 15-fight UFC win streak, and though he’s no longer winning without ever coughing up a round in the process, Usman is looking mighty comfortable at the top. Frankly, champions don’t discuss jumping up two weight classes when they feel particularly threatened by the opposition in their weight class.

That does not, however, mean Edwards is an easy task. “Rocky” is in his prime and has plus skills in all areas, so Usman will have to mind his P’s and Q’s opposite his latest challenger.

Let’s take a closer look at his skill set:

Between Henri Hooft and Trevor Wittman, Usman has turned great physical gifts into genuine kickboxing skill. He’s still a bit stiff in his movement, but when a fighter hits as hard as Usman, such a flaw is easily forgivable.

The jab has developed as a major weapon for Usman — a great tool given his gigantic wingspan and muscles popping from every section of his upper body. He may have ultimately been throwing jabs mostly with his arm at Gilbert Burns, but they were thudding jabs all the same. From either stance, Usman shot out his fist direct from his shoulder to the chin, and those jabs really ruined Burns’ night (GIF). Usman punished Burns from long range with this power jab, a distance where Burns’ hooks and overhand were unlikely to reach their target. When Burns instead tried to fire kicks, Usman interrupted them by stepping forward with more hard jabs, taking full advantage of Burns’ habit of really committing his weight forward as he kicks (GIF).

Establishing the jab so effectively kept Usman in control of exchanges and allowed him to set up further offense, like this lovely pull counter (GIF).

In his rematch vs. Jorge Masvidal, Usman was smoother than ever. The champion really did a masterful job of feinting and giving “Gamebred” different looks, picking up reads on what Masvidal was looking to land. When he picked up on Masvidal looking for his check hook — something of a signature technique for the Floridian — he was able to time his right hand inside the punch.

He landed a couple clean rights inside the first frame as a result. Then, he became the first man to truly knock Masvidal out cold (GIF).

In Usman’s first bout against Covington, he battled the Southpaw for five rounds in a very competitive, high-volume kickboxing match. Ultimately, Usman’s body work was a major factor in his victory. From early in the fight, Usman was jamming hard right hands into the solar plexus. In addition, his snap kick to the body landed well.

By the fifth round, Usman really found the timing and distance on his right hand. Earlier in the fight, Covington did well to jab, dip off the center line, and land as Usman tried to fire back. That combination of Usman’s body work and general fatigue left Covington a bit slower, however, and Usman capitalized by shuffling into range before unleashing his accurate cross (GIF).

Body work wasn’t as vital in the second match, but Usman’s tighter boxing was. Early on, Covington tried to establish the jab and calf kick. Usman didn’t have a terribly difficult time with either, parrying lots of jabs then answering back with his own more powerful jab. In general, Usman did well to maintain his good positioning as Covington threw, allowing him to answer with heavy counter shots and find the chin.

Even prior to working with Wittman, Usman was jabbing in an attempt to make full use of his 76-inch reach. In Orthodox, his goal is generally to snap his opponent’s head back and establish range. As a Southpaw, however, it’s more common for Usman to flick the jab, slip his head off the center line to avoid the counter and find a home for his left. The cross is a major weapon for Usman from either stance, and again it’s a difference or power vs. loose precision. Fighting right-handed, Usman will fully commit to the cross nearly every time and try to blast his opponent (GIF). As a Southpaw, Usman is far more likely to pitch the left hand smoothly, and he’s also more likely to follow up with a second cross or right hook.

Usman does a great job of shifting between stances with the cross. For example, he can throw a cross as an Orthodox and step into Southpaw, allowing him to follow up with lead hand right hooks as his opponent circles away. Against Moraes, Usman used the established threat of the left cross to shift back right-handed, taking a new angle while Moraes covered up. From this angle, Usman dropped a right-handed cross straight to the jaw (GIF).

Another layer to Usman’s offense is his ability to use level change feints. Usman doesn’t just squat down, he reaches for the leg in a very convincing feint of a snatch single. Opposite Sean Strickland, Usman repeatedly used level-change feints from the Southpaw stance to great effect. Strickland is a right-handed fighter, and the open stance dynamic meant that his lead leg was vulnerable to the snatch single. Usman would reach out for the single frequently, instead coming up with a left cross or right uppercut-left high kick. It was seriously effective, and having to guess whether to defend a takedown or punch really stymied Strickland’s own offense.

Usman is a fairly smart kicker as well. He mostly relies on his hands, but Usman is active in attacking his foe’s lead leg. Usman tends to set the low kick up with feints rather than combinations, helping himself out by mixing targets to the thigh and calf. He’ll also suddenly go Southpaw and punt the inside of the leg. Similarly, Usman will shift Southpaw and kick to the body, a very effective strategy.

In his bout with Tyron Woodley, Usman’s goal was to close the distance, and he did a lot correctly to accomplish that mission. He fought from the Orthodox stance, keeping his left shoulder to his chin and left arm extended, fully prepared to intercept Woodley’s overhand. As he pursued, Usman stayed behind his shoulder and jabbed, walking Woodley toward the fence.

Once in the clinch, Usman went to work. At times, he was able to pull a hand down and fold over hard elbow strikes, but it was often even more simple than that. Usman found his best success by pushing off and unloading combinations while Woodley’s back was still to the fence, and he did a lot of damage simply by hammering the ribs from the over-under position (GIF).

Usman’s clinch work was a major theme against Masvidal in the first bout as well. Though he received a lot of Internet hate for excessive foot stomping, Usman also did real damage. His uppercuts into the mid-section looked painful similar to the Woodley fight, and he found a home for heavy elbows as well. At one point, he landed a slick setup from the over-under, using his underhook hand to reach across the body and control Masvidal’s wrist. This freed up a path for Usman’s overhand side to elbow “Gamebred” clear in the face.

A multiple-time All American and national champion at the Division II level, Usman also accrued experience as a freestyle wrestler after college. More than any one technique, both as an athlete and wrestler, Usman is a devastating combination of great physical strength and relentless conditioning.

Because of his ability to switch stances, Usman is very slick at blinding his opponent with straight shots and setting up a high-crotch takedown entry on the lead leg. Once in on the leg, Usman will threaten a dump takedown. When his opponent shifts his weight back, Usman is able to instead catch the far leg and lift to complete a double leg.

Although shooting with his head to the outside does leave him more at risk of landing in a guillotine, it also has the benefit of making it easier to cut an angle and take the back if his opponent defends the shot. In his bout with Emil Meek, Usman reminded the world that his mat returns from that position are excellent.

Usman has the physical strength to lift and slam any opponent that isn’t properly defending easily, but he’ll also mix inside trips into his offense. Generally, if his opponent is able to defend the inside trip, the slam will be available, and the inverse is true as well (GIF). This proved true from the front of the body as well opposite Woodley, as Usman stepped outside of his knee while attempting a body lock takedown, scoring a big slam when Woodley attempted to turn and face him again.

The only significant test of Usman’s takedown defense came opposite Demian Maia, whom he routinely shut down. In one particularly interesting exchange, Maia shot for a high-crotch single and achieved solid position. From there, he switched to the double leg, but Usman got his hips back. Maia attempted to transition both to trip out the far leg and to score a body lock throw, but both times Usman was able to defend, either by switching his hips or applying pressure from the whizzer.

It was fantastic defense.

In the rematch with Covington, “Chaos” really tried to test Usman’s defense. Though I’d argue he actually managed to score a duck and take Usman down briefly, a huge majority of Covington’s attempts were simply shut down by the sprawl. When Usman gets heavy on an opponent, there’s just nowhere to go. Meanwhile, he’s whacking their ribs with short punches.

Usman’s top game is almost entirely wrestling, pinning wrists and battering opponents largely from either the guard or turtle. That said, he does work to pass into mount and will attack with submissions if his opponent presents the opportunity — such as when he tried to kimura Strickland from half guard.

The sole submission win of Usman’s career named him The Ultimate Fighter (TUF) 21 champion. Opposite Hayder Hassan, Usman’s dominant takedowns and ground striking were overwhelming his American Top Team foe. Hassan tried to latch onto Usman’s head to control him, but Usman passed into mount, creating the perfect situation for an arm triangle. Once Usman’s hands were locked, it was easy for someone of Usman’s strength to drop his weight and finish the hold.

Against Maia, Usman nearly fell victim to Maia’s high-crotch to back clinch to back take transition in the first round. However, Usman countered by somehow maintaining an overhook even as Maia climbed to his back. It was an interesting display of flexibility, strength and technique, and he managed to stall out the Brazilian.

Usman has shown no signs of decline, and his improved power punching has complimented his wrestling beautifully. Against Edwards, he’ll have to combine both in order to outmaneuver the crafty kickboxer.

Andrew Richardson, a Brazilian jiu-jitsu brown belt, is a professional fighter who trains at Team Alpha Male in Sacramento, California. In addition to learning alongside world-class talent, Andrew has scouted opponents and developed winning strategies for several of the sport’s most elite fighters.