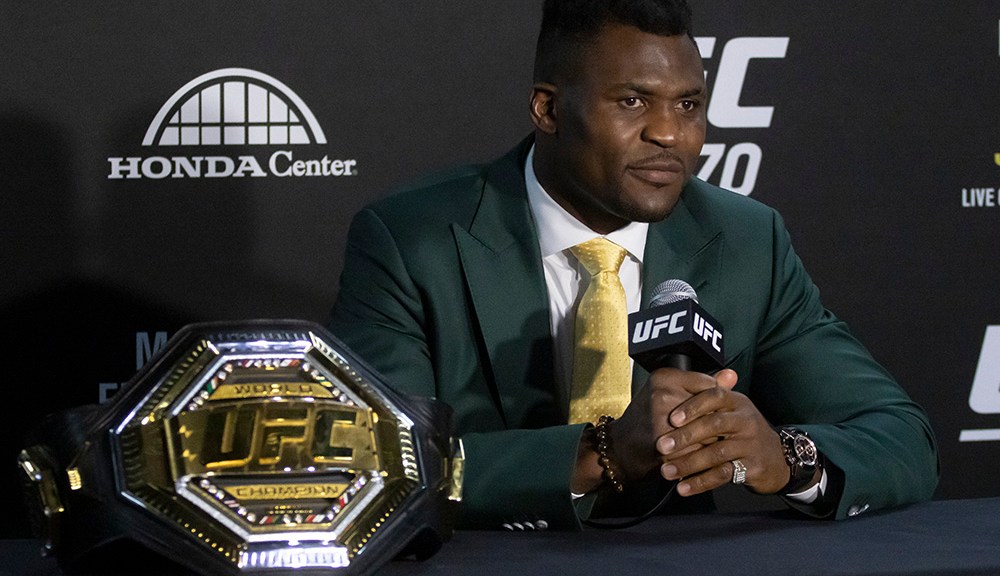 Francis Ngannou is no stranger to expressing his feelings about UFC contracts.

The UFC heavyweight champion has been in an ongoing contract dispute with the promotion, and has said in the past his issues go beyond that of larger fight purses.

“It’s not simply money,” Ngannou told reporters at the UFC 270 post-fight press conference after defeating Ciryl Gane in his most recent outing. “Obviously, money is a part of it, but it’s also the terms of the contract that I don’t agree with.”

Former UFC middleweight champion Luke Rockhold, who is on the verge of competing at UFC 278, aired some grievances of his own at Wednesday’s media day as he sounded off about fighter pay. Apparently, Ngannou watched Rockhold’s interview, and his words inspired the heavyweight champ to fire off a series of Tweets critical of the UFC’s sponsorship restrictions.

According to Ngannou, he lost out on a deal worth over $1 million because of the UFC’s sponsorship deal with a cryptocurrency platform.

Read below to see what Ngannou had to say as he vented his frustrations.

After listening to Luke Rockhold sound off about fighter pay, the heavyweight champ vented frustrations with UFC sponsorships.

“Listening to Luke’s interview was very pertinent,” Ngannou wrote on Twitter. “A lot of things that nobody is talking about it and the company just rolls with it.”

Ngannou says the UFC is exploiting fighters with sponsorships

“Fighters are ripped off with sponsorship,” Ngannou wrote. “It’s a huge source of revenue for us but the company keeps exploiting that for their own benefit.”

“I understand that the sport needs to look good with uniforms, but we should at least have a right for a minimum of 2 approved sponsors for in the octagon,” Ngannou wrote.

Ngannou says he lost out on a million-dollar deal

“Last year, I lost a deal of over a million dollars from a crypto exchange because the partnership with CRYPTO.COM,” Ngannou wrote. “What do I got from it?”

“Inflation is up,” Ngannou wrote.