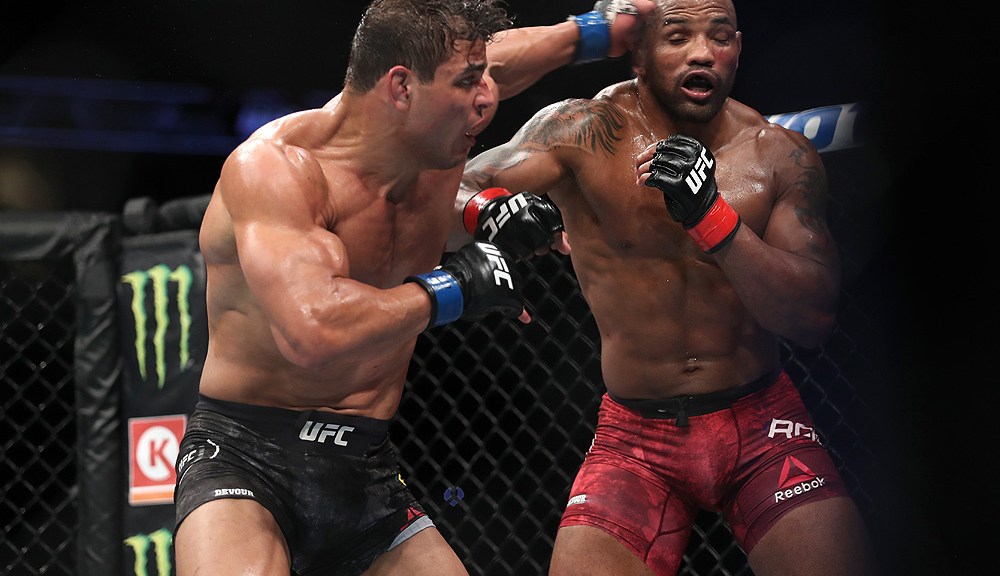 Paulo Costa was not afraid to stand toe-to-toe with Yoel Romero.

Then unbeaten Costa faced former title challenger Romero in the co-headliner of UFC 241 in August 2019.

Costa put his foot on the gas pedal right off the bat, taking the fight to Romero. Costa kept pressuring, but he was met by a Romero high kick and a takedown, which he managed to stuff. Under a minute in, Costa dropped Romero with a short left, but Romero got a knockdown of his own when he blasted him with an overhand right, in what was a back-and-forth first round. Romero was able to back Costa up with a leaping knee through the guard, but the more active Costa was awarded Round 1.

Costa’s pressure continued to pay off as he kept Romero on the back foot. Costa threw big bombs, mixing his attack up to the body. Romero started to snap his jab out, connecting with some solid shots while backpedaling. At the end of the round, Romero landed a takedown as Costa appeared to slow down.

The third round saw Romero ramp up his volume and aggression, where he started to back Costa up with combinations. However, it was too little, too late for Romero as the judges had awarded Costa the first two rounds and Romero the third. Both men were awarded the Fight of the Night bonus.

Since then, Costa (13-2 MMA, 5-2 UFC) has dropped two straight to middleweight champion Israel Adesanya and former title challenger Marvin Vettori. He returns to action Saturday when he takes on ex-champ Luke Rockhold (16-5 MMA, 6-4 UFC) in the co-main event of UFC 278, which takes place at Vivint Arena in Salt Lake City.

Before he faces Rockhold, relive Costa’s battle with Romero in the video above.