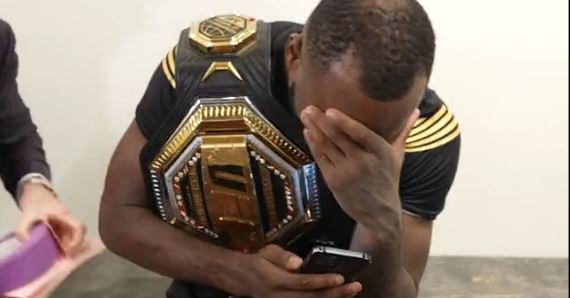 Leon Edwards was overwhelmed with emotion in the immediate aftermath of his incredible knockout of Kamaru Usman at UFC 278. Seeing his mom for the first time, however, brought forth another flood of emotion.

Edwards’ first conversation with his mom was captured by UFC and ESPN.com cameras as he walked backstage at the Vivint Arena in Salt Lake City.

“I told you, mom,” said Edwards, breaking down with emotion as he chatted on video with his mom, one of his closest allies through a tough upbringing in Jamaica and England.

As Edwards walks, tears welling in his eyes, you can hear the celebration on the other end of the line. In fact, it’s tough for Edwards to get in a word as the party breaks out for his fifth-round head-kick knockout of Usman, one of the most shocking endings to a UFC title fight in history.

Eventually, Edwards is overcome with emotion and takes a seat as his family continues to cry out and teammates surround him. Edwards clutches the belt he captured from the jaws of defeat after losing three straight rounds to Usman, who aimed to tie Anderson Silva’s record of 16 consecutive UFC wins and sixth defense of the welterweight title.

Edwards avenged a 2015 decision loss to Usman and upped his current winning streak to 10 of his past 11 fights with a no-contest to Belal Muhammad his only blemish. UFC President Dana White immediately pointed to a potential trilogy with Usman in Edwards’ adopted home county of England.