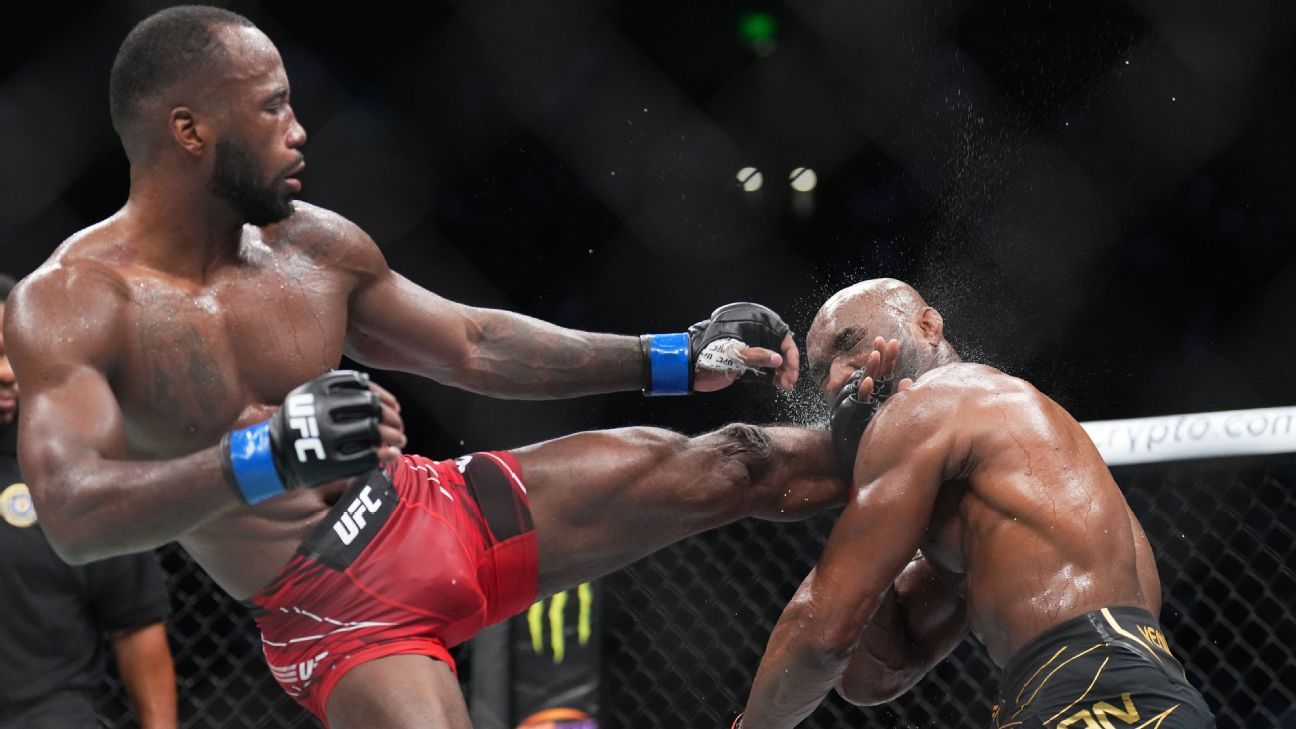 With a head kick in the final round of a fight he was losing handily, Edwards knocked out Kamaru Usman to win the UFC welterweight title in the main event of UFC 278 on Saturday night here at Vivint Arena.

The finish came at 4 minutes, 4 seconds of the fifth round, making it the fourth-latest finish in a UFC title fight.

Edwards snapped Usman’s 15-fight UFC winning streak, which was one off Anderson Silva‘s UFC record. It was one of the most stunning knockouts in the history of the sport. Usman was considered the pound-for-pound best fighter in the world.

Edwards is the first Jamaican-born fighter to win a UFC title and the second England-based athlete to do so.

“It’s more for the people that grew up where I grew up,” Edwards said. “I know it. I felt it. I felt the pressure. I felt the doubt. I felt people saying it couldn’t be done. I was born with nothing.”

Usman had been dominating the fight after the first round and was up 39-37 on all three judges’ scorecards entering the fifth. But with about a minute left in the fight, Usman leaned down to his right to defend an Edwards left, and Edwards caught him flush with a left head kick, sending the 18,321 in attendance into a frenzy.

Usman, who was out on contact, was less than a minute away from a sixth title defense.

“That’s how crazy the sport is,” UFC president Dana White said. “It’s what makes this sport the greatest sport in the world. You can sit through four rounds and four minutes and that can happen in a fight. Anything is possible in this sport.”

ESPN has Usman ranked No. 1 on its pound-for-pound list and on top at welterweight, as well. Coming in, ESPN had Edwards ranked No. 4 at welterweight. This was a rematch of their December 2015 fight, which Usman won by unanimous decision.

“You think of everything that was on the line for Usman tonight,” White said. “Usman fought with absolute and total confidence the entire night. He fought the perfect fight.”

White said a trilogy title fight between Edwards and Usman would be next for both men, adding that he would like to do it in Edwards’ adopted home country of England.

Before the fifth, Edwards’ best round came in the first, when he landed the first takedown of Usman in the UFC. Edwards was able to get Usman’s back and work for a choke. But Usman survived the round.

After that, until the final minute of the fifth, Usman was in total control, using his wrestling and clinch game to suppress Edwards’ offense and mixing in hard combinations with his hands, including some nice work to the body.

“Even though that was one of my worst performances, it is what it is,” Edwards said. “I got a clean finish. … Even on my worst night, I beat the best pound-for-pound.”

Usman (20-2) had won 19 straight fights overall before Saturday. This was his first knockout loss. The Nigerian-born fighter who trains out of Colorado had been UFC welterweight champion since beating Tyron Woodley at UFC 235 in March 2019. Usman, 35, owned two title defenses each over Colby Covington and Jorge Masvidal.

Usman was transported to a hospital after the fight, but he tweeted afterward: “Champs f— up sometimes … but we bounce back and come with vengeance!!”