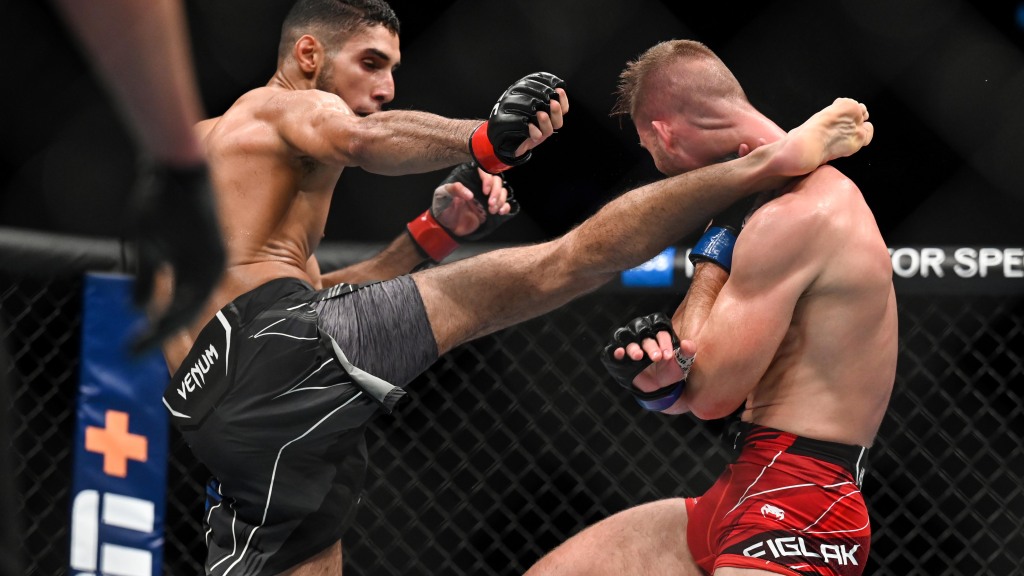 PARIS – Fares Ziam is happy with his performance at UFC Fight Night 209 but disappointed he didn’t get the finish.

The French-Algerian fighter almost got the stoppage when he rocked Michal Figlak with a spinning back elbow in Round 2 this past Saturday at Accor Arena, but Figlak survived. Nonetheless, it was a well rounded effort from Ziam (13-4 MMA, 3-2 UFC), who showed off his striking and grappling in a unanimous decision win in front of his home fans.

“It’s like a dream,” Ziam told reporters, including MMA Junkie at the post-fight news conference. “Because for me, fight in France, first time with UFC, first time in MMA for me in France, super happy.”

“I feel good, because I won tonight, but I need more to finish the fight.”

Ziam was successful in his first fight of a new four-fight UFC deal. He’s ready for a quick turnaround for UFC 280 on Oct. 22 in Abu Dhabi, and is even ready to jump in as a short-notice replacement if any fight falls through.

“Next I want Abu Dhabi, but the card was full,” Ziam said. “In Abu Dhabi, I have two fights: one loss and one win, but let’s go Abu Dhabi. I have no injury, I’m fresh.”

Matt Brown sends warning to Jake Paul: ‘When you’re fighting MMA fighters, you’re in a world of f****** savages’
Khamzat Chimaev BLASTS Daniel Cormier for his CHOICE OF WORDS about relationship with Darren Till!
Sources: Holloway to return vs. Allen on April 15
Cory Sandhagen vs. Marlon Vera rebooked to headline March 25 UFC event
If Joshua can’t get a title fight, he’d consider Ngannou