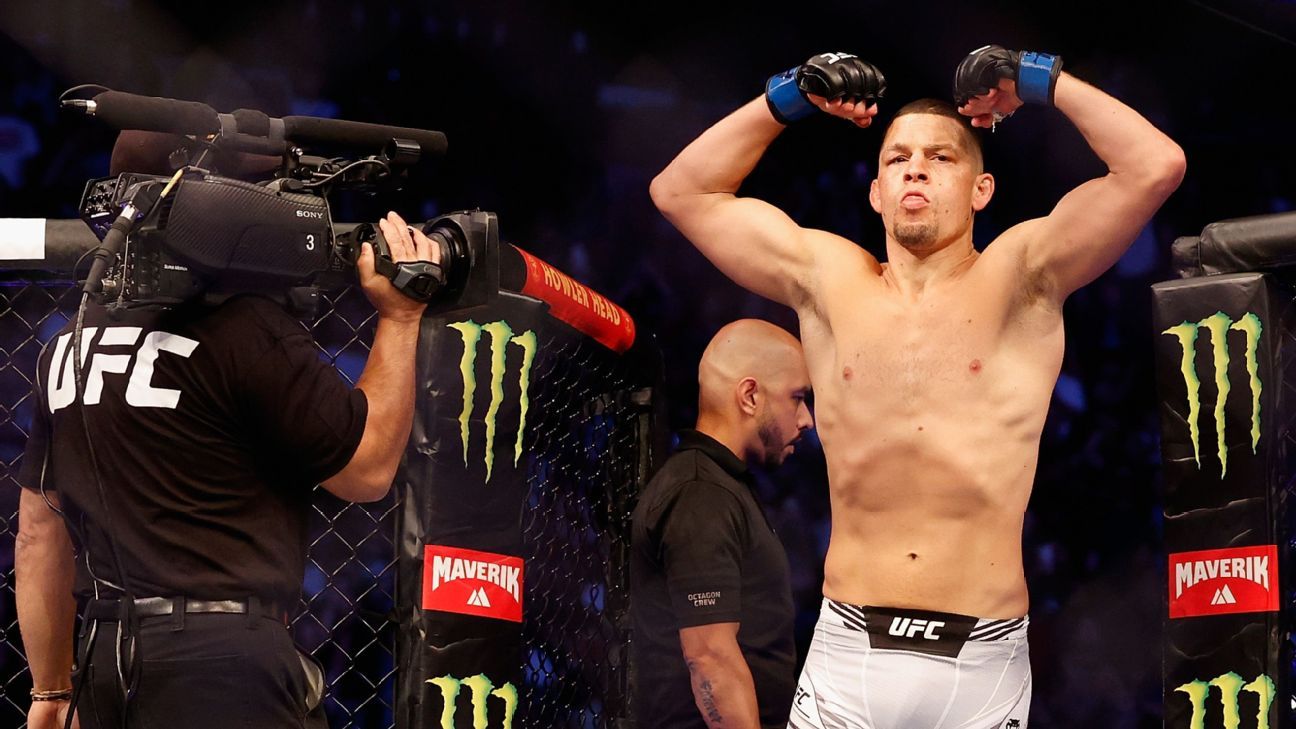 Five of the last six UFC pay-per-view fight cards have been headlined by not just one championship bout but a pair of them. That’s a lot of gold and glory on the line.

By contrast, UFC 279 will have not even a single title contest.

What Saturday’s event in Las Vegas (10 p.m. ET on ESPN+ PPV) will have going for it, though, are two attractions that sparkle no less brightly than a cage full of shiny belts: Nate Diaz and Khamzat Chimaev.

Diaz is the larger-than-life embodiment of the UFC’s onetime company slogan: “As Real As It Gets.” He is unvarnished and unapologetic, an iconic antihero who has become a fan favorite by flaunting his renegade truth ever since he first set foot inside the Octagon in 2007.

Nate Diaz returns to take on Khamzat Chimaev in a welterweight bout in the main event of UFC 279 in Las Vegas.

The in-your-face belligerence that exudes from this man always stirs up a crowd, and this weekend’s appearance could give rise to especially urgent thrills. Diaz will be in the final fight of his UFC contract, and that circumstance has the intriguing potential to ramp up his realness, if that’s even possible.

Across the cage for the main event will stand Chimaev, who since bursting on the UFC scene two years ago has been skyrocketing up the welterweight ranks. That’s because, in going 5-0 in the Octagon, he has put up the kind of numbers that, if plotted out in a superhero film script, would be sent back for a more plausible rewrite. And to watch him pull this off has been spellbinding. Chimaev is not someone whose essence can be captured in words. Again and again he puts on performances you must see to believe — and even then you might accuse your eyes of lying.

So while there will be a dozen other bouts on the card, some of them involving high-profile fighters who on other nights would command the spotlight, make no mistake: UFC 279 will be all about Nate and Khamzat.

With that in mind, here’s a ranking of Saturday evening’s top three attractions — but listed in reverse order, as an homage to the potential for all expectations to go topsy-turvy.

3. The pre-fight: Keeping it real … and resolute?

How does one hype up a clash so unfathomable? The answer: There is no hype more potent than what will organically radiate from these two men when they face off. Stand back and let it all be.

For Diaz, the fight always is on from the moment he is matched with an opponent, long before the cage door opens. A lot of fighters try to get in each others’ heads at news conferences and weigh-ins. But often it comes across as forced, awkward, as much a ticket-hawking ploy as an intimidation tactic. That is never the case when Diaz is getting in the face of his opponent. He lives in that antagonistic space with authenticity, as comfortably as one can be while on edge. And if Diaz is confronting you in a building full of fans, they’re his fans and he is going to draw them into that going-to-battle energy with him.

Will this rattle Chimaev’s stoic self-assuredness? To this point, no opponent has made even the slightest dent in his ironclad armor, and it’s possible — if a bit scary — that Chimaev’s demeanor will not flinch at all during the lead-up to UFC 279. But if ever a scene were capable of testing one’s calm stability, it would be standing nose to nose with a mean-mugging Diaz during the prefight news conference and ceremonial weigh-in, in front a legion of his admirers. Can Chimaev remain unmoved?

There’s also a fight within the fight for Diaz, although he might not frame it that way. He says he and UFC president Dana White are cool, despite Diaz’s decision to fight out his contract to free himself for other opportunities. Still, with his hand resting on the exit door, who knows what Diaz might say or do during fight week? I’m not going to speculate, because by late Saturday night my wildest prediction will have been proved tame in comparison to reality.

2. The postfight: Smack talk and smoke?

If Diaz, win or lose, is interviewed in the cage after the fight and he doesn’t light up right then and there, well, somebody will have lost what they reasonably had surmised was a sure-thing prop bet.

The more difficult prediction for the postfight moment at the mike, and the more interesting matter, is over what Diaz is going to say. Will he have words of gratitude for the fans who’ve watched him compete 26 times over his 15 years inside the eight-sided cage? Or maybe he’ll see no reason for a goodbye, figuring the fans will follow him to his next venture — which will be what, exactly? Is putting together an MMA fight himself, outside of the UFC, the right move for Diaz? Will he venture into the boxing ring? (Hey, everyone else in sports does.) Start a cannabis brand? (Hey, everyone else in sports does.)

Chimaev will also have his say, of course, if he wins. It’s difficult to envision a scenario in which he wouldn’t call for a title shot, and he would have a strong case. But what could he say to sway UFC matchmakers who one would think are leaning toward former champion Kamaru Usman as Leon Edwards‘ first challenger, after losing his belt to Edwards at UFC 278? So even if Chimaev’s performance in this fight appears to make him a shoo-in for the No. 1 contender spot, he might have to hard-sell himself afterward to draw attention away from the ex-champ.

1. The fight: Will expectations be foiled or fulfilled?

Duh. Of course the actual fight is No. 1 above the pre- and postfight blather, right? Well, on many fight weeks that’d be a no-brainer, but this is one of those fight bookings where the surrounding carnival could steal the spotlight from the fisticuffs themselves. Still, Diaz and Chimaev are, at their essence, fighters more than hucksters. When the cage door closes and these guys get down to business, it will be breathtaking. (So try to remember to breathe.)

With that said, here are a few words about Diaz from a highly respected MMA analyst: “This circumstance … does not have the makings of a good night for Diaz.”

No, that’s not a reference to Chimaev being an 11-1 favorite in this fight, according to Caesars Sportsbook, although the sentiment might well apply.

Those words were written about Diaz in March 2016 in the lead-up to UFC 196, where he was a late-replacement opponent for Conor McGregor. At the time, the Irishman was at the height of his powers, having knocked out the great Jose Aldo in 13 seconds just three months earlier for his 15th straight victory and first UFC championship.

Play for a chance to win a streaming of UFC 280 for FREE! Make Your Picks

The dire forecast for Diaz? I found it in archives of MMA columns written by me — I used “highly respected” up above to throw you off my trail! — but I was not alone in that assessment. For many fight fans, the McGregor matchup had the look of Diaz being set up to be knocked down.

The same is being said about this weekend’s main event matchmaking. Chimaev is dynamic and, by all appearances, unstoppable. But so was the McGregor of 2016 — you know, the guy Diaz choked out in the second round.

So while any computer algorithm into which you feed all of the measurables of Chimaev and Diaz is going to spit out the same calculation, and that calculus is going to favor Chimaev in a big way, you just never know with Diaz. He is going to have his moment on Saturday — he always does — and it is going to make an impact, if only on the heart rate of his fans. In the end, Diaz might not have his hand raised, but he will not be denied his must-see moment.