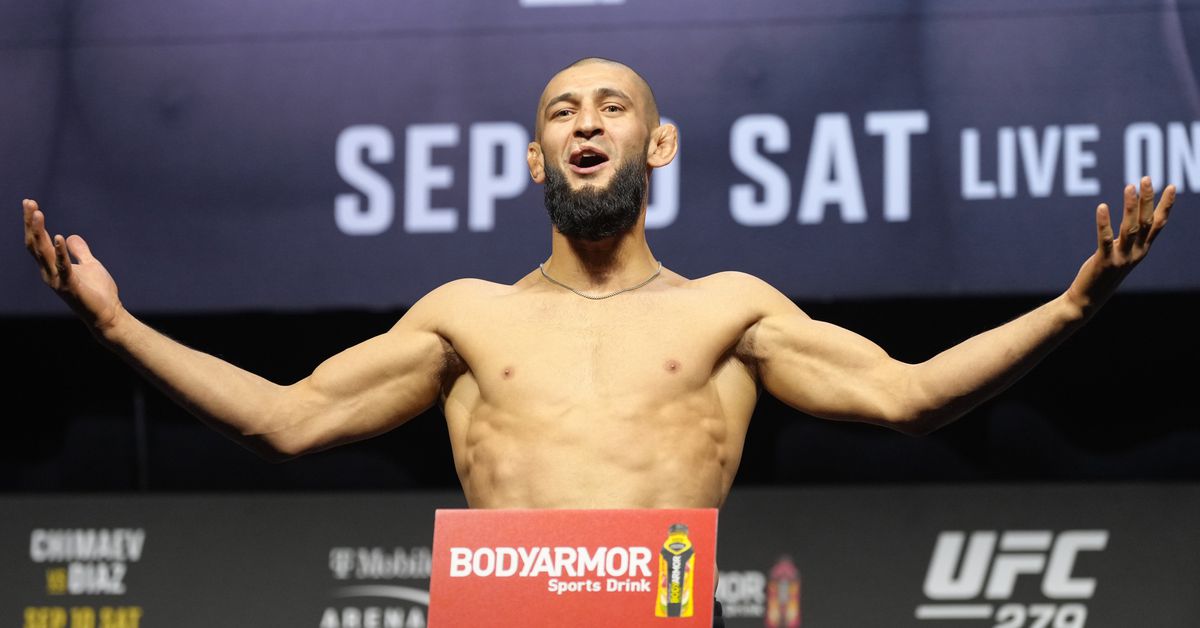 Khamzat Chimaev royally screwed up this morning. The Chechen athlete was handed a layup of a match up against Nate Diaz, an absolute softball to further build his star before an eventual title fight. When he missed weight by an astounding 8.5 pounds, three fights were entirely reshuffled to save the event.

The event got better as a result, but still, that’s one hell of a scale fail.

Such scrambling surely cost UFC a good bit of money in negotiations, and that’s not even considering the canned press conference yesterday. Typically, when a fighter misses weight, there’s a commission instituted fight, at least some of which goes to the opponent. For example, Hakeem Dawodu missed weight by 4.5 pounds today, so the Canadian slugger will fork over 30% of his pay to his opponent, Julian Erosa.

Julian Erosa will receive 30% of Hakeem Dawodu’s purse after he missed weight earlier today. Fight is on.

Generally, that percentage is directly related to the severity of the weight miss. However, despite missing weight by four more pounds than Dawodu, Yahoo Sports’ Kevin Iole reports that Chimaev will face no fine for missing weight. Apparently, Khamzat is off the hook since his opponent swapped in the process of all the chaos … despite the fact that he weighed in intending to make Welterweight?

For those asking, Khamzat wasn’t fined for missing weight. He’s in a new bout at a catchweight and he made that weight. So fines for Dawodu and Barnett because they missed weight and are fighting same opponent. Khamzat is fighting a 180-pound catchweight, so no fine. #UFC279

“For those asking, Khamzat wasn’t fined for missing weight. He’s in a new bout at a catchweight and he made that weight. So fines for Dawodu and Barnett because they missed weight and are fighting same opponent. Khamzat is fighting a 180-pound catchweight, so no fine. #UFC279”

One has to question the Nevada State Athletic Commission (NSAC) policy here. Chimaev was supposed to fight at Welterweight! He missed weight terribly, and his original opponent has to face a different opponent as a result! It’s a mess, but seemingly, it’s a mess Chimaev won’t suffer any financial consequences for causing.

I don’t know how I can possibly include social media content in this section that does not directly relate to the disastrous UFC 279 weigh-ins earlier today. What else is there to talk about other than the all-time, legendary shitstorm that occurred this morning? It is the only topic that matters right now!

So yeah, here’s a whole variety of reactions and snippets from across the web:

Ran into Khamzat Chimaev He was hanging out at a restaurant for hours drinking sparkling water and eating the night before weigh ins and now Khamzat misses weight . I was worried all night about this when I saw it.hope the fight still happens tomorrow . #ufc279 pic.twitter.com/CMrFSxxtxO

The stoner makes weight and the non stoner doesn’t. How about that professionalism by @NateDiaz209

Nate vs Tony is the fight that should have been made all along. This is poetry in motion

So I’ll be out of action for a few months guys, to heal my hand that broke during the fight with Tai. I will use that time to heal some other injuries as well and come back stronger than ever in 2023

I’m coming back for that belt, and I’m not going ANYWHERE pic.twitter.com/V1VvLZtBVk

Charles Rosa thinking Leonardo Santos’ retirement post was a death is also too hilarious not to include.

A huge result from what also looked to be a very fun fight inside Rajadamnern Stadium in Bangkok, Thailand.

Rajadamnern Champion Dani Rodriguez pulls off the upset and beats Thai superstar Yodvicha! The Swiss fighter establishes himself as the best Farang in the sport right now and extends his undefeated record to 35-0. pic.twitter.com/ENiXCmB00L

A beautiful feint to crash forward with the elbow:

In that open stance match up, Saoek kept throwing his right kick over & over his opponent even found a right hook counter to it, but several times, Saoek feinted the kick and shift, drawing the counter and creating space to slice the elbow right between the guard.
Beautiful stuff pic.twitter.com/OPXVJe1Enw

Things are rarely going to get better when the last-ditch exhaustion takedown doesn’t land.

Juggalos in the wild.

He wasn’t the only juggalo walking around with car parts. Someone got caught stealing at the Gathering and he was chased out and his car was destroyed. It’s a fabled incident of “Juggalo Justice”. pic.twitter.com/Xqa3ZAqtYW

The CALL-OUT that started it all! 😬
O’Malley ‘very happy’ with 8-fight UFC extension
Masvidal promotion to feature Roy Jones Jr. bout
Ranking the UFC 284 fights: There’s no debating which fight is No. 1
Lorenz Larkin: Hellacious Bellator 290 knockout felt ‘like redemption,’ testament to teamwork