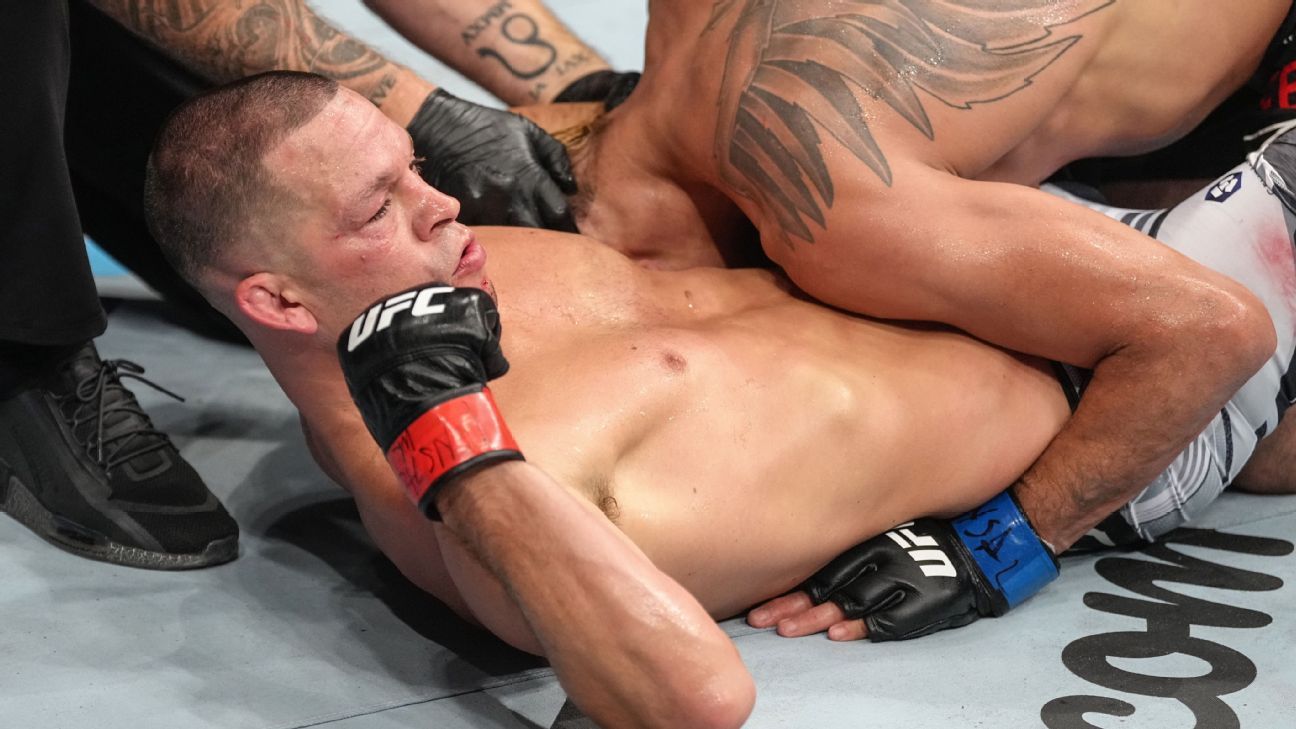 LAS VEGAS — When this week started, Nate Diaz‘s opponent was the dominant rising star Khamzat Chimaev — a little parting gift from the UFC as Diaz heads out the door.

On Saturday night, with Tony Ferguson as the opponent after a bizarre, unprecedented several days, Diaz will leave the promotion as a winner, courtesy of a guillotine choke submission at 2 minutes, 52 seconds of the fourth round in the main event of UFC 279 at T-Mobile Arena. And with that, the lore of Diaz — one of the most popular, unconventional fighters in MMA history — continues.

“I told them, ‘Give me anybody you got,'” Diaz said in his postfight iterview. “At least I got a worthy OG representative of mixed martial arts.”

Diaz was originally supposed to fight Chimaev, but Chimaev missed weight by 7.5 pounds Friday, coming in at 178.5 for a 171-pound-limit bout. Diaz understandably opted not to fight an opponent who was so overweight. Diaz called Chimaev a “b—- ass rookie” and said he only trained wrestling during this camp, because Chimaev is a dominant wrestler.

Chimaev missing weight caused a chain reaction with the UFC attempting to save the pay-per-view card. For most of the day Friday, promotion brass, including chief business officer Hunter Campbell and UFC president Dana White, worked to alter the top three fights. Ferguson agreed to fight Diaz in a five-round fight.

This was the final fight on Diaz’s UFC contract and he has indicated that he will not return to the promotion at this point. Earlier this week, Diaz’s team announced Diaz would be starting his own combat sports promotion, Real Fight Inc. Diaz has been in the UFC since 2007 and is an 18-year pro in mixed martial arts.

“I want to get out of the UFC for a minute and show all these UFC fighters how to take over and own another sport how you’re supposed to do it,” Diaz said, adding he meant boxing, kickboxing and Brazilian jiu-jitsu. “Conor McGregor didn’t know how to do it. None of these other fighters know how to do it. I’m gonna take over another profession and become the best at that.”

“Right the f— back here to get another UFC title,” Diaz said.

Ferguson was scheduled to fight Li Jingliang, who was shifted to a fight with Daniel Rodriguez. Chimaev, meanwhile, took on Kevin Holland in the co-main event.

Diaz (21-13) is a cult favorite who reached superstardom with a 2016 submission win over Conor McGregor. The California native is 2-2 in his last four fights, but nearly knocked out Leon Edwards — who is now the UFC welterweight champion — in his previous fight in June 2021.

Ferguson (25-8) has dropped five in a row, most recently a knockout loss to Michael Chandler at UFC 274 in May. The California native is a former UFC interim lightweight champion. Ferguson, 38, won 12 straight fights from 2013 to 2019, tied for the UFC lightweight record streak with Khabib Nurmagomedov.