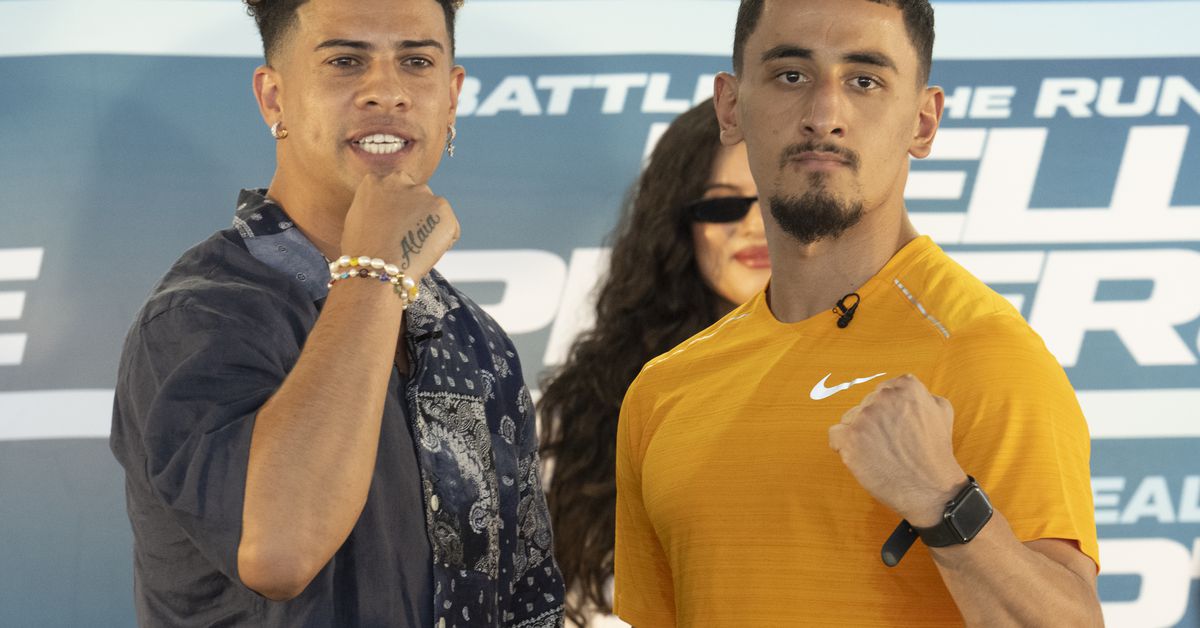 We’ve got social media and reality television stars doing combat sports once again tonight (Sat., Sept. 10, 2022) as Austin McBroom and Aneson Gib finally throw down inside Banc of California Stadium in Los Angeles, Calif., after months and months of trash talk. The FITE.tv-streamed pay-per-view (PPV) show will also feature professional athletes trying a different sport than they used to do, with a “Battle of the Running Backs” between former Minnesota Vikings (and six other teams) rusher and potential Hall of Famer, Adrian Peterson, clashes with fellow retired former ball carrier, LeVeon Bell, of the Pittsburgh Steelers (among others).

Indeed, fists will fly and the crowd will be stocked full of fans of YouTube, TikTok, NBA and NFL crossover fans take in “social gloves” boxing!

In the co-main, from the NBA, we’ve got “Swaggy P” himself, Mr. Nick Young — famously of the Washington Wizards and Los Angeles Lakers — taking on rapper Jonathan Michael Porter (a.k.a. Blueface). Astute followers of combat sports might actually remember that last gentleman because he appeared on the undercard of BKFC 19: “Ostovich vs. VanZant” in a gloved amateur bout (he won a unanimous decision). Cancel that. Stepping in on late notice replacement is another rapper, a gentleman by the name of Malcolm Minikon.

Moving on past the sports stars, we’ve got reality television stars Cory Wharton and Chase Demoor, who you may remember from the scuffle posted in last night’s Midnight Mania.

Enough talk … let’s get down to brass tacks:

Round 1: Minikon in black, Young in white. Both men exchange rights. Young mostly circling, looking to counter. Young hits a straight right. A hook, too.

10-9 Young in this exhibition rules (no scoring) match.

Round 2: Huge exchange here that knocks the mouthpiece out of Minikon. Minikon got in a shot there, too, but ate about two or three good shots and staggered back. There’s a clean right from Minikon. “Swaggy P” with a quick left that lands flush.

Round 3: Young with a left and an uppercut. Young complaining about a shot to the back of the head. Replays show he did take one in a clinch. Good left by Young. Young has his hands down at his waist and darts forward with a left. He’s done that a couple times now to good effect.

Round 4: Same left from Young again. What just happened here? Young flies out of the ring as the ref called time. Looks like there was a clash of heads for a second? Oof, the ref is stopping it. Replays show that he just got raked across the face by a forearm and this isn’t the greatest look for Young here.

Round 1: Bell in white, Peterson in black. Bell opens up with a jab to the body. Another. Peterson just clips one back. Bell keeps going to the body, which is kind of nice to see from amateurs. AP just misses a right.

10-9 Bell, although no official scoring in this exhibition

Round 2: A pistoning jab sits Bell down, but the ref doesn’t count, so perhaps there was a foot entanglement the camera missed? Body jab by Peterson. Replay after the round ends shows that was a clean jab and should probably have been called a knockdown.

Round 3: Lead left by Bell. Right to the bread basket. Jab by AP. Bell looking a little slick here.

Round 4: Peterson hasn’t had success with anything other than that jab, and he doubles up on it. Bell clubs a right, but gets mostly shoulder. Bell tries an overhand, misses.

Round 5: HUGE RIGHT HAND PLANTS ADRIAN PETERSON! AP gets up, but he looks wobbly, and given this is an exhibition, the ref ain’t having any of it.

Round 1: McBroom in blue, Saleh in gray. They clash heads a bit on the first rush together. McBroom with a quick jab. Saleh circling, not throwing much. There he goes with a 3-punch combo, but doesn’t really land any.

Round 2: Saleh to the body. Again. Ref warning about headbutts. McBroom backs Saleh into the corner and he’s firing. Seven some-odd punches, most of which missed, but still one-way traffic. Saleh gets an overhand in. Right by McBroom.

Round 3: No real clean lands from either man here. Saleh is backing up and clinching whenever McBroom closes ground. There’s a counter left and a right from Saleh. Finally a clean one from Saleh lands.

Round 4: Saleh comes forward and gets in a left. McBroom with one. Nice right hand catches Saleh ducking. 1-2 misses for McBroom. Clean counter right gets in from McBroom.

Round 1: Demoor in white, Wharton in black. Wharton ducking low and firing heavy from the start. Demoor doesn’t look comfortable with his mouthpiece. Right hand from Demoor and Wharton takes a knee, but it’s ruled a slip. Left by Wharton.

There’s no official scoring, but I’m gonna give that to Demoor 10-9

Round 2: Wharton coming out fired up, but not landing any of these big shots. Finally lands a left. Another. They stand still for a few seconds just taunting each other. Demoor hits a left.

Round 3: Demoor lands a counter right. Malignaggi and Garcia are trashing Demoor’s skill level here, and while I don’t blame em, he’s still being kind of effective here because Wharton isn’t able to find his range. He does get in a right-left as the bell rings

Round 4: Demoor with a quick jab. Demoor chasing Wharton down a little now. Lands a right. 1-2. All the pep has left the step of Wharton here.

Round 5: Demoor the aggressor here and Wharton has to sprint out of danger. Little taunting and finally a left lands for Wharton.

10-9 Demoor on my unofficial scoring, even though there’s none for this exhibition.

For more on “McBroom vs. Gib” and other boxing-related events, click here.