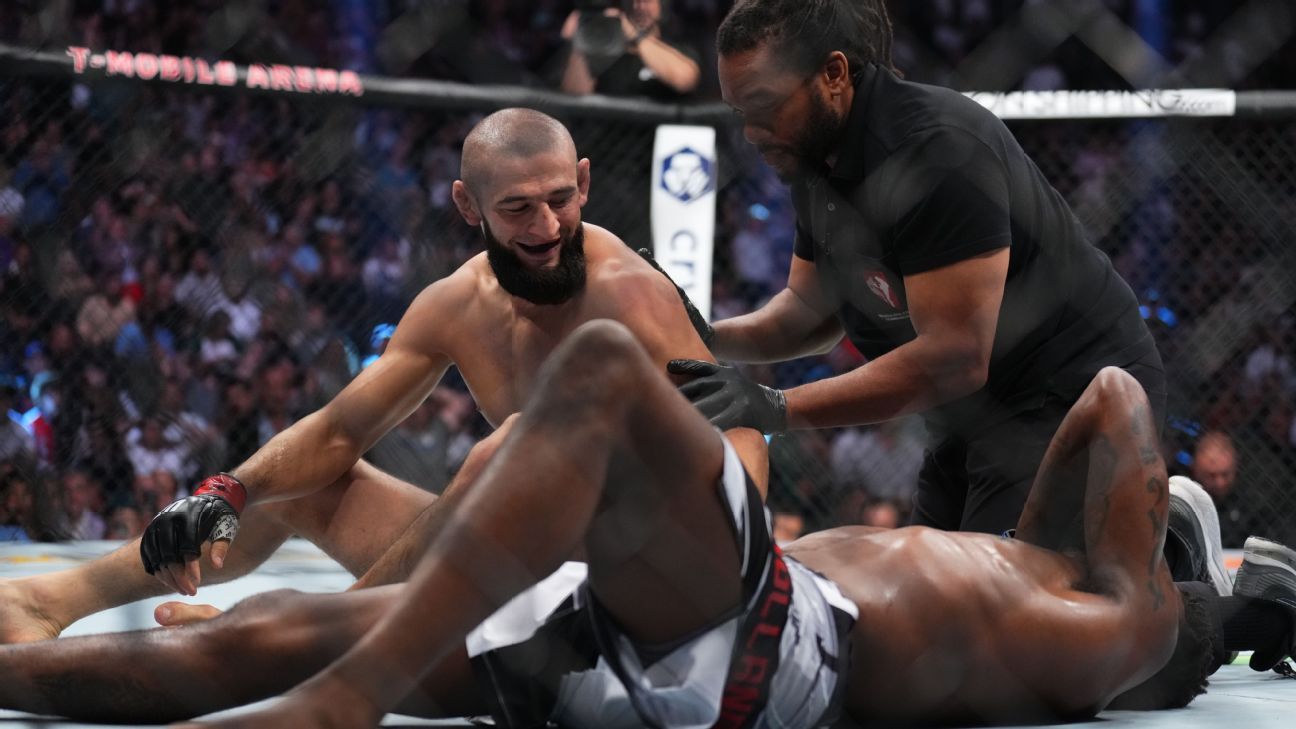 LAS VEGAS — Khamzat Chimaev missed a major opportunity to take out one of the biggest stars in MMA history Saturday, but he picked up an easy victory at UFC 279.

Chimaev (12-0) submitted Kevin Holland (23-8) with a D’Arce choke at 2:13 of the opening round inside T-Mobile Arena. It was a dominant performance by Chimaev, but it came one day after he missed weight for a scheduled welterweight main event against Nate Diaz.

After Chimaev missed weight by 7.5 pounds, Diaz refused to fight him at a catchweight, which forced the UFC to shuffle the card and schedule Chimaev against Holland at 180 pounds.

“Say what now!” Chimaev yelled in the Octagon as boos rained down from the crowd. “Say something! I’m the most dangerous guy here. I’m coming for everyone. I’ll kill everybody.”

Born in Chechnya and now fighting out of Sweden, Chimaev is one of the fastest-rising stars in UFC history. He signed with the promotion in 2020 during the COVID-19 pandemic and picked up two wins in just 10 days, setting a UFC record. He is already in discussion for a welterweight title shot, and has talked about plans to win belts at 170, 185 and 205 pounds.

He looked perfect inside the Octagon on Saturday, as he shot straight into a takedown in the fight’s opening seconds and took Holland to the floor. Holland has a history of issues with takedown defense, but he came into this matchup on a two-fight win streak at welterweight. He was originally scheduled to face Daniel Rodriguez in a 180-pound catchweight. Rodriguez, of California, is primarily a striker, not a wrestler.

Things went from bad to worse for Holland as the fight progressed. He tried to scramble and separate, but once Chimaev had a grip on him he wasn’t letting go. He transitioned into the D’Arce attempt in the center of the cage and produced the tap. He has now finished five of the six opponents he has fought in the UFC, including four inside the first round.

Chimaev, 28, started his weight cut late Thursday evening, sources told ESPN, but physicians stopped it around 4 a.m. PT because of medical concerns. Chimaev, who has competed at both 170 and 185 in the UFC, said he could have kept cutting weight but doctors wouldn’t let him. The UFC was quickly informed and went to work refiguring the card Friday morning.

The conclusion was a disappointing one for Holland and brought a swift end to a mini-rivalry with Chimaev. The two got into a brief scuffle earlier in the week, prior to a UFC 279 news conference in Las Vegas. No injuries occurred but the UFC ultimately chose to cancel the conference over safety concerns after Diaz’s team also became involved in the fracas.

Holland, of Fort Worth, Texas, falls to 7-3 overall in the UFC.

Jon Jones WARNS heavyweight and asks him to STOP WRITING HIM, Israel Adesanya reacts to critics
Jan Blachowicz is grateful for the title shot 🙏
No Bets Barred: Best bets for the heavyweight doubleheader with Bellator 290 and UFC Vegas 68
Fedor Emeilianenko has no regrets not fighting for UFC, recalls only meeting with Dana White
Matt Brown sends warning to Jake Paul: ‘When you’re fighting MMA fighters, you’re in a world of f****** savages’