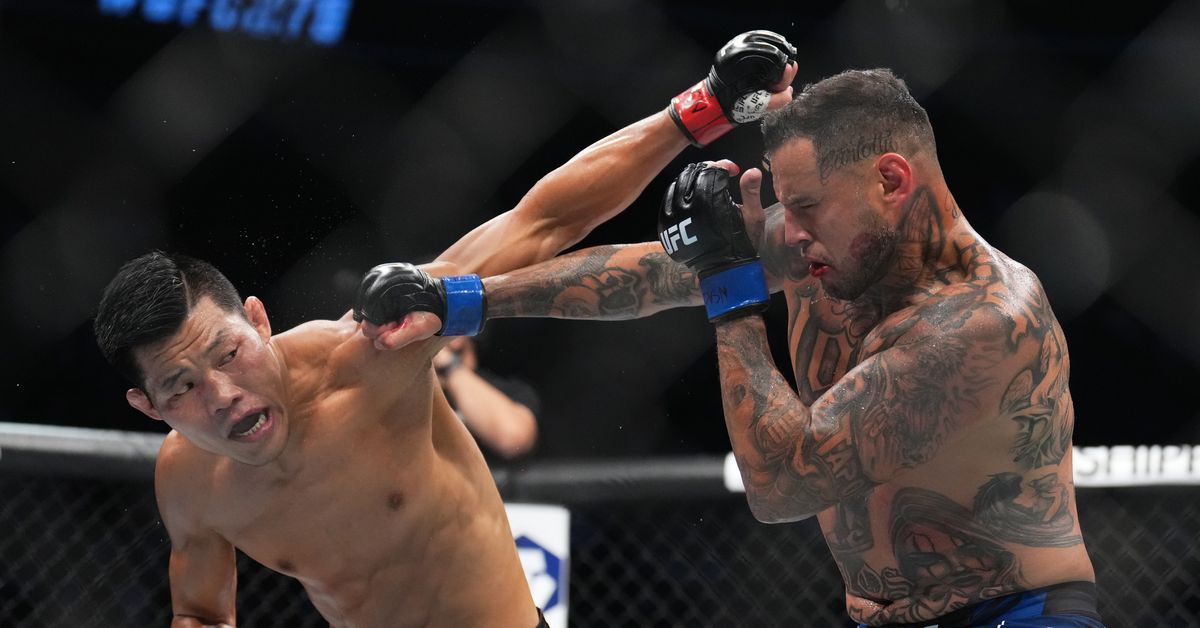 Few things infuriate MMA fans more than a fight being scored incorrectly, though the term “robbery” tends to be thrown around carelessly and is often steeped in bias. With Robbery Review, we’ll take a look back at controversial fights and determine whether the judges were rightly criticized for their decision or if pundits need to examine their own knee-jerk reactions

“The Leech” was originally set to fight UFC legend Tony Ferguson in this past Saturday’s co-main event, but lost both his opponent and his spot on the card due to a lineup shuffle caused by Khamzat Chimaev’s weight-cutting negligence. Before that, Li missed out on the opportunity to show off a fine new suit and speak to fans and media at a Thursday press conference that was canceled because Chimaev’s and Nate Diaz’s teams were involved in a backstage altercation.

Then Li stepped into the cage to face Daniel Rodriguez, a fellow welterweight contender who entered the bout with a huge weight advantage after initially weighing in for a 180-pound catchweight bout. And then Li lost a razor-close fight.

Several of Li’s peers immediately chimed in on his behalf to protest the judges’ decision.

How tf did Rodriguez win that fight?

Li himself appears to be taking the loss in stride, but for his sake and the many fans who felt that he won he fight, we are obligated to take this one to the Robbery Review lab for a closer look.

What was the official result?

How did the fight go?

Normally we’re able to focus on a round or a key moment in a fight to help us figure out why a verdict is controversial, but as you’ll see from the scorecards in the next section, every round in this fight was a toss-up according to the judges so we’re going to have to dig in deep here.

One broad note we can make is that Li was the busier-looking fighter through all three rounds. The movement and pace he utilized to deal with the larger Rodriguez was truly impressive and his sheer activity could have been an important factor for anyone scoring the fight.

Rodriguez got his offense going first in Round 1, wading through Li low kicks to land a few clean punches to the head. Li was doing well with his kicks, but his punches were falling short, which wasn’t surprising given Rodriguez’s excellent jab. It took half a round for Li to land his first solid combination, a clean 1-2 that backed Rodriguez up. About 45 seconds later, there was another good 1-2 by Li and you start to see how narrow the gap is between these two. Rodriguez kept the jab going, not looking to bite on Li’s numerous feints, then he took advantage of a sloppy kick from Li by cracking him with a left across the jaw, possibly the best strike of the round. A low kick tripped Rodriguez up, but otherwise he was unharmed as he sprang back to his feet.

Heading into Round 2, you can see how Li’s athleticism might give Rodriguez problems, but it was actually Rodriguez who held the center of the octagon for the most part. They exchanged glancing punches early and Li started to get adventurous, throwing with power with mixed results. Rodriguez stuck with a steady diet of jabs and counter rights, as well as low kicks that were matched by Li. More punches from Li fell just short despite his best efforts. Li connected with a nice low kick, but then ate a hard jab on a Superman punch attempt. Huge moment for Li with a minute remaining as he caught Rodriguez with a fast left followed by a hammer right.

Li had good counter work going early in Round 3, though neither fighter landed with much impact in the opening exchange. Rodriguez caught Li coming in with another counter. Li’s aggression started to work against him as Rodriguez clipped him with a 1-2. They traded leg kicks before Rodriguez went back to the jab. Li was still looking to land big shots, but with the benefit of replay it’s easy to see that few of those shots landed outside of the occasional looping right. Rodriguez continued to land jab after jab, a reliable weapon throughout the fight.

What did the judges say?

What did the numbers say?

Looking at the official stats only further muddies up the waters.

No knockdowns were scored in the fight.

Li was credited with a takedown in Round 1 that led to zero offense.

What did the media say?

The media was nearly unanimous in scoring the fight for Li, with 20 of 23 scores submitted to MMA Decisions in favor of “The Leech.”

Two media members (including the esteemed Jed Meshew) had it 29-28 for Rodriguez, while MMA Mania’s Drake Riggs had it 30-27 Li.

What did the people say?

Voters on the Verdict MMA app scored the fight for Li by a wide margin.

That scoring system takes the cumulative total of every submitted fan score (filtering out aberrant scores like random 10-7s if they comprise less than one percent of the total) in every round and divides by the amount of submitted scores to determine the winner of each round and also in totality.

Verdict scorers gave every round to Li, the first two by over 50 points. That led to a final margin of victory of 142 points for Li, well over the threshold of 100 that I consider to be indicative of a convincing win according to the Verdict scoring system.

How did I score it?

First of all, for the fans in attendance booing that fight, stop being ridiculous. I guess we’re just not enjoying high-level, tactical striking these days?

Secondly, I scored this one for Rodriguez in the moment, so I had a bias going into this review.

Getting granular with it, I noticed (with the benefit of multiple replays) that several of Li’s power shots that had Rodriguez off-balance didn’t actually connect, though I imagine it’s these moments that played well for Li in the eyes of the live viewer. Several exchanges happened in a flash and were easy to miss. However, there’s no doubt in my mind that Rodriguez consistently landed better head shots and there’s no case to be made that Li won that aspect of the fight.

So I’m standing by my 29-28 score for Rodriguez, with Round 3 being his best frame and the first two being incredibly difficult to score.

Was it a robbery?

I’m convinced that much of the support for Li is the result of people wanting to see Li win after he soldiered through last week like a champ, but I’m not a mind reader so I’ll just say that I personally wanted to see Li win after everything he had to put up with. So I understand how one would want to see him rewarded not just for being a company man, but for putting on a strong performance against a bigger fighter and a tough stylistic matchup.

It also doesn’t help that Rodriguez was at his most methodical, which didn’t necessarily make for a barnburner, though keep in mind that neither fighter trained for the other so they were essentially figuring it out on the fly out there. Fans were not given the best of Rodriguez nor Li and the fighters still delivered an entertaining and competitive contest.

Competitive is the key word in this Robbery Review discussion, because this was unquestionably a back-and-forth fight where both fighters had their moments without either convincingly pulling away. If you thought Rodriguez’s jab defused Li, fine; if you thought Li earned the nod with his timely aggression, that’s fine too.

Here’s the point: It doesn’t matter if you scored it for Rodriguez or Li. If you think either man clearly won this fight, you’re either a liar or you don’t know what you’re watching.

Was Daniel Rodriguez’s win over Li Jingliang a robbery?