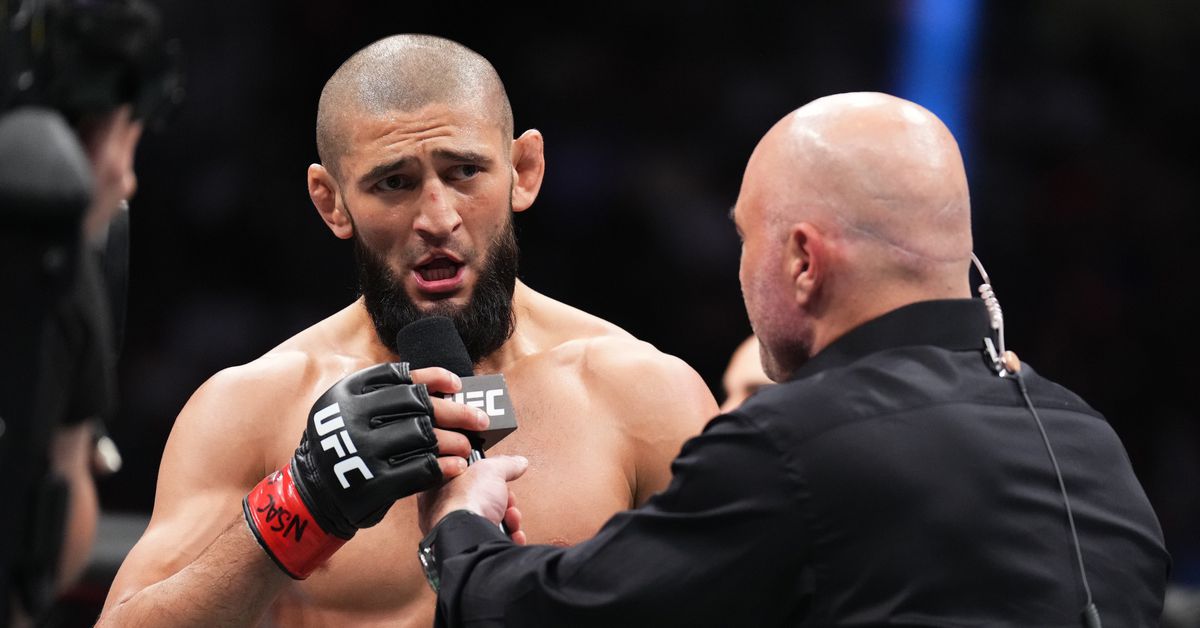 It’s no secret that Khamzat Chimaev cuts a fair bit of weight to make the Welterweight limit. Videos have previously been posted of the Chechen athlete suffering to shed the pounds, and it’s very visually obvious that he’s massive for 170 lbs. While technique is certainly part of the equation, Chimaev’s size and strength certainly haven’t been hurting his ability to overpower and dominate the competition.

Chimaev may have picked up yet another flawless victory in his first-round submission win over Kevin Holland (HIGHLIGHTS) at UFC 279, but the question remains: what went so terribly wrong in this weight cut? Repeatedly, Chimaev and the promotion have offered up the narrative that “Borz” could have made the weight if only a doctor had not interfered and stopped him from continuing. Chimaev reiterated as much in the post-fight interview, promising that he could’ve made the Welterweight limit without issue if allowed to try.

On The MMA Hour, Chimaev’s coach Andreas Michael tells a different story. He offers up no such excuses, explaining that a heavy start to Chimaev’s camp and timing issues helped doom “Borz” long before fight week.

“We started this camp heavy,” Michael explained (via MMA Fighting). “That’s what the problem was as well. We got an offer to fight Nate Diaz, and it was earlier than this in August. It was too soon because he was heavy. Then they moved it 10 days up, and I believe we just started too heavy this camp. We should have had a little more discipline and held our weight to a reasonable level, to a reasonable weight close to the one that he’s training at and going into camp. That’s basically about it.

“We can find a lot of reasons and excuses and all this. At the end of the day — I’m not slagging off Khamzat, he’s a magnificent fighter and I love him to death — but what I’m saying is that it was absolutely unprofessional from our side not to make weight. Anyone who doesn’t make weight is unprofessional, absolutely. I want to [apologize] to Nate’s camp for that. We should have both made weight, and there are no excuses.”

Finally, Michael elaborated on the rough condition that Chimaev was in the night before the Friday weigh-ins. Chimaev wasn’t suffering mere cramps; his symptoms were far more concerning.

“He was getting muscle spasms, shaking,” Michael said. “Vomiting. When he stood up he was passing out. I was worried about him.”

Afterward, Michael brought in the physician, spoke him him, and then decided it was time to call off the weight cut. While missing weight may not be great for Chimaev’s reputation or status as a Welterweight contender, it’s far better than some of the alternatives that can come with pushing a weight cut too far, like kidney issues or even death.

Chimaev has plenty of potential to be champion at 185 lbs., so perhaps it’s best if he competes at Middleweight moving forward.

I’m not trying to claim Tony Ferguson vs. Nate Diaz was the best fight of all time, but I dug it, and it was cool to see those two set aside their typically antagonistic natures.

Also, I’ll answer this: Diaz’s leg hurt, so he wanted a break, and Tony gave him one (he shouldn’t have).

WEST SIDE! Is Paulo Costa vs. Khamzat Chimaev next?

Hasbulla isn’t fighting, but he still secured the bag in the form of a five-year contract helping promote UFC.

I’ve talked about my training partner and good buddy, Allan Begosso, a couple times in this column in the past, notably when he knocks someone senseless. Great guy, be sure to tune in tomorrow to “Contenders Series” and watch him win a contract!

Sometimes a low kick spins you around, it happens, but you can’t stay there!

Notice how Mendez’s takedown attempt was going swimmingly until the exact point where his knees touched the ground?

An incredible landscape in Switzerland: