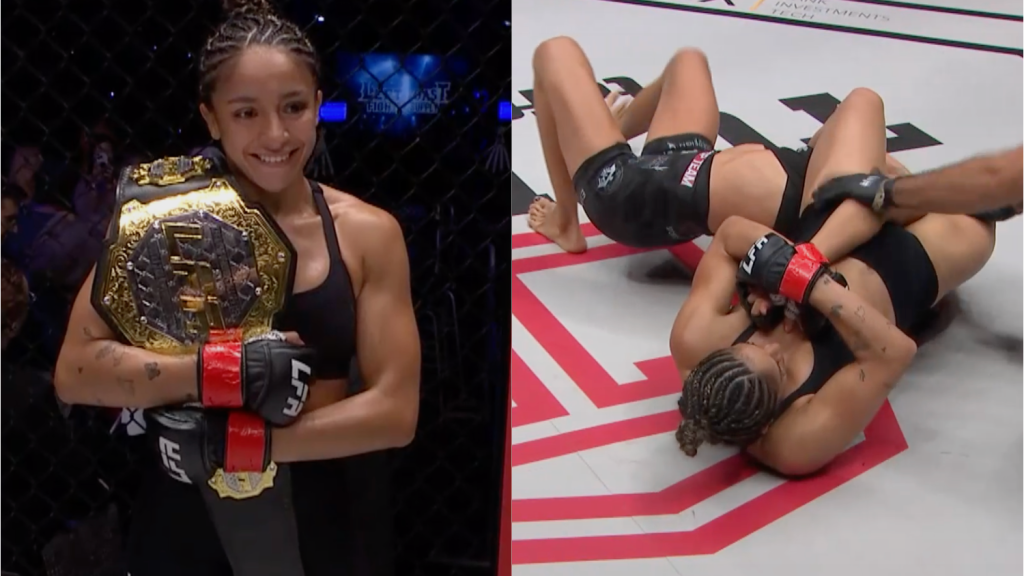 Jaqueline Amorim brought quite the grappling resume into her journey down the road of professional MMA fighter – and in the LFA 142 main event, it was once again on display.

The LFA women’s strawweight champion, Amorim (6-0) successfully defended her title for the first time when she methodically took down, controlled, mounted, and armbarred opponent Ashley Nichols (4-4) for the quick submission. The stoppage came at 4:39 of Round 1.

Amorim, 27, is a Brazilian jiu-jitsu black belts with IBJJF, UAEJJF, and CBJJ championships to her name. Since her transition to MMA in late 2020, she made the jump to train at American Top Team in Coconut Creek, Fla. – with the particular intent of rounding out her game.

In the early minutes of the opening round, Amorim showed her striking improvements. She picked apart Nichols, a kickboxing-based fighter, before a well-timed shot took the fight to the canvas.

Once on the mat, Amorim did not let Nichols get comfortable. Amorim constantly worked and transitioned. As soon as she got to mount she grabbed hold of the arm and that was it.

With the victory, Amorim keeps her first-round finishing rate perfect at 100 percent. Through six fights she is unbeaten with five submissions and one knockout.

Prior to LFA 142, Amorim turned down a Dana White’s Contender Series opportunity and even in her post-fight interview Friday was noncommittal to her next move.

The full LFA 142 pro results include: