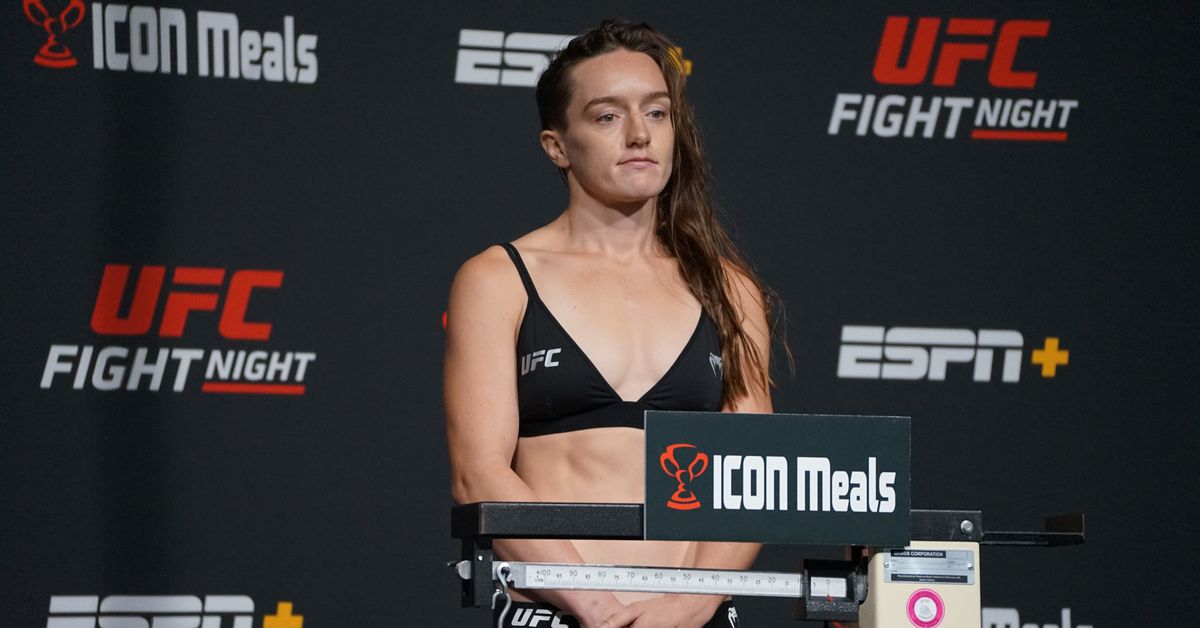 It is not at all surprising that Aspen Ladd missed weight earlier this afternoon. She’s missed the Bantamweight limit twice previously, and one of her recent bouts took place at Featherweight due to the struggle of making weight. Hell, she’s banned from trying to make 135 pounds in her home state of California after packing on too much weight in 2019 after hitting the Bantamweight limit successfully.

It’s just not a shock at this point. It’s unclear why UFC continues to offer her fights at Bantamweight given her long history of struggles to safely make weight, but it’s going to become more difficult to find opponents willing to sign the dotted line. After all, they’re facing a significant chance of the fight getting cancelled or facing a disadvantage on fight night.

Sara McMann, Ladd’s would-be opponent at UFC Vegas 60, took to Instagram to offer her thoughts. The Olympian isn’t impressed, and she compared missing weight to cheating.

What to even say… I’m really disappointed that things went the way they did. I’ve never once missed weight in my career in wrestling or fighting. Missing weight is the equivalent of cheating. You gain such an advantage for every pound that you don’t have to cut. I wish that the promotions and commissions would change the policies so this isn’t even an option at this professional level. That being said, the @ufc took very good care of me for coming in and doing my job like always. I wish I had been able to compete and show the hard work and growth I’ve made since the last fight. I’ll keep sharpening the ax and do some BJJ tournaments in the meantime until my next fight is scheduled. Thanks for everyone who has reached out, you’re the best!!

Miesha Tate, who has beefed with Ladd publicly quite a bit, chimed in, “Agreed!” in response. Ultimately, it remains unclear what is next for Ladd, and whether or not the Top 10-ranked Bantamweight will even be allowed to make an attempt at 135-pounds in the future.

Terrance McKinney’s take on the Ladd scale fail also made me chuckle.

Let’s play a game called, “Is this a real tweet or Ali Abdelaziz?” Discuss in the comments.

I just think Charles Oliveira will not show up in Abu Dhabi and the UFC will replace Charles with Beneil Dariush.

Regardless of who the opponent will be, @MAKHACHEVMMA is on his way to becoming the best in the world #ufc280

Jordan Wright is very kill or be killed, whereas Dusko Todorovic tends to be rather methodical, which makes for an interesting style clash.

Jordan Wright vs. Dusko Todorovic is booked for the upcoming UFC card on Oct. 15, per sources confirmed to myself and @guicruzzz

Tony Ferguson got the huge hole in his shin stitched up.

Paulo Costa once again calls for a fight with Khamzat Chimaev — think UFC goes for it?

A 36-second clip of a phonebooth fight, yet not a single elbow was thrown — why bother?

This is peak regional Heavyweight MMA. I’m pretty sure the referee briefly gave him a time out before calling the fight too!

In a super-heavyweight contest, Alexandru Lungu defeats Florin Danila via first round TKO, when Danila pulls a muscle after constantly throwing spinning shit. Lungu did not land a single punch #Heroes5 pic.twitter.com/HPKNxvp8DC

Nate Diaz has been convincing opponents to shoot into guillotine chokes for over a decade.

A shrimp changes its skin.