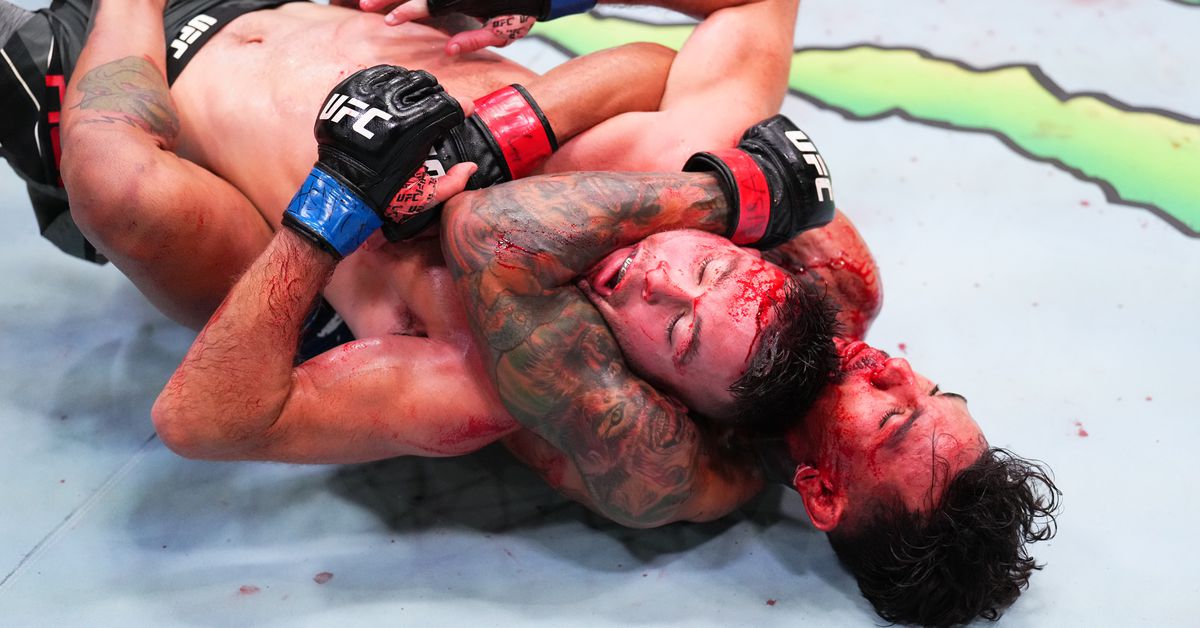 Andre Fili had a unique post-fight experience after UFC Vegas 60.

The 32-year-old featherweight took a hard-fought split decision over Bill Algeo on Saturday, edging out the win after 15 minutes of bloody and back-and-forth action. But it wasn’t until the bout ended that Fili fully grasped the extent of the damage he inflicted on his foe.

“The amount of blood that he dripped into the side of my ear surprised me. That was f****** surprising,” Fili said in his post-fight press conference. “I had like a legitimate minute-and-a-half after the fight where I couldn’t hear anything. It felt like I dove into a pool. Like, there was so much of his blood in my ear that I couldn’t hear anything out of my left ear, and it took me like a minute-and-a-half, two minutes to get it out — and this big blood clot fell out of my ear. And none of it was my blood. That’s why you should stay in school, kids.”

Algeo also suffered an injured arm in the bout, however the severity is currently unknown.

But Fili’s post-fight hearing loss wasn’t the only surprise that greeted “Touchy” once his three rounds with Algeo were up. Fili was also stunned to learn that judge Chris Lee scored the bout 29-28 in Algeo’s favor, having given Algeo the third round despite Fili spending the majority of the round on the cusp of ending the fight with a tight rear-naked choke.

“I don’t think it was a split decision, I think I clearly won that fight. It was competitive, but I don’t f****** know what these judges are looking at, man,” Fili said. “I thank God they didn’t rob me, but dude, they’ve got to stop trying to scare me.

“What is a more significant threat to finishing a fight: My hand under his throat ready to strangle him, or him punching me on the top of my forehead from two inches away? And if a judge legitimately looks at that and says that he was closer the fight than me in that third round, f*** that guy. Like, I don’t know what else to say. I wish I had a more eloquent thing to say, but if you think that punches from [close range] is a more legitimate fight-ending threat than a rear-naked choke from the back, you shouldn’t be judging fighting.

“Thank God they got it right,” Fili continued, “but I think that we’ve really got to have some accountability with these judges, man, and have some better calls.”

Fortunately, controversy was avoided for Fili.

The much-needed win was Fili’s first since 2020 and snapped a three-fight slump.

It also served as an emotional release for Fili, as the fighter revealed in his post-fight interview that he and his partner suffered a miscarriage of what would’ve been their first child in the lead-up to UFC Vegas 60.