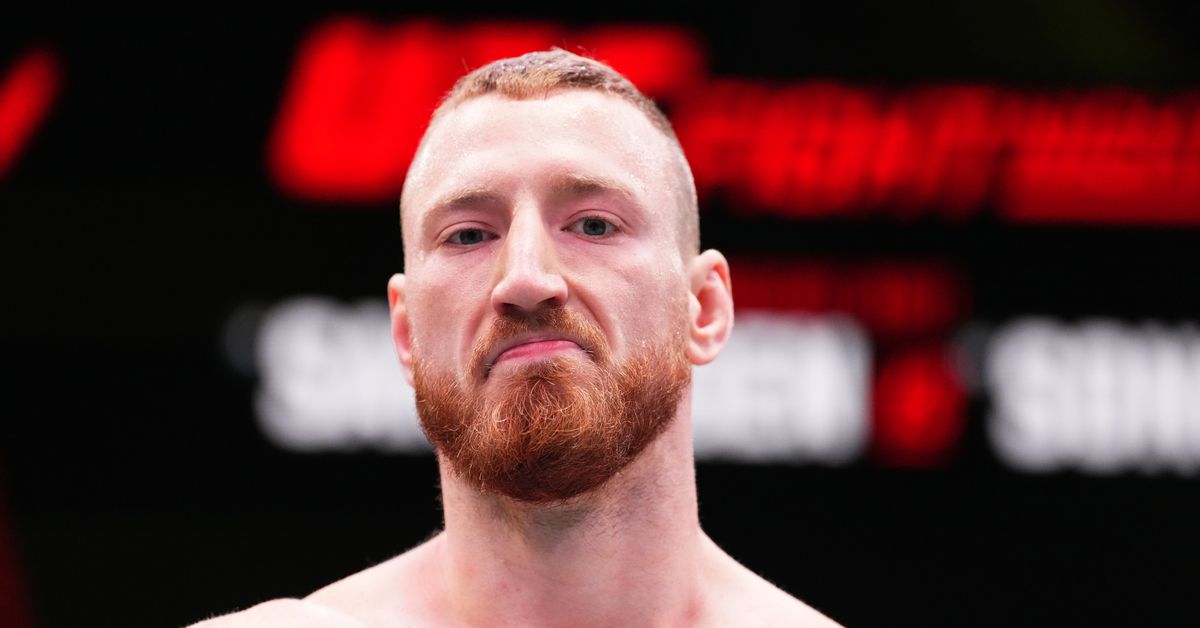 The road to this past weekend’s UFC debut was anything but easy for Joe Pyfer.

A 26-year-old middleweight prospect, Pyfer introduced himself in thunderous fashion with a first-round knockout of Alen Amedovski at UFC Vegas 60. To call the moment long in the making would be an understatement. In 2020, Pyfer was on the precipice of achieving his UFC dreams when he suffered a grisly arm injury in the opening minutes of his Contender Series bout against Dustin Stoltzfus. Not only did the injury delay Pyfer’s goals and sideline him for more than a year, it also ravaged his mental health in ways he never expected.

“I got built from breaking my arm, honestly,” Pyfer said Monday on The MMA Hour. “I hit the slumps, man. I hit a depression, like temporary suicide s***, you know, feeling sorry for myself. I allowed what I thought was a failure to really break me as a person and like, ‘Maybe people are right, I’m not meant to do this.’ I don’t know. I used to ask myself these questions all the time, like, ‘Why me? Why me? Why me?’ The self pity, that’s really what it is, and it was.”

Though he was distraught, Pyfer used the setback as motivation to fuel his comeback. He went back to the regional scene in Dec. 2021 and picked up a devastating knockout of Austin Trotman at a CFFC show, then found himself returning at the scene of his misfortune in July: Back in the Contender Series gym, matched up against Ozzy Diaz in a make-or-break second chance to impress UFC president Dana White and the promotion’s matchmakers.

Despite ongoing turmoil in his personal life, Pyfer shined. He won the only UFC contract of his Contender Series week with a highlight-reel stoppage of Diaz, then proved the performance was no fluke with his success against Amedovski this past Saturday.

“I’d been in the game for, what, 21 years or whatever it’s been, I started jiu-jitsu at four-and-a-half years old, ran away from home, that whole nine yards with that,” Pyfer said. “And I get a second shot back, I have my friend just try to kill himself in my house two different times — one week before [the fight], three weeks before — and a whole lot of other stuff going on, man. And it was super hard mentally to keep it together. But what I did learn is, I would never take a flight unless I was mentally prepared — and I was mentally prepared, man.

“I chose myself for once, and that’s something I hadn’t done in the past. I would let everybody else’s s*** get in the way. But I know how bad I wanted this, I know how hard I worked for this.”

In a way, the result shouldn’t have been a surprise, because overcoming adversity has always been a hallmark of Pyfer’s journey through life.

In an intimate and revealing conversation on The MMA Hour, Pyfer spoke extensively about his troubled childhood and struggles within his family. He said his father was deeply abusive from the time he was one year old, both verbally and physically, to the point where Pyfer had no choice but to flee home before he even graduated from high school.

“I’m not going go into detail of that to that extent, but basically I shoved him, ran out of the house, never went back. And I’ve been discredited from that moment by him ever since then,” Pyfer said of his father. “Laughed at, made fun of, told I was going to be a f****** loser my entire life, man. And it’s very common, there’s a lot of gruesome things that were said.

“But you know what? When I ran away from home, I had no means to go and train MMA anymore because my dad never let me get my my state ID to get my license, he would never let me drive. I had zero opportunity living with either my parents. And so I joined the wrestling team, man — and I graduated high school, I think I met my savior in life, which was my high-school wrestling coach Will Harmon. With all my heart, I can say that I probably would’ve called it quits if I didn’t meet that man and join that wrestling team.”

Pyfer said his relationship with his mother was no different. He said the last time he spoke to her was three years ago and called the relationship “toxic” and “dysfunctional.”

“[When it comes from your mother,] it hurts a lot more than your father,” Pyfer said. “I don’t know why. I guess it’s the emotions that you’re supposed to have with your mom. And yeah, my mom despised me because I was spitting image of my dad. We were very dysfunctional, very verbally abusive, very put down type people. … They’re not good people.”

Because of his difficult upbringing, Pyfer said he “felt like a f****** freak” most of his life. He said he still speaks to father on occasion, but the relationship is not a healthy one.

But with his UFC dreams finally coming true and his spot on the roster secure after UFC Vegas 60, Pyfer said he’s happier and in a healthier mental place than he’s ever been in his entire life. And he knows Saturday’s debut was only the beginning of things to come.

“I’m just thankful, man. Like, I’m afraid to die, and I’ve convinced myself that this life is very short. And I don’t want to fight with people, man. I don’t want to walk around and be upset. I’ve been upset most of my f****** life and I didn’t get to enjoy my childhood, which saddens me a lot. But it is what it is, man. I’m here and I’m trying to live right now, and that’s what matters. And all the cameras in my face and everything, I’m cool with it because I’m enjoying the moment. I enjoyed the moment, I enjoyed walkout, I enjoyed the fight, I enjoyed every part of this process, because what would I rather be doing?”